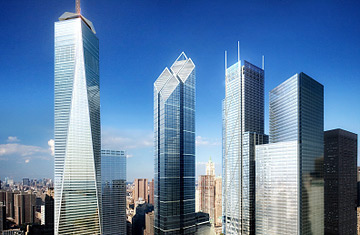 The nine new plans for Ground Zero include four that feature what would be the tallest buildings in the world, and two that create 16 acres of roof-top parks.

Seven design teams, made up of some of the best-known architects in the world, each went beyond the instructions to design a land-use plan, and created specific buildings and memorial spaces. Daniel Libeskind designed a 1,776-foot tower with public gardens, a building that he called "a park standing vertically." The United Architects group designed a group of five buildings that connect on the 60th floor to create a public skyway with gardens, shopping, a sports center and other places.

Where the first round of plans released by the Lower Manhattan Development Corporation in July were panned for all appearing the same, the new plans are aesthetically so different from each other--or at least presented in such different formats--that it is difficult to find points of comparison. "It's overwhelming," said Albert Capsouto, a member of the local community board.

Officials will use the nine new plans, as well as proposals by the mayor and the Port Authority, to determine a master plan by January 31.

Each of the plans adds to the city's skyline and sets aside the physical space where the Twin Towers stood, called the "footprints," for a memorial--one building reflective pools, another an amphitheater in the space. "It is no accident that every plan respects the footprints and restores the skyline," said development corporation president Lou Tomson. Many people had called for these two elements after seeing the first plans.

Each plan includes about the same amount of office and retail space that existed on the World Trade Center site before the attack, said Bob Yaro, president of the Regional Plan Association. "We're basically looking at nice architecture wrapped around the same program," he said. "We need to see some plans based on other uses."

Rick Bell, executive director of the American Institute of Architecture, answered questions about the new plans.