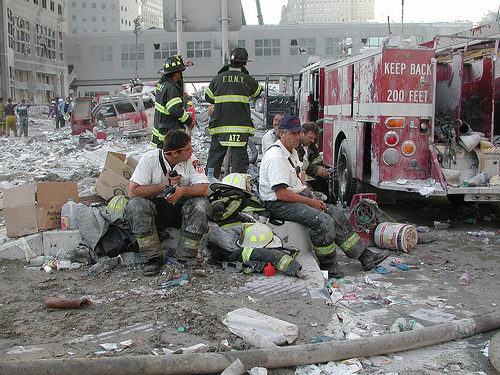 When the Republican National Convention comes to New York City in late August, George W. Bush will descend upon Ground Zero in a helicopter, turning the site into a grand backdrop for his speech accepting the Republican presidential nomination. This carefully planned event will top off four days of celebration of the president's response to September 11.

Actually, this scenario is not going to happen, says Rori Smith, who works as a spokesman for the Republican National Convention, but it is what many New Yorkers seem to believe. Smith spends much of her day refuting a steady stream of such baseless rumors. She and the other convention planners insist that they will stay completely away from downtown; they vigorously deny that Ground Zero will play any role in the convention.

Some are skeptical, especially since the site of the 9/11 attacks has already been playing a role in the presidential campaign.

In early March, the Bush/Cheney campaign broadcast television ads with images of the site in the days after the attacks.

The ad was too much for Adele Welty, whose son Timothy was a firefighter killed on 9/11. "Using footage of one of the brothers being carried out of the wreckage and not knowing who it was - it could have been my son - it is an affront to me," she said.

Many, like Welty, believe that Ground Zero's existence illustrates government failure, not success, and should be left out of the political campaign entirely.

Others, however, argue that 9/11 and the city's and nation's response to it are legitimate symbols of patriotism and resilience and so are appropriate things for voters to keep in mind on Election Day.

As the federal 9/11 Commission moves its hearings from Washington, D.C. to New York City in May (See: New York and the 9/11 Commission) and the Republican convention comes to New York this summer, the debate over what Ground Zero symbolizes and how it should - or should not - be used in politics is sure to heat up.

THE POLITICS OF TRAGEDY

September 11, 2001 has presented a tricky political issue for local elected officials, forcing them to walk a fine line between celebrating heroism and exploitation.

Former Mayor Rudolph Giuliani became a national hero after September 11, and was even named Time magazine's 2001 "Man of the Year." However, when 2001 Democratic candidate mayoral candidate Mark Green said he thought he would have done as good a job or better if he had been mayor - a comment he made to reassure voters - many New Yorkers were appalled.

Governor George Pataki, who often mentioned Ground Zero and the rebuilding efforts during his 2002 reelection campaign, was careful not to run any TV ad that specifically mentioned the attack or showed footage of Ground Zero. However, after winning reelection to his third term, the governor was forced to defend himself when it was reported that he hoped to lay the cornerstone of the proposed World Trade Center tower during the Republican National Convention. The next day, a Pataki spokesperson said the idea had been scrapped.

"There is one clear lesson nationally that everyone should take from New York on 9/11, which is tread very carefully on this issue because you won't know you've crossed the line until you've crossed it," Robert Bellafiore, an advisor to Governor Pataki told the New York Times. "That line separates talking about it as a legitimate issue and exploitation, and that line shifts over time."

Some political analysts would argue that George W. Bush's presidency was defined by the day in September 2001 when he visited Ground Zero for the first time, and so it is perfectly appropriate to campaign on the terrorist attacks.

"This campaign is ultimately about the choice voters are going to face and who will lead during the extraordinary times we live in," said Ken Mehlman, Bush's campaign manager. "And obviously 9/11 was the defining moment of these times and because of that day, America has been at war and still is."

In March, the Bush campaign aired a TV ad picturing an American flag flying in front of the ruins of the World Trade Center. With somber music playing, this image fades into a scene of five firefighters carrying a flag-draped stretcher, presumably carrying remains of a body.

For many, the two or three seconds that Ground Zero appeared on screen were offensive.

"In his first campaign commercial, George Bush reached down and molested the dead," wrote Jimmy Breslin in Newsday.

A group of family members of 9/11 victims and firefighters reacted immediately, calling the ads offensive, and sparking a heated, if brief, controversy. Democratic presidential hopeful John Kerry soon joined the chorus of critics, while another group of family members released an “Open Letter to America” defending Bush's decision to run them. Newspapers carried stories for several days covering the reactions to the ads.

The publicity inspired a negative reaction nationwide. A week after the advertisements first aired, registered voters found the ads inappropriate by a margin of 54 percent to 42 percent, according to a Gallup poll.

However, when one compares Bush's use of an attack on America to what politicians have done in the past, some argue that the administration is being cautious.

Franklin D. Roosevelt didn't step carefully in his treatment of the attacks on Pearl Harbor in his 1944 presidential campaign, the last election when a foreign attack on U.S. soil could have been used as an election issue. Roosevelt didn't show up at the Democratic convention in Chicago, opting instead to give his acceptance speech via radio from the San Diego Naval Station, because, in his words, "the war waits for no elections." Then he flew to Pearl Harbor to kick off his campaign from the deck of the destroyer Baltimore.

"If you accept President Bush's premise that this nation is at war with terrorism," wrote David Broder in the Washington Post, a week after the Bush ads ran, "then you have to applaud the restraint his campaign has shown so far in exploiting the attack that began that war."

But the Bush ads may be risky for another reason. As recent events showed, Americans' views of 9/11 continue to change in response to events that the campaigners have no control over.

Scores of American troops have been dying in Iraq in April, as widespread uprisings have proven difficult to bring under control. Large bombings continue to underscore fears that the military is failing to halt chaos throughout the country. Meanwhile, the federal commission investigating the 9/11 attacks has raised serious questions about whether the Bush administration was sufficiently vigilant in its counterterrorism efforts before the attacks. The White House's reluctance to allow Condoleezza Rice to testify, and the bickering over the deadline for the commission's final report, have left some convinced that the Bush administration has been less than cooperative.

On May 18 and 19, the 9/11 Commission will bring its hearings to New York, and provide a more local angle to the federal investigation. Former Mayor Giuliani, a supporter of President Bush, is expected to testify, as are other emergency response officials.

Revisiting the government's successes - but also its missteps - may raise additional problems for Republicans who are coming to New York City for the national convention this summer.

"If the convention was this week, I would say it was a terrible idea," said Norman Adler, a political consultant for both Republicans and Democrats, in April. "[But] the electorate has a memory that usually lasts about one and three quarter days. The events in April may not resonate in September."

USING - BUT NOT USING - NEW YORK

Claims by Republican National Convention planners that Ground Zero did not draw them to New York have been met with much skepticism, largely because the 2004 convention is such an exception.

The convention's start date is the latest of any political convention in modern history, with it closing a week before the third anniversary of 9/11. The 2004 gathering will be the first Republican convention to take place in New York City in the 150 years that the party has existed. By coming to what many Republicans regard as hostile territory, the GOP is bucking the trend of convening in friendly or contested states.

There are good reasons for this, which have nothing to do with 9/11, insist Republicans. Mark Pfeifle, communications director of the Republican National Convention, claims New York City as a Republican success story. The city has done well under the Giuliani and Bloomberg administrations, he said, just as the state has done well under Republican Governor Pataki. Brushing aside suspicions that the convention was timed to correspond with the third anniversary of 9/11, Pfeifle and other planners say that they simply wanted to avoid competing for airtime with the Democratic National Convention in late July or the Olympics in early August.

Besides, they add, New York City gave the Republicans such a sweet deal that they couldn't afford to refuse it.

"There wasn't any outright sense that the convention planners or organizers had factored in that horrific moment in our history," said Paul Elliott, communications director of the NYC Host Committee. "The mayor was clear that this was an agreement largely based on both parties being able to serve one another's interest [financially]."

Many others have found it easier to explain the Republican's unusual choice by factoring in the emotional resonance of 9/11.

"The president sees the war on terror being the main issue confronting our country for the next generation," said Peter King, a Republican Congressmember from Long Island. "New York, and New York City in particular, symbolize the courage and determination that we need to win that war. New York has really become the symbol of fighting back. To that extent, it really serves a purpose."

Many New Yorkers are wary of the Republicans' intentions and are dubious of claims that the convention won't incorporate Ground Zero into its agenda. This could prove a risky political situation.

How much cheering the Republicans get, it seems, will depend on two things; first, how issues like the 9/11 Commission and the war in Iraq look; and second, how successful the Republicans are in coming to New York and holding an enormous party days before the anniversary of 9/11 without offending too many people.