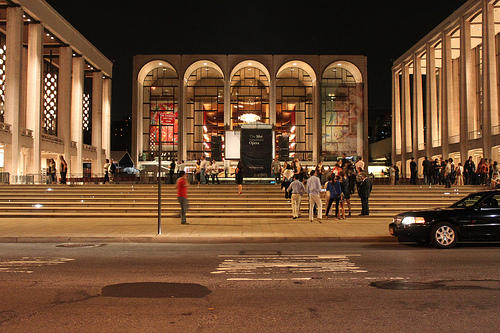 Robert Moses never cared all that much for the performing arts, but he sure could put on a show. On May 14, 1959, the master builder brought President Dwight Eisenhower to New York for groundbreaking festivities at the future site of Lincoln Center.

As soon as Ike turned the first spade of earth, Leonard Bernstein, the dashing young music director of the New York Philharmonic, launched the orchestra and a choir from the Juilliard School into Handel's "Hallelujah" chorus.

The ceremony was a grand prelude to an even greater spectacle - the wholesale remaking of the Upper West Side. By the late 1960s, Moses would utterly transform a rundown neighborhood into a cultural hub, obliterating the very streets and lots, ironically, that Bernstein had brought to life on stage in "West Side Story" just a decade earlier.

Lincoln Center's creation marked the first time that a city attempted to use the arts as a catalyst for urban renewal and economic development on such a vast scale. It was the project that, as Moses biographer Robert Caro wrote, "best revealed the vast breadth of Moses'creative, city-shaping imagination." Over the years, Moses' vision would be adopted by cities across the country seeking a way to attract people and investment to their moribund downtowns.

Today, though, 44 years after Eisenhower stuck his shovel into the ground near the bustling intersection of Broadway and Columbus Avenue, Lincoln Center finds itself at a turning point. Some of its facilities are outdated and will need costly repairs. The New York Philharmonic has given up altogether on acoustically challenged Avery Fisher Hall and plans to return to Carnegie Hall, which it left in 1962. The New York City Opera might also bolt in a few years for a new house, either at Ground Zero or some other location.

The strains have led many to ask whether the concept behind Lincoln Center is still valid - and if it ever was. New Yorker architecture critic Paul Goldberger recently wrote that rather than serving as a hub of activity for the West Side, Lincoln Center has become the "hole in the middle of the doughnut."

"The idea of a cultural campus set apart from the city never made much sense, even though Lincoln Center did, to be fair, promote the urban-renewal effect that Robert Moses intended," Goldberger wrote. "The neighborhood would probably have been gentrified without Lincoln Center, of course, but hardly in the same way, or on the same timetable."

Goldberger's complaints are chiefly with Lincoln Center's architecture and its relationship to the cityscape. But as Lincoln Center embarks on a major renovation program, it also finds itself answering questions about its artistic and economic viability. Does the concept of a cultural campus still make sense? Would dispersing its component companies promote growth elsewhere? What kind of future does Lincoln Center have if one or perhaps two of its major constituents leave?

Moses was far less interested in helping artists and musicians than he was in using them as a magnet for development. On 15 acres that had been largely filled with boarding hotels and sagging tenements, Moses assembled a university, two opera houses, a concert hall, a library, a music school, several theaters, a public plaza, a park with a band shell and an underground parking garage. The construction displaced thousands of families. But Moses certainly succeeded in attracting builders.

From his office, Reynold Levy, the president of Lincoln Center, can see highrises almost everywhere. Across the street from his window, cranes mark the site of a new apartment tower opposite Avery Fisher Hall. To the south, the twin-towered AOL Time Warner Center, which will include the new home of Jazz at Lincoln Center, nears completion.

"I don't know of anyone who doesn't credit Lincoln Center for helping to galvanize this extraordinary amount of economic development around it, from its beginning to this day," Levy says.

According to Lincoln Center officials, taxable property in the Lincoln Square neighborhood appreciated 1,724 percent from 1963 to 1999, compared to 309 percent growth for Manhattan as a whole. The additional growth represents an extra $154 million in property tax revenues for the city each year.

Overall, Lincoln Center officials attribute $675 million a year in direct and indirect economic activity within the city to their complex. While some of that activity would have been generated by arts groups whether Lincoln Center existed or not, Levy says that clustering these organizations creates a sort of multiplier effect that draws business and activity.

Indeed, these days, big retailers and book and record superstores call the Lincoln Center area home, attracted by the crowds that are regularly drawn to New York's cultural megastore. And it's not just concert- and opera-goers who fill the streets around Lincoln Center. Business leaders say the performing arts center has brought residents back from the suburbs and kept others from moving out of the city.

"It's still crucial to the economic viability of this neighborhood," says Monica Blum, president of the Lincoln Square Business Improvement District. "Five new buildings are going up in the neighborhood or have just been completed and there's been a 13 percent increase in population just since the last census. People want to eat here and want to shop here. In many instances, it's the Lincoln Center patrons who want to live here."

Bringing arts organizations together also stimulates creativity, Lincoln Center officials say. True, it's impossible to attend more than one performance at a time, but performers and administrators can benefit from proximity. The result can be programs that cross disciplines, examining an idea or an art form both on stage and, say, on screen through the Film Society of Lincoln Center.

That kind of collaboration will become more prevalent in the future, Lincoln Center promises, as it develops programs to fill Avery Fisher Hall once the Philharmonic leaves. Levy suggests that Lincoln Center's diversity could, for instance, attract visiting orchestras for extended residencies by offering symphony musicians a chance to perform at the Met and giving visiting conductors opportunities to work with young musicians at Juilliard.

Economic and artistic opportunities have driven a number of cities to emulate Lincoln Center's example, even as the original has come in for criticism at home. Cities ranging from Newark to Philadelphia to Dayton, Ohio to Kansas City have recently completed or begun their own performing arts centers modeled on the idea that the arts can spur an urban renaissance.

Still, even Lincoln Center's supporters acknowledge that changes are needed. "I think it's lost its luster," says Blum. "It needs polishing."

The plaza, with its famous fountain in the center, looks great on postcards and comes alive when events such as Lincoln Center Out-of-Doors are scheduled, but it can be a cold and forbidding place at other times. The travertine stone that covers most of the buildings is flaking off, a victim of wear and pollution. Most critically, just about every group needs more space and nearly all the facilities will have to be modernized if they are to live up to their reputation as being world-class.

At one time, a $1.5 billion proposal was on the table that would have included a thorough renovation of Lincoln Center, including the rebuilding or replacement of Avery Fisher Hall for the Philharmonic. Also floated was the idea of placing the entire plaza under a glass canopy designed by celebrity architect Frank Gehry.

Economic realities, however, forced Lincoln Center to proceed more modestly. The organization has hired the architects Elizabeth Dillard and Richard Scofidio to help knit Lincoln Center into the fabric of the West Side by removing the barriers to street life that were part of Moses' original suburbanizing impulse.

West 65th Street, which now resembles a dark tunnel, will be narrowed and turned into a street-level showcase. The bridge over the street will be removed and screening rooms and glass-fronted studios will give passersby a view of artists at work, creating a new attraction much like the Today show's transparent studio at Rockefeller Center. Also planned for the northern end of Lincoln Center are an eatery, a bookstore, a boutique and a TKTS booth that will make it easier to attend a performance on a whim.

Levy says 65th Street would serve as a lively counterpart to Lincoln Center's other open spaces, which many people consider a refuge from the city streets.

"Our aim is to achieve the best of both worlds, to retain the serenity, the peace and the openness that Lincoln Center now affords . . . and at the same time to infuse some vitality and bring energy off of Broadway into 65th street," he says.

Whatever people think of Lincoln Center, one thing is certain - it is here to stay. And while some of the ideas that led to its birth are now out of favor among planners, Lincoln Center's legacy is undeniable.

As Hilary Ballon, a Columbia University professor of art and architecture, wrote in a recent New York Times article, "Moses is now widely regarded as the antihero of modern planning, but his approach to urban renewal at Lincoln Center was bold and influential. Lincoln Center embodies the proposition that the arts are an indispensable element of good urbanism. From the Georges Pompidou Center in Paris to the Guggenheim Museum at Bilbao, Spain, it has proven a valid and enduring idea."