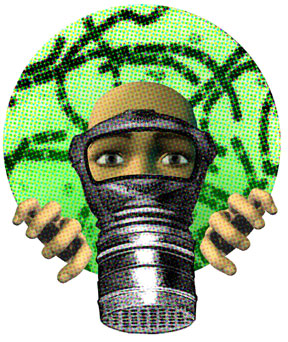 As the number of anthrax exposures continues to increase, and with disruptions at major news organizations in New York, Governor Pataki's New York City office and the United States Congress, fear of the disease is spreading much faster than the spores.

The only antidotes for this terror are information and then appropriate action.

REASONS NOT TO PANIC

First, all forms of anthrax -- the inhaled form (pulmonary), the swallowed form (gastro-intestinal) and the skin type (cutaneous)-- are readily treatable. The anthrax which is currently being sent through the mail is susceptible to numerous types of antibiotics (including the very first antibiotic, penicillin), not just high-tech Ciprofloxacin. The disease is not contagious from person-to-person. If you believe you may have been exposed and want to know what the potential symptoms are, go to the Centers for Disease Control web site. Exposure does not mean infection, however. Most people who have tested positive for exposure will not develop disease even without treatment. Those known or suspected to have been exposed are given treatment just to be sure.

Secondly, the bleak data on survival rates from the most lethal form-- pulmonary anthrax -- was collected either before antibiotics or other modern supportive technology like respirators and IV fluids were readily available or from places like the former Soviet Union where access to appropriate treatment was uncertain and often delayed. Death rates are likely to be far lower than the reported 90 percent with antibiotics, quick discovery and modern supportive care.

The man in Florida who had the second reported U.S. case of pulmonary anthrax is recovering, and he is 73 years old. Elderly and very young people are usually at greater risk of dying from most infections, but the seven month old infected with the cutaneous form is also doing well. Cutaneous anthrax is fatal in only 20 percent of cases if untreated. With treatment, it is even less likely to be deadly. Gastro-intestinal anthrax has not been reported here, but it has a 25 percent to 75 percent fatality rate.

The odds that any particular person will get affected are also extremely low. "The post office handles 680 million pieces of mail per day," says Hillel Cohen, a doctor of public health and Assistant Professor of Epidemiology and Social Medicine at the Albert Einstein College of Medicine, "There have been half a dozen letters over three weeks. The odds of one coming across your desk-- [and coming across in a way likely to produce disease]-- are very low."

Even with the small number of cases reported so far, our public health system is having difficulty coping. A much greater risk than anthrax may be panicking over bioterror and trying "quick fix" solutions that won't ultimately protect people from either terrorists or natural diseases.

"The entire infrastructure is flawed and aching in budgetary pain," says Laurie Garrett, author of "Betrayal of Trust: The Collapse of Global Public Health, "The system is stretched to the max."

The run on Cipro, for example, could have been stemmed by giving the public better information. "As far as we can tell, this is garden variety anthrax which can be treated with penicillin," says Garrett, and asks why the more-expensive Ciprofloxacin is being promoted as the key treatment.

Ciprofloxacin was until recently the only FDA-approved drug for pulmonary anthrax -- though doxycycline and penicillin have just been approved by the government to try to stem the Cipro panic. The choice to use Cipro as a first treatment was made with the assumption that "weaponized anthrax" would almost by definition be designed to be resistant to most antibiotics. Since inhaled anthrax can kill so quickly, experts reasoned that when the first shot at a cure is likely to be the only shot, the drug used should be the one most likely to kill resistant bacteria.

With exposure or infections resulting from bacteria known to be penicillin-susceptible, the rationale behind the use of Cipro fails. And, with a rush on pharmacies and the Internet by the "worried well" for the antibiotic, there is a real danger that bacteria other than anthrax may develop resistance when people use the drug inappropriately. Even worse, Cipro-resistant bacteria tend to be resistant to a whole class of drugs -- so by rushing too soon to the treatment of last resort, its effectiveness can be decreased for much more common serious infections.

"No doctor should be writing Cipro prescriptions for the worried well," says Garrett. "It's irresponsible medicine."

Cohen agrees. He also points out that many of the experts on bioterror-- the government, politicians, the military, the media-- have an agenda. "People have a variety of reasons for promoting biological terrorism as an imminent danger. What's happening now is the result of groundwork to promote this or that program which goes back to the Gulf War. It is almost a type of psychological warfare against your own people-- you get them so scared that they are willing to support anything."

Cohen believes that the best way to fight biological warfare is with a beefed up public health system and with treaties against its use. "It's particularly ironic that just before September 11th, the Bush administration vetoed an extension of the Biological Weapons and Toxins Convention," he says, "which would have allowed inspection and enforcement."

Cohen cites the idea of increasing defensive research as an example of how some efforts to maximize safety could backfire. "The more places that are handling highly toxic material, the more of it there is and the more risk there is of accident or theft. A General Accounting Office report was released in August which said that we have 10,000 tons of chemical and biological weapons which we were supposed to have destroyed and we are ten years behind schedule on eliminating them," he says.

While terrorists would obviously not open their labs to inspection under treaties, the vast majority of them get their materials from legitimate researchers or government stockpiles -- so the rarer the deadly materials are, the less likely they are to be misappropriated.

Some experts argue, however, that fear of bioterror can help promote needed public health funding more generally. Cohen is skeptical of this "dual-use" argument. "The problem is, it totally distorts public health priorities. More money for general surveillance is good but if you spend millions vaccinating people against smallpox, that's money you are spending fighting [a hypothetical risk] when 20,000 people are dying of flu every year."

Cohen points out that neglecting basic public health measures like food inspection, mosquito and rodent control have already had effects. Budgets for mosquito control, for example, were cut several years before the West Nile virus outbreak. Garrett gives another example of failure involving a mosquito-borne disease from which some die by bleeding to death: 'We have a dengue fever outbreak in Hawaii right now and the health department can't diagnose cases in less than two weeks. And that's a simple organism in the middle of an epidemic." Errors in handling the suspect anthrax letters by investigators, lab problems and miscommunication between agencies illustrate how stretched the system is even with a limited number of cases.