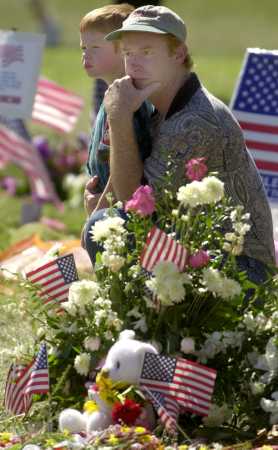 This has been a terrible week filled with horrific images. We have had to explain to our children things that are incomprehensible to us. The days ahead will continue to be filled with pain as we learn about the losses of friends, relatives and acquaintances. I am concerned about what follows then. It has been said on broadcast after broadcast that American life will never be the same again. Rather than waiting for the changes to happen to us, perhaps wehave an opportunity to choose the changes we would like to occur.

I am an educator, so I will talk about the schools. We have a moment in which we can choose the values we want our children to learn in their classes. Amid reports of Arab citizens or visitors being harassed, I would like my children taught about tolerance and the strength that diversity brings.

In a time when our television screens are filled with stories of heroic volunteerism, I would like my children to learn about altruism, and the responsibility of service. This is a good time for schools to add vitality to service requirements that have grown dusty and disconnected, to make service not simply an extracurricular activity but an active part of the curriculum.

In an age in which voting rates and participation in civic life has declined, I would like my daughters to learn about community. Never have there been more vivid demonstrations of the meaning of community than we are seeing on our television screens today. Schools have the opportunity to take that experience and translate into an education which helps students learn the ways and meanings of civic participation, the power of and the mechanisms for dissent, and the manner in which individuals and groups can constructively change our community.

In an era in which America is inextricably interconnected with the rest of the world, as September 11 painfully showed us, I would like my children to learn about the world in a manner we have never before accomplished. The canon of literature our children read should be expanded beyond western writings to include global works, not because this is politically correct, but because it is essential. For example, I can no longer imagine a great books curriculum that does not include the Koran. This is a work that has had a profound influence on our country; in fact, on every presidency since Jimmy Carter. It would be good to teach more about other nations, their languages, and the meaning of a global society. It would be practical to have our children spend time in other countries and to make a concerted effort to invite foreign students and teachers to this country -- even when there may be pressure to do exactly the opposite in the aftermath of the World Trade Center disaster.

In our schools and even more so in our homes, the real challenge will be not to match the values with our words, but with our deeds. If there is any inconsistency, our words teach children the ideal and our deeds teach them how much one can safely ignore the ideal.

Arthur Levine is president of Teachers College, in Columbia University.