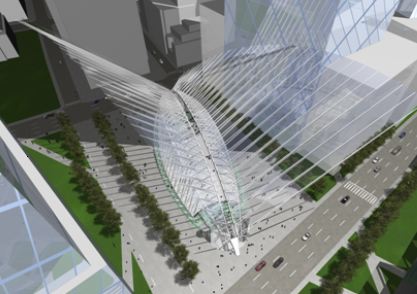 On an oversized sketchpad, famed Spanish architect Santiago Calatrava drew a sketch of pair of children's hands releasing a bird into the air. This image, he told the audience who had gathered to see him at the Winter Garden on January 22, was the root of his plan for a permanent train station at Ground Zero. He then grabbed another marker and, over his previous drawing, drew the design that many are already referring to as downtown's Grand Central â€“ an oval of glass and steel with wings rising from its spine.

This, in broad strokes, was the third major piece of architecture for Ground Zero to be presented to the public in the last two months, and part of yet another extravagant "unveiling." The previous ceremonies, for the freedom tower and the memorial, have inspired intense anticipation, attracted large crowds, and received mixed reviews. While the presentation for Ground Zero's train station drew fewer people and less emotion, those in attendance seemed uniformly dazzled. 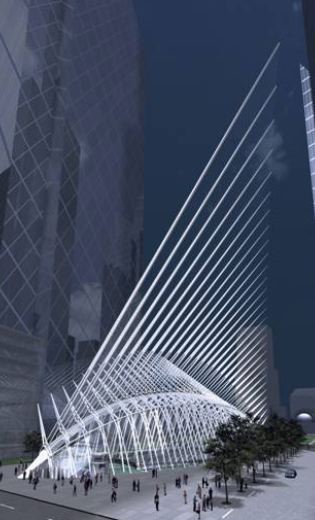 Construction for the station, for the Port Authority Trans Hudson or PATH train, is expected to begin next year. It will begin carrying riders in 2006, and will be completed by 2009. The cost of the station is about $2 billion, much of that coming from federal money earmarked for Lower Manhattan transportation after 9/11.

Calatrava said that the main intention of his design was to "use light as a construction material." The steel, concrete and glass pavilion at ground level is essentially a skylight for the station's lower levels, allowing daylight to travel 60 feet straight down to the tracks below.

By creating covered areas around the station, the block-long, 150 foot-tall wings serve to protect visitors from wind and rain. On more favorable days, the roof retracts, a sort of train-station-skydome that opens the station to fresh air.

The large wings are the station's most striking visual feature. But Calatrava intends the roof of the PATH station to be more than a grand architectural gesture; it serves practical purposes as well. A building that relies on the sun for much of its light needs to use less energy from other sources, he said, and a retractable roof offers safety in the case of fire.

Calatrava is best known for applying this kind of expressive architecture to bridges and train stations. When the Port Authority chose Calatrava, along with architectural-engineering firms DMJM + Harris and STV Group, Inc., to build the station at Ground Zero in July 2003, Herbert Muschamp of the New York Times proclaimed that Calatrava was "the world’s greatest living poet of transportation architectureâ€¦Long before the word 'infrastructure' had entered the lexicon of contemporary architecture, Mr. Calatrava had taken this genre of design to the level of genius." 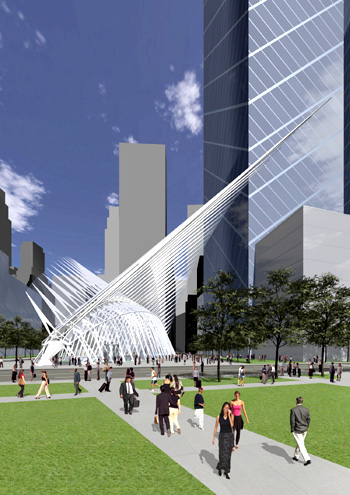 In contrast to the Memorial and the Freedom Tower, which have departed in many ways from Daniel Libeskind’s master plan for the site, Calatrava’s station uses one of the major elements of the plan as a starting point for its own design. The wings that run the length of station frame the "wedge of light," a public space envisioned by Libeskind that is designed to have no shadows on September 11 of each year from 8:46 a.m., when the first tower collapsed, to 10:28 a.m., when the second fell, accenting further this element of the original master.

"This is how architecture develops out of master plan," said Mark Ginsberg, president of the New York Chapter of the American Institute of Architects. "The master plan had this strong idea of the wedge of light. Calatrava took that and used it to in certain ways generate his building, making something that is a wonderful sculptural element and an icon in the city and for the site, but also by in some ways modifying the ideas of the master plan strengthening [it]."

The station will eventually connect to the Fulton Street subway station, which is currently being renovated by the Metropolitan Transit Authority in a plan that will be presented to the public this spring. In all, 14 subway lines will be accessible from the station, which will also connect to ferry service and airport rails. It will also include pedestrian access to the World Financial Center. Many hope that it will serve as the centerpiece for a regional system of transportation that will rejuvenate downtown Manhattan.

"Much as the rehabilitation of Grand Central Terminal has sparked the revitalization of midtown, the restoration and enhancement of Lower Manhattan's transportation system will accelerate the economic recovery of the nation's third largest business district," said Port Authority vice chairman Charles Gargano at the unveiling.

Calatrava's building was being referred to as the Grand Central's downtown equivalent long before his sketches were made public. Now Calatrava himself has reaffirmed this hope. He referred to the midtown station as the "most beautiful public hall of any station in the world," adding that it was probably the "deepest inspiration" for his design.