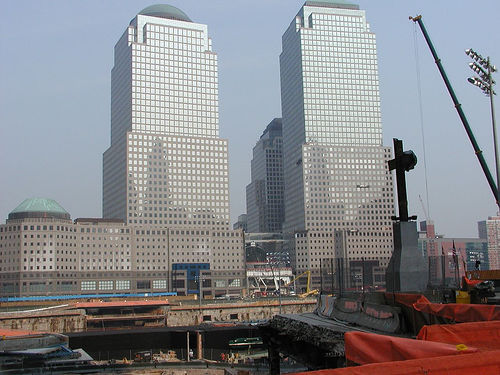 Thousands of New Yorkers became interested in urban planning because of 9/11, a phenomenon that startled many urban planners. A project of such large scale that had to incorporate the opinions of a vast number of people sparked serious debate on several levels. Some saw the need to build quickly; others wanted to pause and reflect. With emotional appeals arguing both for leaving the site empty and rebuilding the towers exactly, the difficulty of finding consensus was apparent.

The job was given to a newly formed governmental agency, the Lower Manhattan Development Corporation, which had to find a way to produce a tangible plan out of the conceptual debate. New Yorkers roundly rejected its first attempt.

It was over a year after the attacks that an international competition yielded a master plan for the site, and architects began working on the different pieces of the development. But one year ago, New Yorkers still had little idea what a redeveloped Ground Zero would actually look like.

That changed over a ten-week span starting in November 2003, when the three major pieces of architecture for Ground Zero were presented to the public:

Memorial:
Eight finalists out of 5,201 entries in the international competition to design a memorial for Ground Zero were picked in November. The winner, a young architect named Michael Arad, designed two sunken pools for the sites where the Twin Towers had stood, surrounded by an austere plaza. Two weeks after its selection in January, Arad and landscape architect Peter Walker revised the plan to address criticisms that it was creating a cold, bare space. The pools remain the central feature of the plan, but they are now to be surrounded by a lush garden of trees and plantings.

Freedom Tower:
Aside from the memorial, the highlight of Daniel Libeskind's master plan for Ground Zero was a 1,776 foot tower , with an asymmetrical spire meant to evoke the Statue of Liberty. In late December, Libeskind, along with David Childs, an architect working for developer Larry Silverstein, presented the Freedom Tower -- a twisting skyscraper topped by a huge open air space, enclosed in cables, holding huge windmills which would produce 20 percent of the building's energy. While the two men claimed to have worked together, the building was much larger than Libeskind's original vision, and many believed Libeskind had been sidelined in its design.

Transportation Hub:
While both the Freedom Tower and the memorial have had their share of critics, the transportation hub designed by Santiago Calatrava has been met with near unanimous acclaim. Calatrava presented his building - a steel and glass structure flanked by two enormous glass wings that move to allow the roof to open - in January.

With the major elements of the master plan firmed up, the symbolic beginning to construction at Ground Zero took place on July 4, when the cornerstone to the Freedom Tower was put in place at Ground Zero. Governor George Pataki - who has adopted the speedy rebuilding of the site as a priority of his administration - heralded the event as the start of the next stage in the site's rebirth. But skeptics see troubling uncertainty in the site's future.

Libeskind's master plan, some say, has lost the primacy that it held soon after winning the international competition to design the site. Different architects have chipped away at the plan, replacing some of its key elements with their own visions as they design portions of it. Designs for the two planned cultural buildings, to be decided upon soon, could continue to move away from the plan. Libeskind himself is competing to design one of these buildings, which would, presumably, keep in line with his original vision.

Whether architectural changes are an evolution of erosion of Libeskind's plan is a point of debate, and even if the architect is losing traction it doesn't pose a fundamental threat to the site. More dangerous, some worry, is the increasing lack of clarity about how Ground Zero's development will be paid for.

In May, a court decision over how much insurance money Larry Silverstein will get because of 9/11 dealt the developer a big blow. Silverstein, who was seeking about $7.1 billion in insurance funds, suddenly would get no more than $4.5 billion. He said that the court verdict would not limit his ability to redevelop Ground Zero; the Lower Manhattan Development Corporation, the government agency in charge of the redevelopment, backed his claim. Others expressed skepticism that Silverstein would be able to pay for the entire site's development.

The financing for the major elements of the plan - the Freedom Tower, the memorial, the transportation hub, and the cultural buildings - will be unaffected by the lawsuit. But when the other four office towers will be built, and whether it will be Silverstein who builds them, is in doubt. Some don't think this is necessarily a bad thing.