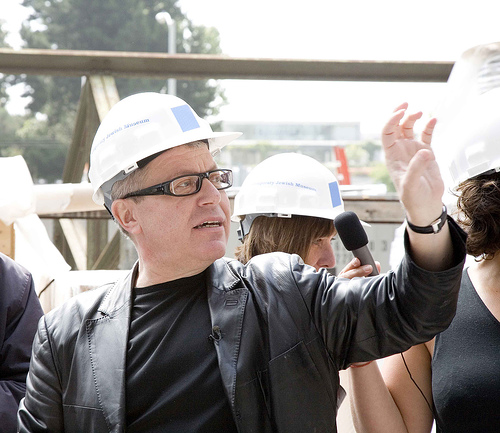 One year ago, Daniel Libeskind won a competition to design the former World Trade Center site. Some would hesitate to continue to describe him as a winner today.

Libeskind's plan has been changed significantly in the past year, as has his perceived role in the development of the site. But because it was never clear what Libeskind's role was in the first place, there is now disagreement as to whether these changes constitute the plan's evolution or its betrayal.

Even when the Lower Manhattan Development Corporation first invited Studio Libeskind and six other architectural firms downtown, it was not clear what the corporation wanted from them. The public had rejected the original plans that architects Beyer Blinder Belle had produced for the site, and new ideas were needed. So the Lower Manhattan Development Corporation launched a 'design study' to gather ideas from the world's leading architects. It insisted that the study was not a competition, and would not result in a winner being chosen as the site's master planner.

Several months later, Libeskind was declared the winner of the non-competition, and was named the master planner for the site, largely because the Governor was inspired by his vision for a building he was not contracted to design. With that, Libeskind’s plan became the plan for Ground Zero.

But nobody really knew what that meant.

Officials began speaking about his design as if he would not only determine the size and shape of the buildings, streets and open spaces â€“ as a master planner normally does â€“ but also that the appearance of the structures built on Ground Zero would follow "the Libeskind vision."

Civic associations, like the Civic Alliance, New York New Visions and Rebuild Downtown Our Town, have been in favor of granting Libeskind a lofty mandate, because his plan had been chosen after intense public discussion that they helped organize. Civic groups have often been the loudest advocates of the inherent value of keeping each individual element closely in line with Libeskind's plan.

Despite the supposed support of public officials and civic groups, though, the plan has gone through major changes over its first year in existence.

A YEAR OF CHANGES

Libeskind's original plan divided the former superblock of the World Trade Center into four smaller blocks by extending Fulton and Greenwich streets through the site. It envisioned a sunken memorial site on the spot where the Twin Towers stood, surrounded by irregularly shaped towers, the tallest of which was a 1,776-foot skyscraper with an asymmetrical spire that Governor George Pataki has dubbed the Freedom Tower.

Since then, the plan for the site has changed significantly.

Changes to the plan were made at four points throughout the year.

Libeskind presented a revised version of his master plan in September. The buildings forming the spiral around the memorial site became slimmer, taller, and squarer, providing more office space but a lessening the dramatic spiraling effect that Libeskind intended to create. The Deutsche bank building site was added to the plan, reducing density on the site and providing a place to provide additional underground infrastructure.

The Freedom Tower, which won over Governor Pataki, played a key role in Libeskind’s selection as the master planner for Ground Zero. The architect obviously wanted to play a major role in its design. But when Larry Silverstein appointed his own architect, David Childs, to work on the building, Libeskind was given the vague role of collaborating architect. What followed turned into a messy power struggle between the two architects.

In December, Libeskind and Childs presented the Freedom Tower -- essentially a building designed by Childs. The twisting tower was larger and heavier than Libeskind had wanted. Its major gesture to Libeskind’s original design, the asymmetrical spire, was generally viewed as a badly integrated afterthought.

The most significant change to the plan was made this January when the memorial jury selected Michael Arad and Peter Walker's 'Reflecting Absence' as the winner in the memorial.

Michael Arad's original design was the memorial finalist that changed the Libeskind plan the most. It eliminated the sunken pit for the memorial, and removed Libeskind’s proposed cultural buildings from the memorial site. The revisions that Arad and Walker made to the plan in the two weeks after it was picked as the winner brought it slightly closer to the plan, mainly by replacing the cultural buildings with smaller ones in the same location. But it still erased what had been the defining feature of Libeskind’s original design.

Jury members later said that they made their decision with the conscious intention of eliminating the sunken memorial, which they felt was the weakest part of Libeskind’s design.

While the architects of the Freedom Tower and the memorial strayed from the Libeskind plan, Santiago Calatrava, who designed the transportation hub, took one of Libeskind’s more fanciful ideas and used it as the basis for his building.

From the beginning, skeptics have singled out Libeskind’s 'wedge of light,' as a weak point in his plan. Many questioned whether Libeskind’s idea for the plaza â€“ designed to be shadow-less on September 11 of each year between 8:46 AM, when the first plane hit the first of the Twin Towers, to 10:28 AM, when the second tower collapsed â€“ was plausible. But Calatrava focused on it; the steel-and-glass train station he presented in January centered itself to allow the wedge of light to run between its two huge 'wings.'

Calatrava’s station did change the plan slightly. Because the station was a different shape than the one that Libeskind had planned, it created a plaza on one side.

At Ground Zero, the master plan’s influence was limited by the fact that it was never really finished. Usually if a master plan were to include a sense of how the buildings in the area should relate to one another visually â€“ what might be described here as the "Libeskind vision" â€“ the planner would make clear design guidelines for the architects to follow. But because of the swift pace of the site’s development, such guidelines were not produced before architects designed the defining features of the plan.

Still, some feel that Libeskind’s appointment implied the right to control each element of his plan.

"It was clearly my impression that they were dealing with a concept as well as a master plan," said Beverly Willis, head of civic group Rebuild Downtown Our Town. “If the public, the city government and the state government debate a series of proposed plans by the world’s greatest architects, and they decide on one, that decision should be final."

The question of whether the changes to the Libeskind plan represent its evolution or its erosion is most difficult in terms of its relationship to the memorial. Officials and civic organizations have found it particularly challenging to reconcile their views on two processes they supported: the public dialogue which endorsed a strong role for a master plan, and an independent jury process that selected a memorial that changes that plan significantly.

"A jury decided to pick a scheme that didn’t seem to work well with the master plan,” said Mark Ginsberg of civic group New York New Visions. "We're now in a position where we’ve done two things very well that have to be resolved."

Without a clear role, Libeskind's job has never seemed sure of what his job was. He fought bitterly to design the Freedom Tower, but praised highly a memorial that made much more significant changes to his plan. Today, Libeskind seems to see himself playing a much different role than he did a year ago. He now seems eager to cede responsibility for key projects to those architects who have been out in front on them.

After Arad and Walker presented their revised memorial to the public, Libeskind met with a group of downtown residents to discuss his plan. He deflected all questions about the elements of his plan that had been designed by others, and spoke of himself taking on the long-term task of organizing “the great complex puzzle of elements” at Ground Zero, not designing the individual parts:

"Long after the politicians are gone, long after architects have finished designing, long after people have moved on to other things, I’ll still be here."