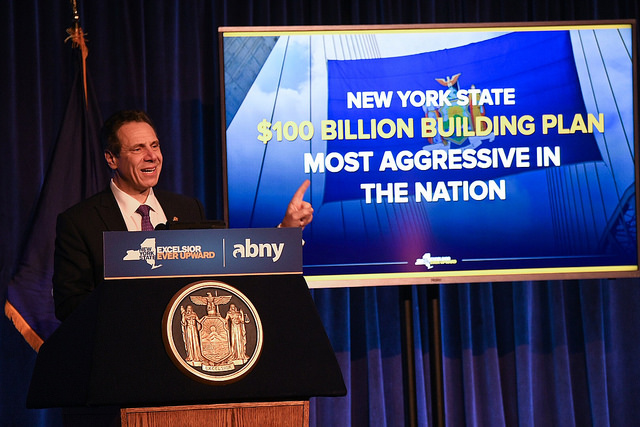 With the specter of a competitive Democratic primary squarely in front of him, Governor Andrew Cuomo, the two-term incumbent, announced on Wednesday, April 4 that he had brokered a unity deal between two groups of Democrats in the state Senate, setting the stage for the possibility of capturing the majority in the chamber, which is the only Republican stronghold in state government. Cuomo brought together the mainline Senate Democrats and the breakaway Independent Democratic Conference, a group of eight senators elected as Democrats but who have formed a ruling coalition with Republicans.

While Cuomo and Democratic leaders celebrated the unity plan, casting an optimist eye toward two key special elections happening April 24 and the fall elections wherein every seat in the state Legislature is on the ballot. The governor listed off policy priorities that he said were stymied by Senate Republicans and said Democrats must take the chamber in order to enact more progress.

The next day, Thursday, April 5, Cuomo gave a speech at a gathering hosted the Association for a Better New York (ABNY), a business advocacy group. In it, Cuomo highlighted aspects of the recently-passed state budget -- including attempts to mitigate any pain soon to be felt by middle and upper-income New Yorkers due to the new federal tax code -- and ongoing state infrastructure investments. The governor made no mention of the Senate Democratic unity deal he had celebrated the day before, nor did he repeat the list of policies, like campaign finance reform, that he said he intends to pass when Democrats control the Senate.

The choices appear deliberate, give that many in the ABNY crowd, where Cuomo routinely receives a hero’s welcome, may not favor a Democratic Senate. A number of the governor’s most prominent financial backers, including business and real estate entities, are also big donors to Senate Republicans and may not be pleased with the Democratic unity deal. While Cuomo has been roundly criticized by left-wing Democrats for accepting, if not propping up, the IDC and Senate GOP control, and therefore not passing enough progressive legislation, the governor has often been supported by the New York City business community, many members of which see him as like-minded: progressive on social issues but moderate on taxes and spending, friendly toward real estate developers and charter schools, and invested in major infrastructure improvements.

Indeed, in introducing Cuomo at the ABNY event, the Chairman of the ABNY board, Steven Rubenstein, praised Cuomo for passing marriage equality and gun control, as well as raising the minimum wage, undertaking major infrastructure projects, and passing timely budgets every year.

One of the most prominent members of ABNY is the Real Estate Board of New York, or REBNY, whose political action committee, The Real Estate Board PAC, has donated over $112,000 to Cuomo’s gubernatorial campaign committees. Meanwhile, it has donated $507,000 to the Senate Republicans’ campaign committee since 2009, which does not include donations to individual Senate candidate campaigns or independent expenditures.

“An entire state government made up of extreme, tax-and-spend politicians racing each other to the far left would be an unmitigated disaster for hardworking taxpayers Upstate, in the Hudson Valley and on Long Island,” said Scott Reif, a Senate GOP spokesperson, in a statement reacting to the unity deal. “It would lead to higher taxes, more corruption and thousands of families fleeing our state. More than ever before, we need checks and balances to prevent the radical New York City politicians from doing whatever the hell they want.”

At the April 4 press conference at his Manhattan office, Cuomo framed the unity deal as an opportunity to enact progressive reforms that have been blocked by the IDC and Senate Republicans throughout his governorship, such as bail reform, voting reform, the DREAM Act, campaign finance and voting reforms, and the Child Victims Act, to name a few.

“These are all progressive principles that were not passed in the budget and which we will not pass until we have a Democratic Senate,” the governor said.

Though Cuomo’s governance has moved leftward throughout his initial reelection bid and second term, the governor typically appears most comfortable in a position of moderate compromise and triangulation, happy to broker deals between the Democratic Assembly and Republican Senate, often at his own pace and with progressive accomplishments he has decided to own.

Cuomo’s style has alienated many on the left, leading the liberal Working Families Party to endorse the governor’s primary challenger, actor and activist Cynthia Nixon.

As labor unions left the WFP to side with Cuomo, he explicitly rebuked community advocates in the party, and reportedly threatened their existence.

With two special elections for vacated Senate seats taking place on April 24, the split between Cuomo and some of his most prominent backers who would prefer a Republican-led Senate is more clear. One election, for Senate District 32 in the Bronx, is a seat vacated by now-City Council Member Ruben Diaz, Sr. and is expected to remain safely Democratic. The other, District 37 in Westchester, is not so clear cut, and as a result has garnered significant attention and spending.

The governor has come out in full force to campaign for Shelley Mayer, an Assembly member and the Democratic candidate for Senate in District 37; meanwhile, the Real Estate Board PAC has financially supported Republican nominee Julie Killian, donating $11,000 to her campaign committee. Killian is also receiving significant support through the Senate Republican campaign committee, where the REBNY PAC has given generously.

According to NY State of Politics, REBNY’s independent expenditure arm, Jobs for New York, had spent at least $92,000 on Killian’s behalf as of late March.

Retaining the seat, vacated by now Westchester County Executive George Latimer, is crucial for Senate Democrats if they wish to take control of the chamber in the near future. As such, the seat has attracted not just high profile campaigners and direct campaign contributions, but hundreds of thousands of dollars in independent spending.

The largest spender in the race is New Yorkers for a Balanced Albany, a political action committee backed by StudentsFirst NY, an education reform entity that pushes for tougher teacher evaluations tied to standardized tests and expansion of charter schools. New Yorkers for a Balanced Albany has spent more than $800,000 on television and radio ads in the Westchester special election, according to campaign finance filings.

Notably, the Real Estate Board had donated $11,050 to Latimer’s campaigns for Senate, and $1,000 to his campaign for County Executive, according to the State Board of Elections.

Still, many in the business community have concerns about a Democratic state Senate. The Partnership for New York City, a business group, believes bluntly that it would be bad for business.

“The business community typically relies on Senate Republicans to step on the brakes when Democrats want to pass a bill that would damage the state economy,” said Kathryn Wylde, President and CEO of the Partnership. “If this were not an option, we would have to rely on good sense prevailing when a bad bill is introduced. Not always a safe bet in Albany!”

Many of the Partnership’s members are prominent donors to Cuomo’s campaigns, as well as to Senate Republicans. Overlap among the three can be seen in real estate donors, such as SL Green, Vornado, and Tishman Speyer, as well as donors in the finance and banking sector, such as Citigroup, JP Morgan Chase, Bank of America, and HSBC.

Whatever issues might or might not arise, Cuomo’s relationship with business doesn’t seem to have taken an enormous hit yet; the day after he announced the unity deal with Senate Democratic Leader Andrea Stewart-Cousins and IDC Leader Jeff Klein, Cuomo and MTA Chair Joe Lhota spoke to ABNY.

The MTA was a key focus of the program, with Cuomo touting new measures in the state budget to fund the system, and Lhota presenting on the next phase of his Subway Action Plan, which Cuomo had insisted the city fund half of, forcing the city’s hand through a budget mechanism. Cuomo, who did not mention his plans for a Democratic Senate, received several ovations.

A spokesperson for ABNY declined to comment for this story.

Gerald Benjamin, a political scientist and the Director of the Benjamin Center at SUNY New Paltz, doesn’t believe that the relationship between Cuomo and business will be significantly affected, because the relationship is more grounded in influence than ideology. Instead, special interests will try to influence whoever is in power, whether they be Democrats or Republicans in the Senate, Assembly, or Governor’s Mansion, he said.

“We have a long history of New York interest groups giving money to whomever is in power,” Benjamin said, “so that they can get influence over the decisions they would like to influence. So it’s common for New York interest groups, labor unions for example, to give money to Republicans in the Senate and the Democrats in the Assembly. And then give money to Republican governors and Democrat governors. They’re trying to influence decision-making going forward.”

The Working Families Party and Cynthia Nixon, among others, have accused Cuomo of wanting Senate Republicans to hold sway in that chamber.

“Why did he keep Senate Republicans in power,” said Bill Lipton, the director of the New York WFP, at the party's meeting endorsing Nixon. “To keep taxes low for his donors so he could continue to take in contributions from real estate and hedge fund millionaires and billionaires: $31 million to be exact.”

The governor’s campaign did not return a request for comment.