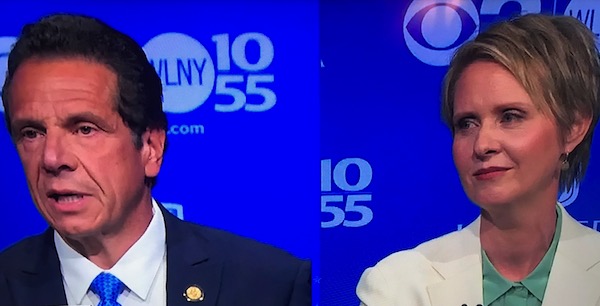 Cuomo and Nixon at the debate on CBS

Governor Andrew Cuomo, a two-term incumbent Democrat running for reelection, came face-to-face with his primary challenger, actor and education activist Cynthia Nixon, at the first and only scheduled debate of the race on Wednesday evening at Hofstra University on Long Island. The two Democrats exchanged acerbic attacks over the course of an hour, with no shortage of finger-wagging from the governor and eye-rolling from his insurgent opponent.

The debate, taking place just over two weeks from the September 13 vote, reflected much of the campaign rhetoric from recent weeks, with Nixon taking aim at what she sees as Cuomo’s lackluster commitment to progressive policies and the governor pivoting to paint himself as the incumbent with accomplishments who is also more qualified to take on President Donald Trump. The debate aired on CBS-2 and was moderated by anchor Maurice DuBois and  political reporter Marcia Kramer.

Nixon has sought to portray herself as an outsider to a broken culture and legislative process in Albany, depicting her lack of experience in government as an advantage, rather than a weakness. “Experience doesn’t mean that much if you’re not actually good at governing,” she said in an aside at Cuomo, while touting her background as a longtime advocate on issues that include education funding, LGBTQ, and women’s rights. Still, Nixon struggled to firmly answer the first question of the night from DuBois, which was, in part, to explain what has prepared her to be the chief executive of the state.

“The governor of New York is not a job about politics, it’s not about advocacy,” Cuomo said, while arguing that he is leading New York as the “first line of defense” against Trump. “It’s about doing, it’s about management.” Though many have speculated that Cuomo has been laying the foundation for a presidential bid himself, he also said for the record that he would serve as governor for the full four-year term if reelected. “The only caveat is if God strikes me dead,” he joked.

Nixon attempted, as she has on the campaign trail, to tie Cuomo’s record, and his apparent failures, to his wealthy donors. “When it comes to opposing Donald Trump in New York State, we already have a corrupt corporate Republican in the White House, we don’t need a corrupt, corporate Democrat in Albany as his main opposition,” she said, excoriating Cuomo for failing to give driver’s licenses to undocumented immigrants, refusing to push for a single-payer healthcare system, and failing to pass the Reproductive Health Act, the Climate and Community Protection Act, and the Liberty Act.

For his part, Cuomo repeatedly accused Nixon of making misleading claims, while calling her a “corporate donor” herself, an apparent reference to her setting up an S-corporation to file her taxes. “My opponent lives in the world of fiction. I live in the world of fact,” he said. While Nixon has indeed established an S-corporation, as she explained a common tactic for actors, she does not appear to have used it for political donations, instead making those personally, including to Mayor Bill de Blasio, whom Nixon supported vigorously in his initial 2013 mayoral run.

At several moments in the debate, especially in the early going, Nixon interjected as Cuomo spoke, sparking one particularly heated exchange. “Can you stop interrupting?” Cuomo said.

“Can you stop lying?” Nixon retorted.

“As soon as you do,” the governor replied.

There were sharp disagreements between the two on funding the MTA to repair the broken subway system, on implementing single-payer healthcare, and on allowing public sector union workers to strike.

Pushed on improving the city’s subways and whether he would consider delaying or cancelling an upcoming fare hike, Cuomo sought to displace the blame for the system’s troubles, saying as he has in the past that the city bears more responsibility than the state, despite the fact that the governor appoints a plurality of the MTA board and its top leadership. “I would support cancelling the fare hike because the service is not what people deserve. It has to be a joint funding responsibility between the city and the state,” he said, suggesting a 50-50 split on both covering a hypothetical cancellation of the long-planned fare hike and whatever portion of the $33 billion funding needs for the system that won’t be covered by tolls and fares.

Nixon said a fare hike would be “unconscionable” and said she would, as governor, have the state assume the estimated $325 million cost for it. “[The MTA] is a state agency and to pretend anything else is completely disingenuous,” she said of the authority, noting Cuomo’s penchant for diverting MTA funds for unrelated or unnecessary costs in the past. “[Cuomo] used the MTA like an ATM and we see the result,” she quipped.

Nixon also said the state, and the Democratic Party, should embrace a proposed single-payer health care proposal laid out by Democrats in the state Legislature and evaluated in the Rand Corporation study released a month ago. The plan could cost roughly $200 billion to implement in the short-term but would likely lead to long-term savings for both the state and taxpayers. “This is the kind of change that New Yorkers really care about, this is the kind of change that our Democratic Party should be embracing in order to address the incredible inequality here,” she said. “Healthcare is a human right.”

Though Cuomo agreed on that last point, he said single-payer ought to be implemented by the federal government rather than funded by the state budget, which is already roughly $170 billion. He said long-term it might save money but that it would be very expensive in the initial years.

Even in other areas, when they seemed to agree, Nixon took every opportunity to critique the governor’s seven-and-a-half years in office. On campaign finance reform, for instance, Cuomo reiterated his calls for ending the LLC loophole, banning outside income for legislators, and greater financial disclosure by lawmakers. He said those changes, which he has supported for years, could only happen with a Democratic majority in both houses of the state Legislature. As he has before, he also offered them as answers to corruption scandals that have hit his administration, without naming policies more closely in line with his economic development programs that were abused.

Nixon has advocated for similar reforms -- but has also refused corporate and LLC donations to her campaign -- and insisted that Cuomo is a flawed messenger having raised millions from LLCs for his own campaigns and for tolerating and empowering the Independent Democratic Conference, which shared power with Senate Republicans for seven years before disbanding in April. “To say he is disincentivized to close [the LLC] loophole would not begin to describe it strongly enough,” she said, also criticizing Cuomo’s 2014 closure of the Moreland Commission to Investigate Public Corruption, which he set up the previous year, as it looked at his donors and allies.

The two repeatedly bickered back and forth. Cuomo accused Nixon of being less than transparent herself, bringing up her failure to release her tax returns from the past several years until last Friday, when reporters were given three hours to peruse them in person. In response, Nixon noted that Cuomo did not release his own tax returns when he first ran for governor until after he was elected.

Responding to a moderator’s question, Nixon touted her support for the right of public union workers to strike. “We need to return to public sector workers every tool in the tool kit,” she said. Cuomo called it a “terrible idea” that could paralyze vital public systems such as schools, transit, and sanitation, and even cited de Blasio’s opposition to the idea.

Cuomo and Nixon did converge on the legalization of recreational marijuana, though Nixon views it as a racial and economic justice issue while Cuomo, until last year, called it a “gateway drug” and only recently changed his position -- something Nixon takes credit for, a theory Cuomo dismissed when she offered it again at the debate. He created a state taskforce in January to explore the issue, and it recommended a regulated, legalization program last month.

Perhaps the most alignment between the two candidates occurred when they were asked if either wanted de Blasio’s endorsement. Neither said they would accept or refuse it.

Cuomo, who has famously feuded with the mayor for years, said, in what could easily be taken for sarcasm, “I love Mayor de Blasio, I’m sure he loves me in a strange sort of way. After 30 years, we have a dysfunctional relationship. He makes his own political decisions, not me.”

Nixon, an ally of the two-term mayor who even sat on stage at both his inaugurations, said, “This is a race that I am running on my own. This does not have to do with any particular endorsement that I’ve gotten or haven’t gotten. But this has to do with the vision I’m enumerating for New York State, a vision of New York as a real progressive beacon, not just as a rhetorical progressive state the way we have now.”

The debate didn’t end with hostilities, however. Cuomo, who refused to even look his last primary opponent in the eye in public, walked over to Nixon who was still seated and the two shook hands, smiling.