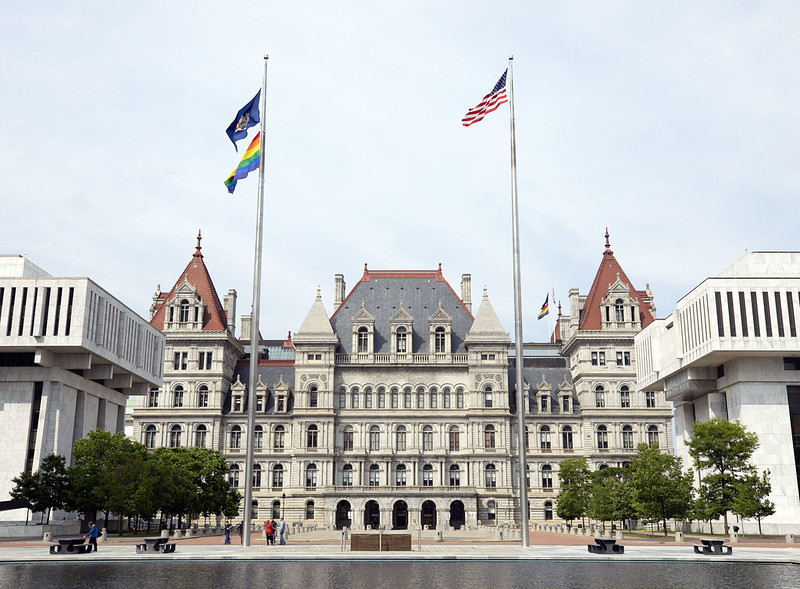 Big decisions to be made in the state capitol (photo: Mike Groll/Governor's Office)

A State Supreme Court judge in Niagara County struck down the state’s new campaign finance law which was based on the recommendations of a controversial state-created commission that took effect in December. The state Legislature could not give the commission the authority to make binding changes to state law, the judge ruled.

The New York State Public Financing Commission, established in the state budget last year, was a nine-member body made up of appointees of the governor and leaders of both major parties in the State Senate and Assembly. The commission was created as a compromise after the Legislature and Governor Andrew Cuomo could not come to agreement on a major campaign finance overhaul, including lower contribution limits and public matching funds for candidates, long-time demands of advocates and some elected officials who criticized the preponderance of wealthy donors and special interests in state elections.

The commission was tasked with formulating a new campaign finance system for state elections (similar to the system currently used in New York City) with a price tag of $100 million for a four-year election cycle. But seemingly at the behest of Cuomo, the commission also recommended changes to ballot petition requirements and party qualification thresholds, claiming that too many candidates of various parties on the ballot would bankrupt any new system and raising questions about how valid some of the state’s parties really are.

The commission recommendations became law in December after the Legislature took no action to amend or reject them.

A lawsuit against the commission led by the Working Families Party and joined by several rank-and-file members of the state Legislature, challenged the constitutionality of the law that created the state commission. A judge ruled in the WFP’s favor in a summary judgement handed down on Thursday.

Niagara County Supreme Court Justice Ralph Boniello ruled that “the Legislature, clearly and unequivocally, empowered the commission to legislate new law and repeal existing statutes. The line between administrative rule-making (which can be delegated) and legislative action (which cannot be delegated) has clearly been transgressed.”

Boniello wrote that creating new laws or repealing existing ones “is a function reserved solely to the Legislature under the Constitution.”

The judge also noted that though the statute that created the commission had a severability clause so that if one aspect was struck down, the rest would survive, “the Statute is an improper and unconstitutional delegation of legislative authority to the Commission.”

“This ruling is a victory for the voters of New York State,” said Sochie Nnaemeka, state director of the New York Working Families Party, in a statement. “We need more choices, not fewer, to build a strong democracy.” She added, “As we have consistently said and the courts confirmed today, an unelected commission has no right to interfere with New Yorkers’ constitutional right to fusion voting.”

Besides establishing lower contribution limits (though they remain relatively high) and creating a system to provide matching public funds for small-dollar campaign contributions to qualifying candidates, the commission had increased the number of petition signatures required for a statewide candidate to get on the ballot to 45,000 from 15,000.

Most controversially, it also increased the number of votes a political party needs to earn on its gubernatorial and presidential ballot lines in order to automatically qualify for a ballot line in subsequent elections within the same two-year period, from 50,000 votes every four years in a gubernatorial election to 130,000 votes or 2% of total votes cast, whichever is higher, every two years. Those moves seemed to be aimed at undermining New York’s smaller parties and the fusion voting system that keeps them alive. As a result, multiple lawsuits including the one by the WFP were filed against the commission, legislative leaders, and the governor (who was later dropped from the suit).

The Legislature could still choose to pass the struck down recommendations into law, though several elected officials and advocates have called for tweaks including reducing contribution limits further, quicker implementation, and placing the system under a new administrative body that is completely separate from the state Board of Elections. And there are many calls to also do away with the ballot status requirements in the event of a new system moving forward.

Jessica Wisneski, co-executive director of Citizen Action of New York, called on the Legislature to enact a small-donor public matching funds program through the regular legislative process. “New Yorkers have demanded action for years to reduce the influence of hedge fund billionaires, luxury real estate developers and the charter school industry,” she said in a statement. “We need immediate solutions that put power in the hands of those without the resources to write thousand-dollar campaign checks.”

The Brennan Center for Justice at NYU Law urged the governor and legislative leaders to avoid using the legal ruling as an excuse to let publicly financed elections wither on the vine. “Albany can’t use today’s court ruling as an excuse to derail a public financing program that was promised to New Yorkers,” said Lawrence Norden, director of the Election Reform Program at the Brennan Center, in a statement.

Norden noted that the commission crafted its law after hearing months of testimony from campaign finance experts and members of the public who agreed on the need to reduce the influence of money in elections. “For decades, Albany’s wealthiest donors have drowned out everyone else. By following through on their promise of public financing, the governor and lawmakers can give more New Yorkers a say in the decisions that shape their lives,” he said.

The commission’s recommendations made for odd bedfellows. The Conservative Party lies on the opposite end of the political spectrum from the WFP but nonetheless the two were allies when it came to opposing the new party thresholds. The Conservative Party had filed a separate lawsuit against the commission, mirroring the WFP’s. New York Conservative Party Chair Gerard Kassar called Thursday’s judgement a “total victory for political freedom in New York, and a reminder to Governor Cuomo that he is an executive and not an emperor. Reason has won out over Machiavellism, and New York is better for it.”