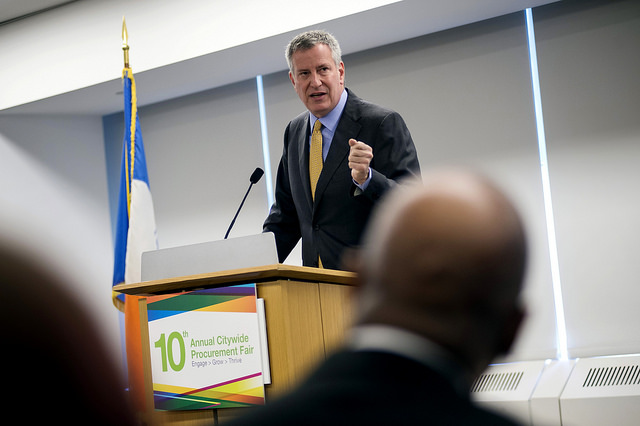 Two weeks ago, Mayor Bill de Blasio and his government legal counsel, Maya Wiley, declared that a new classification had been granted to five outside advisers of the mayor, shielding communication between de Blasio and those advisers - three of whom represent clients with city business - from certain public disclosure requirements. In doing so, de Blasio provoked heightened scrutiny, even some ridicule, of his relationships with these “agents of the city,” as Wiley called them, including the question of whether they should be subject to the same conflict of interest and financial disclosures required of top city officials.

Facing media inquiries about blocking access to communications with one of those close political advisers, the mayor’s legal team presented a tenuous, novel defense. The city had designated five individuals who work outside city government but regularly advise the mayor as “agents of the city” and declared certain communications between the mayor and those individuals exempt from transparency through the state’s Freedom of Information Law (FOIL).

The revelation and ensuing public controversy over the new classification were prompted by the denial of an initial FOIL request, made by NY1 for emails exchanged between the mayor and Jonathan Rosen of BerlinRosen, a consulting firm, and follow up questions about the justification behind it. Wiley, the mayor’s top government lawyer, explained that the request for those communications had been rejected on the premise that Rosen was acting as an “agent of the city” and explained that the protection extended to four others: Nicholas Baldick and Bill Hyers of Hilltop Public Solutions, another consulting firm; John Del Cecato from AKPD Message and Media; and U.S. Ambassador to South Africa Patrick Gaspard. Rosen and Gaspard are longtime friends of the mayor. Hyers, Baldick, Del Cecato, and Rosen were instrumental in de Blasio’s 2013 election - other than Del Cecato, they also represent clients with city business.

Likely intended as something of a throw-away phrase of legalese, the “agents of the city” moniker used by Wiley stuck and put the mayor further on the defensive. “It’s a fictitious phrase,” said Robert Freeman, executive director of the State Committee on Open Government and FOIL expert. “It’s an attempt to stretch an exception beyond what the Freedom of Information law, in my opinion, permits.” Freeman believes the mayor is outright wrong in his contention and that the exemption from FOIL only applies for consultants who have been “retained” by the city.

The five advisers are unpaid, volunteer consultants, not city employees. While they are not officially affiliated with the administration, they have a very public history with the mayor and his political career. “I think it’s appropriate I call them advisers,” de Blasio said, avoiding the “agents of the city” moniker when pressed by Brian Lehrer on WNYC last week, “I think that’s the right phrase.”

De Blasio has repeatedly said that these advisers do not discuss their clients with him and that if they did, the conversations would be disclosed as lobbying. What he is shielding from FOIL is the informal advice they give him, he says, asserting that “these are folks who are advisers, and in some cases advisers for decades.” There are questions not only about the legal validity of this claim, but also about whether these advisers should provide a full public accounting of their conflicts and finances, as deputy mayors, agency heads, and others must.

“The state’s highest court has held that exceptions to the right to access must be construed narrowly in order to foster public access,” Freeman added. “The mayor’s interpretation is exactly the reverse.”

The administration hasn’t explained the legal underpinnings for the exemptions in this case.

Multiple requests for clarification and further comment sent to the administration went unanswered. But, if the mayor can claim these exemptions using in-house legal determination that treats these individuals as de facto employees of the city, it stands to reason that their status extends to other obligations required of officials in the administration.

“By creating this special designation for unofficial advisers whose opinion carry weight, they’ve opened up a can of worms that prompts some very necessary questions,” said Dick Dadey, executive director of Citizens Union, a government reform group.

“They cannot be protected by being called “agents of the city” without bearing the responsibility to comply fully with the ethics laws governing senior employees and not also be required to file financial disclosure forms,” Dadey said.

As Dadey pointed out, there are a number of legal provisions at play. There is FOIL, which states which agency records are subject to disclosure and which are exempt. There is the Public Officers Law, within which FOIL is contained, which regulates the business and professional activities of state employees and officers of city agencies. There is the City Charter’s Conflicts of Interest section, which lays out the different rules and regulations that public servants are required to abide by and the responsibilities of the Conflicts of Interest Board. And, there is the city’s Administrative Code, which establishes financial disclosure rules for various categories of employees and public officials.

There is no specific statute in FOIL that applies to unpaid consultants. To claim an exemption from disclosing communications, as the mayor can with employees of the administration, they must necessarily fall under a city agency, presumably the Mayor’s Office in this case. FOIL defines agency as “any state or municipal department, board, bureau, division, commission, committee, public authority, public corporation, council, office or other governmental entity performing a governmental or proprietary function for the state or any one or more municipalities thereof, except the judiciary or the state legislature.”

FOIL lays out a number of instances where the city can deny access to records, including avoiding an invasion of privacy; protecting trade secrets; protecting the integrity of contract negotiations and awards; preventing interference in law enforcement procedures and investigations; ensuring information security; and in the case of “inter-agency or intra-agency materials” that aren’t statistical data, instructions to staff that affect the public, final policy determinations, and external audits.

The last category seems the most likely one applicable to the mayor’s consultations with the five outside advisers.

By virtue of claiming such an exemption to FOIL, de Blasio is implicitly treating these advisers as employees of the city. And if they are considered employees for the sake of FOIL exemptions, then they may be considered employees under the Administrative Code Section 12-110 that deals with annual financial disclosure for local party officials, candidates for public office, and various city employees.

Information that is required to be disclosed includes name of employer; marital status; spouse’s information; offices held by individual and spouse (trusteeship, directorship, partnership and even honorary positions); information on any additional business, trade or occupation; membership of political organizations; details of agreements and contracts; nature and amount of income above $1,000; reimbursements for expenditure; value of gifts received; assets and property owned; details of creditors, among other requirements.

The disclosure requirements generally apply to employees in a significant “policymaking position” and being a direct adviser to the mayor seems to fit that description. If de Blasio’s advisers were to fill out these disclosure forms, their clients and income would be public information, making completely evident their business before the city.

If the mayor were to contend that these individuals are not eligible for disclosure under the conflicts of interest law, it would logically follow that he cannot claim the exemption under FOIL either.

Last week, Common Cause New York, a good government group, called on COIB to review the emails in question between the mayor and these “agents” of the city, citing their concerns that these consultants may be lobbying the mayor or using insider information to benefit their clients.

“The proliferation of the city's shadow government remains a matter of public interest, especially given this protected class of individuals who operate without oversight or accountability,” said Susan Lerner, executive director of Common Cause New York, in a statement. “Common Cause New York believes that this vague category demands explanation, and that the COIB has an obligation to review the emails withheld.”

The mayor has always maintained that the consultants do not discuss their clients with him. “[I]f any of them were ever to attempt to talk about a business matter related to a client – first of all, I wouldn’t allow it,” de Blasio said on WNYC. “Second of all, that would be something – of course that is discloseable – but what I’ve said from the beginning is they don’t talk to me about their clients and business matters with clients, they just don’t.”

At a recent unrelated press conference, Gotham Gazette asked the mayor if the public should not be allowed some insights into the conversations he is having with what he described as “a kitchen cabinet” like other mayors have had, even if portions of the discussions were redacted, as emails obtained through FOIL often are. “I understand the question,” de Blasio said, “but I believe that their role as advisers was appropriate, and the way it’s being handled based on legal guidance is appropriate.”

Note: this article has been corrected to reflect that John Del Cecato does not represent clients with city business.