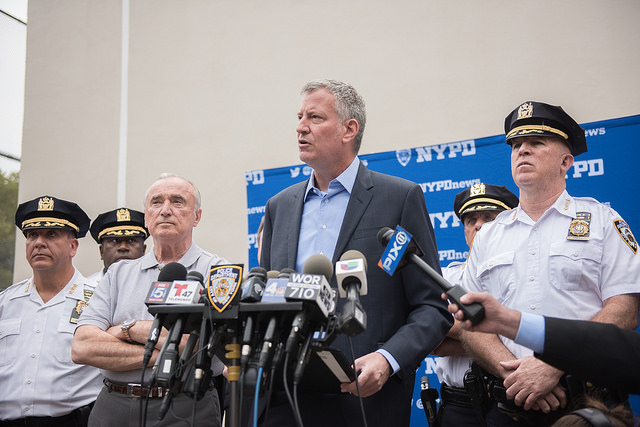 This September was the safest September in the more than two decades that the NYPD has been keeping statistics of the seven major felonies through its CompStat system.

The press conference came one week after the first Presidential debate between Republican Donald Trump and Democrat Hillary Clinton, during which public safety in New York City, de Blasio’s record on crime, and the controversial policing practice of stop-and-frisk were focal points.

While Trump’s assertions about the value of stop-and-frisk were largely debunked by real-time fact-checking and news accounts since, his claim about murder being up under de Blasio is also wrong, but has some background in truth. In 2015, murders increased in New York City from the record low of 2014, which was de Blasio’s first year in office. The murder rate is currently down in 2016 from its 2015 pace, however, which - alongside de Blasio’s full record as mayor - led Clinton to assert correctly that murder is not in fact rising under de Blasio.

Crime stats press conferences led by the mayor at 1 Police Plaza have been a monthly ritual as city officials have had more and more good news about safety in the city, especially in long-term trends and this year compared to last. While there are slight increases this year over last in reported rapes and felony assaults, there have been decreases this year in murder, shootings, robbery, burglary, and car theft.

“I’ll note that there are cities in this country – and I say this with sorrow – there are cities in this country that are experiencing increasing crime,” de Blasio said on Monday. “We’re very pleased to be in a city where crime continues to go down through innovative strategies, through exceptional effort by the men and women of the NYPD,” the mayor said, continuing on to explain that not only was this the safest September on record, but that for 2016 thus far, “overall index crimes [are] down 3 percent, murders down 3.7 percent, shootings down 10.9 percent” compared to the first nine months of last year.

In part, this year’s statistics look good because there were slight upticks in some categories last year.

In the discussion about murder in New York City, we again see how tricky crime statistics can be, even if you try to take a “just the facts” approach, as the NYPD often boasts. Commenters of all perspectives can often find some piece of data that suits their preconceptions or fits the argument they want to make. But, because of the statistical evidence from de Blasio’s first 33 months as mayor, it is difficult to argue that crime is on the rise under his leadership.

At this juncture in his mayoralty, we can gain some clarity by looking at the longer term trends, including by comparing the first 33 months of de Blasio’s mayoralty to the final years of Mayor Michael Bloomberg’s tenure. By taking the averages of de Blasio’s 33 months and comparing them to the averages of the final three years (36 months) under Bloomberg, more valid conclusions can be drawn than by only sticking with year-over-year or month-over-month comparisons.

Under de Blasio, there have been 28 murders per month. For Bloomberg’s final three years in office, there were 35 murders per month. In the larger context of the seven major felonies, or index crimes, under de Blasio there have been 8,675 per month; for 2011, 2012, and 2013 under Bloomberg, there were 9,143 per month. (These numbers can be extrapolated to yearly averages by multiplying by 12, of course; and in three months we’ll have the full data for de Blasio’s first three years.)

Otherwise, some categories show lower monthly averages under de Blasio than the final three years under Bloomberg (robbery, burglary, car theft) and some the opposite (felony assault and grand larceny have risen).

The long-term trend - under several mayors in a row - is down: major crimes have been decreasing in New York City over decades. Within that larger trend, there have been upticks certain years in certain categories. But, major felonies have been decreasing overall, and for the most part that continues to be true under Mayor de Blasio.