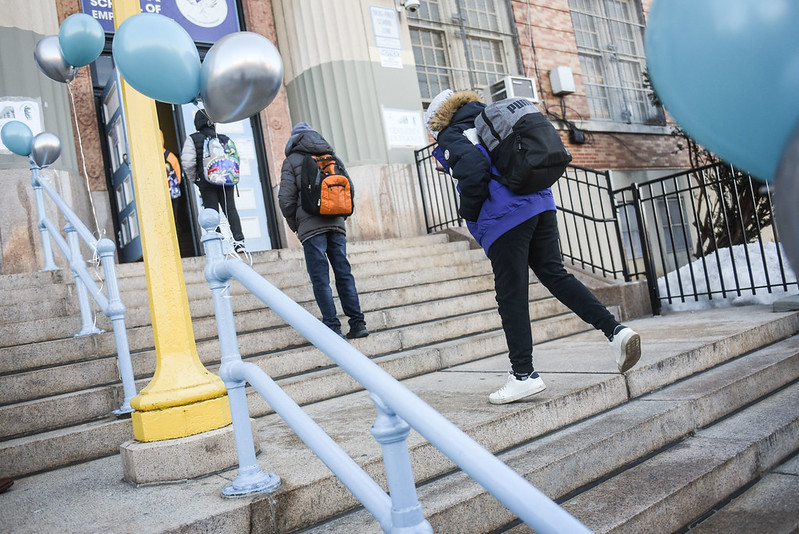 On Thursday morning, February 25, thousands of New York's middle school students scrambled for misplaced backpacks and student MetroCards, trundled out the door, and made their way to long-abandoned classrooms, ready at last to resume in-person instruction after months of remote learning. Thousands of teachers were there to greet them—many no doubt wearing nervous but enthusiastic grins behind their doubled-up facemasks.

Sadly, my daughter Karina—a seventh-grader at Brooklyn's MS 88—wasn’t among them. That's not to say she's not eager to return. Like so many of her fellow students, Karina has struggled with remote learning. Like many parents, I've struggled along with her. We are badly bruised from this fight.

But much as our family has longed for a return to normalcy, we've been down this road before. Last fall, Mayor Bill de Blasio announced that schools would be reopening on Sept. 10, then the 21st, then the 29th. (Middle schoolers, who were offered a hybrid system, returned on Oct. 1.) The experiment lasted less than two months, at which point a positivity rate of more than 3 percent prompted another citywide shutdown.
Then came yet another about-face, as de Blasio abandoned the 3 percent threshold altogether. After all, the argument went, if restaurants are open, why aren't schools? Of course, that left unexamined the questionable decision to restore restaurant dining at all, given the surge in the virus. Are such judgments being driven by science, by economic pressures, or by the perpetual pissing match between Mayor de Blasio and Gov. Andrew Cuomo? No one knows for sure. What is certain, however, is that the funding necessary to allow schools to implement life-saving measures (upgraded ventilation systems; consistent, methodological and science-based testing of students and school workers; appropriate staffing of school nurses and counselors to deal with both illness and grief; and more) never materialized.

Unable to trust our elected officials, we did what seemingly every other family is doing: we read up on the latest research, talked to many friends and parents in the neighborhood, and gamed out the pros and cons for ourselves. We considered the recent CDC guidance suggesting schools could be made safe, along with the welcome decline in positivity rates. We weighed the pitfalls of remote learning (unreliable technology, Zoom fatigue, and Karina's wildly erratic grades and growing disinterest in school) against the risks posed by new strains of the virus and chaotic decision-making by elected officials.

We talked to our girls about how they felt about returning, both expressed ambivalence appropriate for their age, but also real concern about safety and a recognition that there are not enough resources for everyone. They know there are other kids and families that absolutely need in-person learning and we should focus our limited resources on making sure they are all safe. Having lost four of our family members to the virus — two in nursing homes, and two in their houses — we know thousands of other students and educators are also still navigating unprocessed grief and trauma. Given all this, we decided against sending them back to school. We opted to play it safe.

That said, as a former PTA president and member of MS 88's school leadership team, I'm well aware that not every family has the privilege to make this decision. I recently spoke to one Red Hook mom whose five children are all learning remotely, or trying to. Due to the lack of other child care options, this mom had been unable to work for months, with the expected impact on the family finances. Meanwhile, she's had to step in as impromptu technician, substitute teacher, lunch lady, and child therapist for her kids, two of whom — both with special needs — recently received "promotion in doubt" letters indicating they may be held back. It’s been agonizing to watch how frustrating remote learning has been for the kids and how far behind they have fallen. No one seems to be seriously concerned about their socio-emotional needs. For this mom, a return to classroom learning can't come soon enough, but she still views the plan as incoherent and fears for her children’s safety.

The decision is no less agonizing for teachers. Despite the outrage they have faced from frustrated parents and politicians — who often seem more interested in demonizing teachers' unions than vaccinating their members — most want to be in the classroom. But they don't want to risk their lives, or the lives of their loved ones or neighbors to do it. And many know all too well that the same lack of funding that has for years forced them to pay out of their 0wn pockets for much-needed supplies is making it impossible for administrators to keep classrooms safe. After all, hundreds of city schools have already been forced to close due to covid cases — hardly a reassuring sign.

The battles breaking out between families and teachers around the country — often in wealthier school districts — are heartbreaking, particularly when you consider the children stuck in the middle, watching in bewilderment as adults engage in a schoolyard brawl.

Instead of blaming one another for a global tragedy that none of us asked for, I'd like to see us work together to examine how the system itself has failed and to fix it. At the heart of that failure is something we all understand: money. The decades-long underfunding of our school system has always represented a crisis for residents of certain zip codes, but it was a crisis that New Yorkers of means willfully overlooked. The pandemic spread the pain around. It exposed a system held together with Elmer's glue and popsicle sticks, along with the heroic efforts of dedicated teachers, administrators, parents and kids, who do their best every day to make it work, whatever happens in Albany and in City Hall.

According to the Alliance for Quality Education, even before the pandemic swept through the state, New York was ranked 49th in the nation in terms of educational equity. The organization further notes that “8 out of 10 Black and Latinx students attend a school that has been systematically underfunded by the state.” Meanwhile, police and prisons are showered with resources, prompting tens of thousands of New Yorkers to take to the streets to demand change.

The pandemic highlighted the dire consequences of this neglect. But if you thought the crisis would be an opportunity for our elected officials to address the situation, for instance by increasing taxes on the wealthiest New Yorkers, you may be disappointed. In fact, the opposite is happening. Last year, when the federal government sent the state more than $700 million in relief funds to help schools absorb costs related to the pandemic, Gov. Cuomo actually shifted the same amount of money out of the state education budget. Worse, according to an analysis by Chalkbeat and the American Institutes for Research, such fiscal shenanigans left schools in high-poverty areas shouldering more of the burden. Overall, New York City's schools received $200 less per student, even with the federal help, than they would have under the approved state budget, a disappointing violation of Cuomo's bold pledge to finally "close the education gap." His recently released budget proposal for fiscal year 2022 pulls similar tricks, advancing several bait-and switch proposals that will cut an estimated $600 million more from what New York City public schools should have expected. We have every reason to believe the governor will continue to use federal funds earmarked for pandemic-related education expenses to close a budget shortfall.

The equity gap may well widen further as the state seeks to respond to its fiscal deficits not by asking the wealthy to finally shoulder their share of the burden—heaven forbid—but by instituting an austerity budget that will further gut our school system, punish school workers and short-change our kids. Meanwhile, the governor has been granted sweeping new power to make further cuts unilaterally (though the emergency authority may be revoked in light of the ongoing nursing-home scandal). Further cuts may well fall on both rich and poor districts. But as we learned following the 2008 economic meltdown, wealthier districts can always make up the difference by hiking property taxes, an option that's simply not feasible for New York City’s public school system, especially in high-poverty areas.

In the end, whether a given family opts for in-person instruction or sticks with remote learning is beside the point. For too many students, 2020 will go down as a lost year, not because their parents made the wrong choice or because teachers' unions sought to rightfully protect their members, but because New York once again balanced its budget on the backs of working people and let the wealthy off the hook. The problem, as any good teacher could tell you — whether on a screen or in person — comes down to basic arithmetic.

***
Alexa Avilés, a mother and organizer in Sunset Park, Brooklyn, is a candidate for the New York City Council in District 38. On Twitter @AlexaForCouncil.