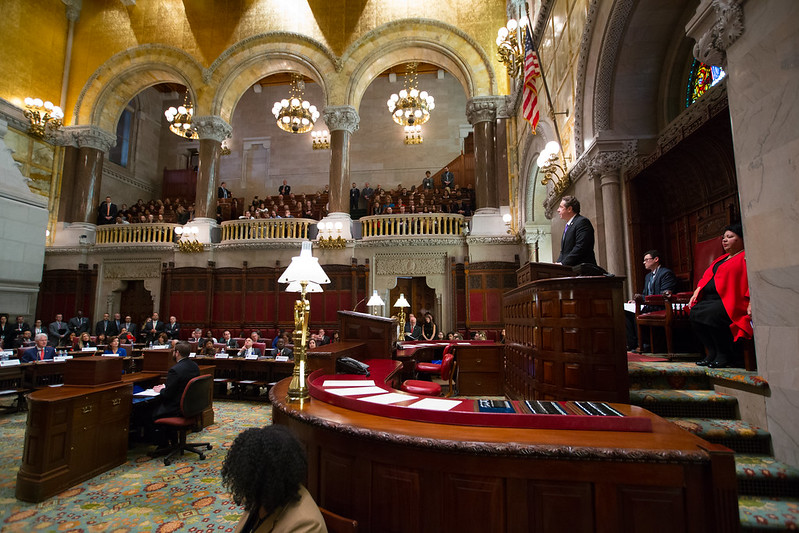 The Census Bureau released its population counts for the nation and the states on April 26, including changes for the states in the apportionment of 435 seats in the United States House of Representatives. New York State will drop one House seat, going from 27 seats to 26, even though it actually gained more than 800,000 people, from 19.4 to 20.2 million, since 2010. Extraordinarily, the Census reported that New York would have held its 27th seat if  89 more persons had been counted.

The changes come at a time when the Democratic majority in the House is deeply threatened. Historically, the party in power (this time, the Democrats) loses seats in the midterms, the congressional elections halfway through a president’s term. This is a fact Democratic President Joe Biden is surely keenly aware of given his long political history in the U.S. Senate and as Vice President.

The Republicans have more power over drawing new state district maps than the Democrats do because they have more “trifectas,” where one party controls both houses of the state legislature and the governor’s office. The Republicans now have 23 states with trifectas compared to 15 for the Democrats, including New York. These national Republican advantages mean the outcome of redistricting in New York could be vital to the Democrats holding the House of Representatives. Democrats now dominate both Houses of the New York State Legislature and have the power to eliminate a number of Republican House seats, despite the existence of an Independent Districting Commission created to make redistricting fair to both political parties.

The apportionment changes across the country were less dramatic than anticipated, although the shift in the allocation of House seats continued to the South and the West. New York and a handful of other states will lose one seat each. Texas will gain two, and Florida, Georgia, North Carolina, Montana, Colorado, and Oregon gain one each. The apportionment changes, however, are just a prelude to the national power struggle over redistricting. The 2022 midterm elections for control of the House of Representatives will take place on the new district lines drawn by the states.

Some states have set up nonpartisan commissions to achieve fair districts; in some states one political party has a trifecta and has only the exercise of self-restraint to curb ruthless partisan gerrymandering. In other states, divided government, where there’s some political split within the two houses of the legislature and governor’s office, can result in political compromises in the drawing of the lines. Virtually every districting plan ends up challenged in the courts, whose decisions can sometimes, but not always, act as a final restraint on partisanship.

Partisan gerrymandering of legislative districts is virtually synonymous with redistricting itself, and is well known to the general public. Gerrymandering has been a political fact of life since the early 19th century and includes state and local districts as well as the House of Representatives. Both parties historically have gerrymandered where they had the power to do so, but the 1960s produced some restraints on the process, like the Voting Rights Act and the one-person, one-vote 1964 decision of the United States Supreme Court.

New York State has been no stranger to partisan gerrymandering, but there was a division of power in the state for decades, with Republicans in control of the State Senate and Democrats in control of the State Assembly. The division of power forced compromises on the House seats, but for the state legislative districts in the Assembly and the Senate the party in power controlled the process. Voting Rights Act and one-person, one-vote protections, as well as court challenges, continued to force modest restraints on partisanship, and elections always produced unique results. In my 32 years in the State Legislature, I went through three redistrictings, in 1992, 2002, and 2012. They were never fun, even for a Democratic incumbent Assembly member from Brooklyn.

Demands for greater fairness in the process finally produced a constitutional amendment in New York creating an independent redistricting commission in 2014. I voted for the legislation that put the constitutional amendment on the ballot after the 2012 redistricting of the House seats and legislative districts. The Republican Party still controlled the State Senate in 2012 and 2014 but the Democrats were becoming ever more competitive. The Democrats in the State Senate gained an outright majority against the Republicans in 2016, gained more seats in 2018, and in 2020 won 43 out of the 63 seats in the Senate, or more than two-thirds of that body. Democrats in the State Assembly have had two-thirds majorities for decades, primarily because nearly every single one of the 65 Assembly districts in New York City is represented by a Democrat.

In the past decade, the United States Supreme Court, in two major decisions, undermined the fight for fair processes in redistricting, despite the creation of a number of independent districting commissions in the states. In 2013, in Shelby County v. Holder, the U.S. Supreme Court threw out the preclearance of district maps of the states by the Justice Department under Section V of the Voting Rights Act, claiming Section V was no longer necessary. In 2019. the U.S. Supreme Court, in Rucho v. Common Cause, halted the efforts to reform partisan gerrymandering in the federal courts, saying gerrymandering was ultimately a political question over which the federal courts did not have authority.

The Supreme Court decisions have now left the door wide open for ruthless racial and partisan gerrymandering over House districts, especially in the southern states like Texas, Florida, Georgia, and North Carolina (the Democratic Governor in North Carolina has no role in redistricting there), which the Republicans control and where there is no longer preclearance by the Justice Department to halt racist gerrymanders.

Dave Wasserman, a political analyst for the Cook Political Report and one of the nation’s foremost experts on redistricting, has examined the state of redistricting across the nation. His analysis presents the current status as follows for the 435 House seats across the country: 187 seats with districting controlled by Republicans, 75 controlled by Democrats, 121 under independent/bipartisan districting commissions, 46 seats under divided party control, and 6 at-large seats. In some states, however, like Florida, the Republican Party is likely to aggressively draw new lines to eliminate Democratic incumbents and shore up newly-elected Republicans from South Florida. As many as 3 Democratic House seats are at risk there.

There are likely to be aggressive efforts to draw the district lines where one party or the other controls the process, but the fact remains that the Republican Party is in control of more states than the Democratic Party. The Republicans, just through redistricting alone, are capable of eliminating enough Democratic seats across the country on a net basis to offset the current 222-213, thin, five-seat majority the Democrats have in the House, making it ever more challenging to hold House seats for the Democrats in the midterm elections. In addition to New York, other important states like California, Ohio, Virginia, and Michigan have districting commissions that could neutralize partisanship. But even in those states the outcome is far from certain.

At the national level, there is still a chance that Congress could put the brakes on partisan or racial gerrymandering. H.R. 1, which has been passed in the House, requires non-partisan districting commissions for Congressional districts, and uniform standards for fair districting, like geographic compactness and communities of interest. H.R. 4, the John Lewis Voting Rights Advancement Act, would restore Section 5 of the Voting Rights Act and re-establish Justice Department preclearance of district lines. A version of H.R. 4 passed in 2019. These bills, advanced by Democrats, proffer a truce on redistricting to the Republicans, a chance to avoid an all-out war over district lines. The demographic data and individual population counts for each district, information essential for the lines to be drawn, won’t be released until August. The redistricting will then begin in earnest. There is still time to negotiate, but in my opinion Republican acceptance of reforms is unlikely.

Democrats currently have a 19-8 majority in the New York House delegation, and the state must lose one seat.

Compliance with certain standards in New York’s law on redistricting, such as compactness and communities of interest, must be adhered to regardless of whether the commission or the Legislature draws the district lines in New York. Every Congressional district must have about 760,000 people, and it is not yet known how many persons are within each district or what their minority populations are, but House Speaker Nancy Pelosi, among many others, is probably vitally interested in what the final lines will look like in New York.

Wasserman, in a set of New York maps put out on his twitter account, depicted New York’s current lines and envisioned a districting alternative that eliminates five Republican districts. New York goes from a 19-8 Democratic majority to 23-3. See below for more. 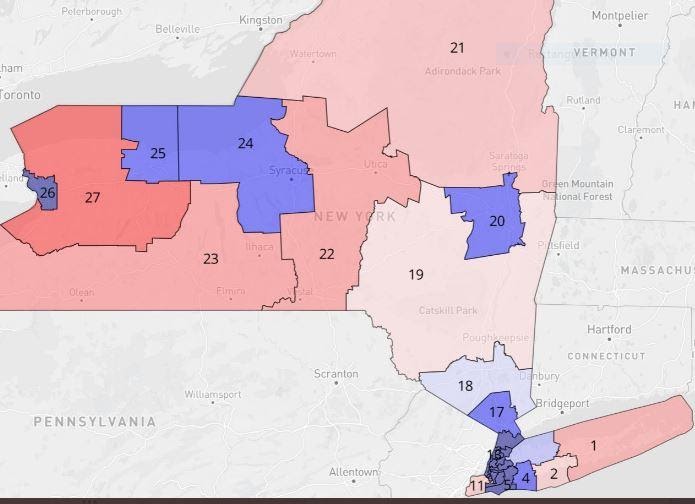 New York’s Republican House districts are 1, 2, 11, 21, 22, 23, 24, and 27.  Republican Congressional Reps. Lee Zeldin from the 1st C.D. just launched a campaign for Governor in the 2022 election and Tom Reed from the 23rd announced he is retiring, meaning two Republican-held seats are likely to be vacant.

Here is Wasserman’s concept for a redistricting in New York that goes to 26 seats and has a 23-3 template for Democratic wins: 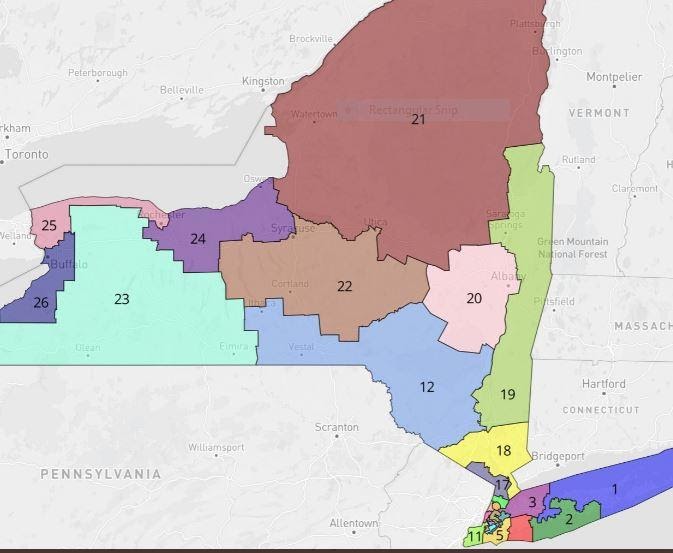 The above map is just a concept. But the Democrats have enough flexibility shifting Democrats around to take all three of the Republican seats downstate (two on Long Island and the Staten Island-Brooklyn seat), and convert them into winning districts for Democrats. That would leave three Republican seats in Upstate New York instead of five.

Partisan maps don’t guarantee victories in elections. No one knows what the overall national tone will be like in the fall of 2022. Will Biden stay popular? Will there be a conservative counter-reaction to Democratic spending, leading to a Republican wave like the Tea Party in 2010? Will Democrats in New York (and elsewhere) go to sleep and fail to come out to vote? The answers to these questions are unknown. But I think if the legislative leaders in New York offered Nancy Pelosi an elimination of five Republican seats I know what her answer would be.