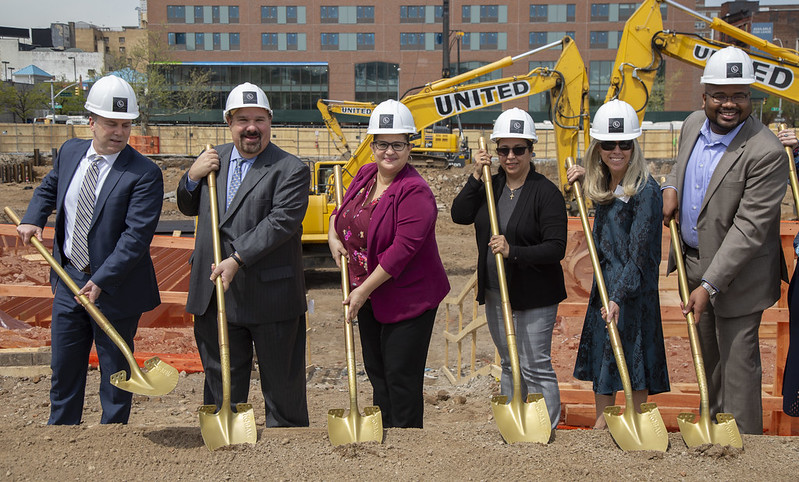 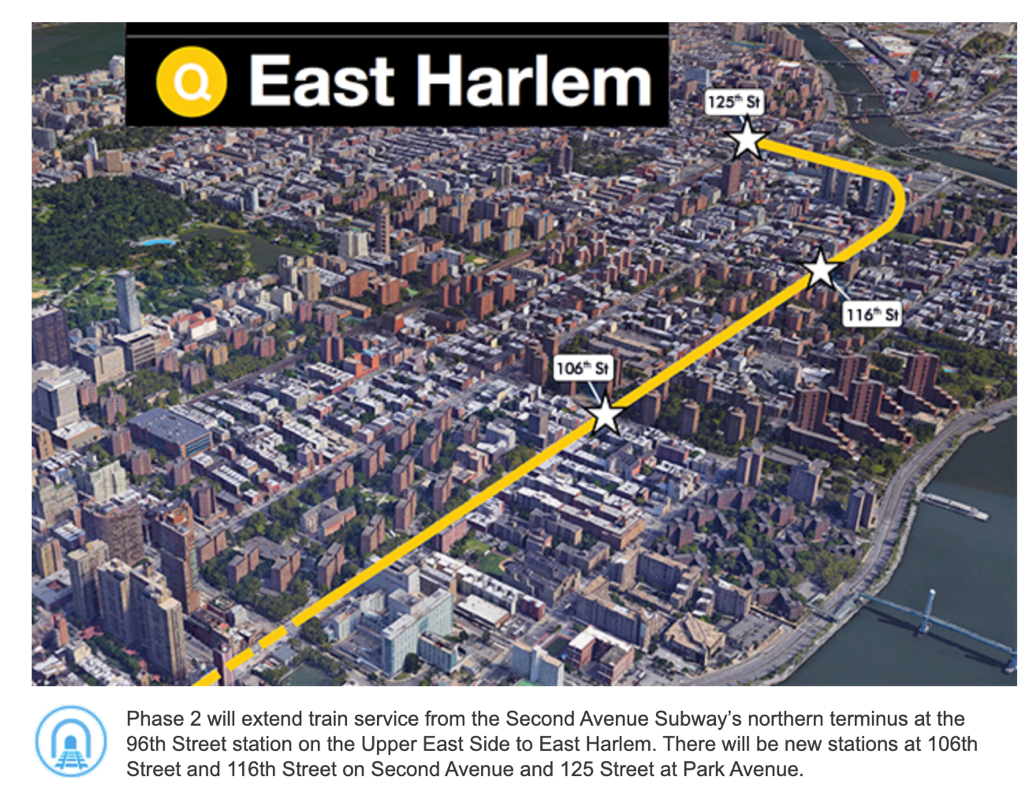 Plans are advancing rapidly for the 1.5 mile Second Avenue (Q) Subway from 96th to 125th  Streets. The estimated cost of the segment’s three new stops (106th, 116th, and 125th streets) is about $6 billion, with the likelihood of an even higher price tag by the planned opening date of 2029. The project has strong support from city, state, and federal officials and will benefit from the federal Infrastructure Investment and Jobs Act (2021).

The Second Avenue Subway three-stop extension will likely become the nation’s most expensive urban mass transit project. Still, it will fail to benefit many city residents unless significant zoning changes are made to the neighborhood.

MTA capital planners estimate that the East Harlem extension would, at best, add “an additional 100,000 daily riders.” Moreover, many of these subway riders are likely to be East Harlem residents shifting from the existing Lexington Avenue Subway (4/5/6) to the more convenient Second Avenue extension further east. These ridership projections are underwhelming in the context of a subway system back to carrying over 3 million riders a day on most weekdays.

High-quality planning and significant upzoning could boost ridership on the new line and remake East Harlem into a place that more comfortably accommodates current and future residents–of all income levels. The New York City Department of City Planning, the MTA and its New York City Transit division, and NYCHA need to plan proactively and “think big” for the neighborhood’s future.

Density Is the Solution, Not the Problem

(R8 zoning on the left and R10 zoning on the right. These high-density zoning designations, and contextual variations (R8A, R8B, R10A, etc.), animate the Upper East Side below 96th street. See NYC Planning for full descriptions.)

The first phase of the Second Avenue line (with stops at 72nd, 86th, and 96th Streets) serves the Upper East Side. This affluent district is characterized by large apartment buildings permitted primarily by R8 and R10 zoning. Major institutions like Hunter College and hospital complexes attract thousands of daily subway commuters. The first stops of the Q Line quickly attracted about 200,000 riders per day, and patronage is rebounding amid pandemic recovery.

This strong ridership was predictable. Upscale, high-density redevelopment of the East Side tenements has been a civic priority since the 1940s. Big, bulky apartment buildings are often frowned upon in NIMBY circles, but the vitality of the Upper East Side demonstrates the value of concentrating hundreds of thousands of people together in suitable housing near transit. The apartment buildings frequently have stores at the base and wide sidewalks. Many remaining tenement buildings have been renovated for higher-income renters. Population density of this type is one of New York’s enduring assets–and a key to its rebounding fortunes in the post-covid era.

Extending the subway line in East Harlem along Second Avenue between 96th Street and 125th Streets is a different story. The neighborhood's threadbare low-rise tenements remain a dominant feature. Developers, due to redlining, ignored the area for decades. Overcrowded apartments, rent-burdened families, and building code violations in the area are well documented. The longstanding Puerto Rican and Black communities in the area have thrived despite widespread housing exploitation and poor living conditions. 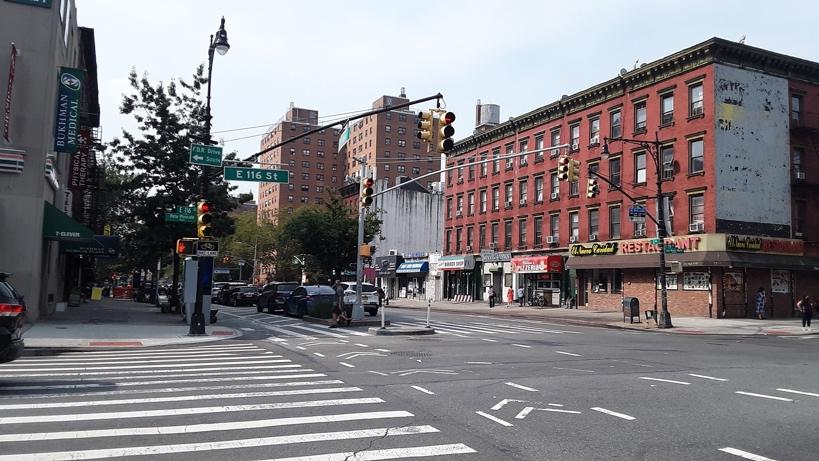 The city and NYCHA redeveloped sections of the district since the 1940s, but these efforts have lost their luster. East Harlem retains one of the nation’s largest concentrations of “tower in the park” public housing. The iconic red-brick towers, built far below the allowable zoning envelope, were once a showpiece of the city’s social vision. Today, however, growing maintenance issues, because of limited capital and operating subsidies, have undermined resident quality of life.

Despite their Manhattan location and the Lexington Subway line running nearby, planners built the NYCHA housing projects at low-density levels with acres of lawn and surface parking. The local stations through which the current Lexington Subway runs (103rd, 110th, and 116th Streets) have modest ridership compared to stations below 96th Street. Very few NYCHA developments have stores at ground level, creating empty zones along major Avenues. 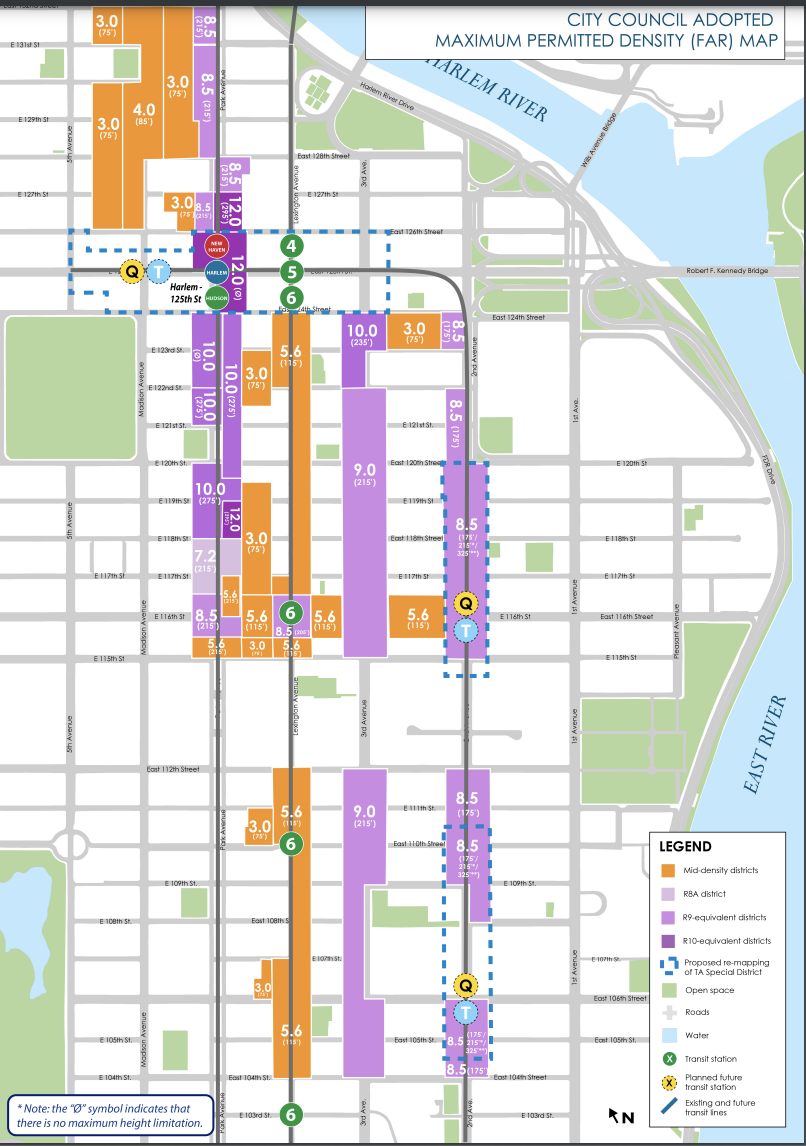 The East Harlem rezoning approved in 2017 did what it could, given anti-density politics, to consider the future impact of the Second Avenue Subway. But most of the neighborhood remained R7, and only a few narrow corridors along major avenues were rezoned to R9 and higher density commercial.

The expectations in East Harlem for new housing in the rezoned corridors  is about 3,500 units, only some of which would be affordable under the MIH (Mandatory Inclusionary Zoning) requirements. These new apartments will not compensate for subway-related gentrification or drive much new ridership. Most new housing in the neighborhood outside the rezoned areas will probably be “as-of-right” market housing, taking advantage of the new subway stops, with few options for low-income tenants. 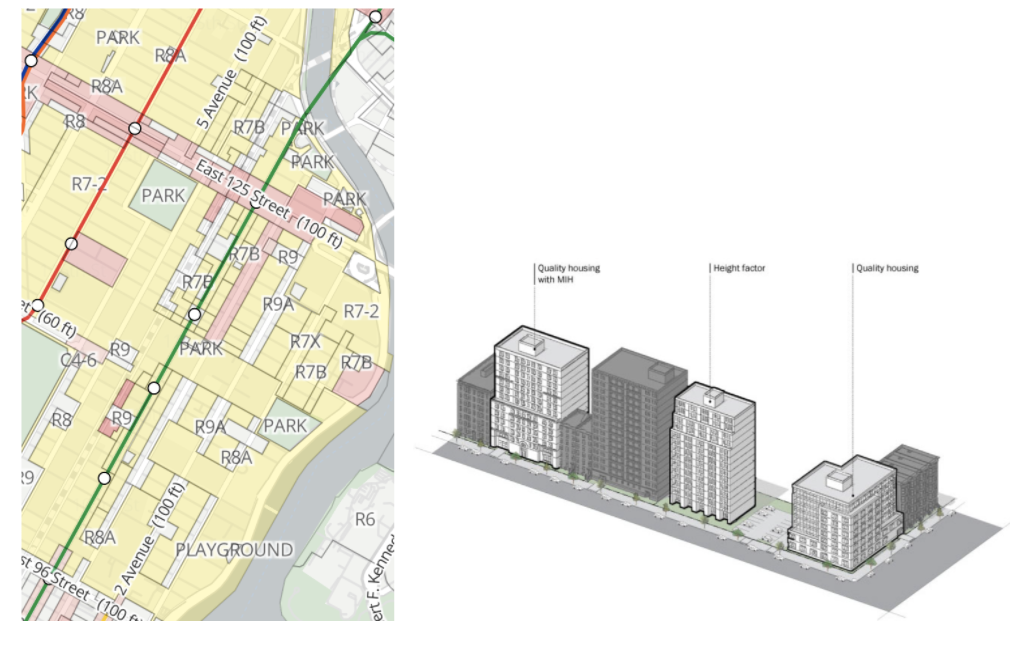 (The dominant R7 zoning (in yellow) of East Harlem; on the right is typical R7 massing. (NYC Planning))

Density for Living and Transit
East Harlem needs to be upzoned on a more comprehensive basis to make the most of the multi-billion dollar subway investment. Given the density of transit-oriented areas below 96th Street, R7 is not making the best use of this valuable new subway resource.

The rezoning should be at levels similar to the dense neighborhoods (R8-R10) below 96th Street on the Second Avenue Subway corridor. Only much greater residential zoning in East Harlem can attract developers and drive the creation of sufficient market housing to cross-subsidize thousands of additional low-cost units in East Harlem. These regulations should emphasize the deep affordability option under MIH to make sure the number of units and rent levels align with the neighborhood's needs. Neighborhood priorities will guarantee a fair share of these new affordable units for existing and future low-income neighborhood residents from redeveloped tenements.

With so much of the land tied up in low-density NYCHA public housing, rezoning alone will be insufficient to change much of the area. City leaders need to push harder on the redevelopment options for NYCHA projects in this specific area. Redevelopment isn’t suitable for many NYCHA developments elsewhere, and renovation is long overdue in almost all NYCHA buildings. Yet the logic in favor of comprehensive redevelopment is overwhelming for East Harlem because of the Second Avenue Subway project. 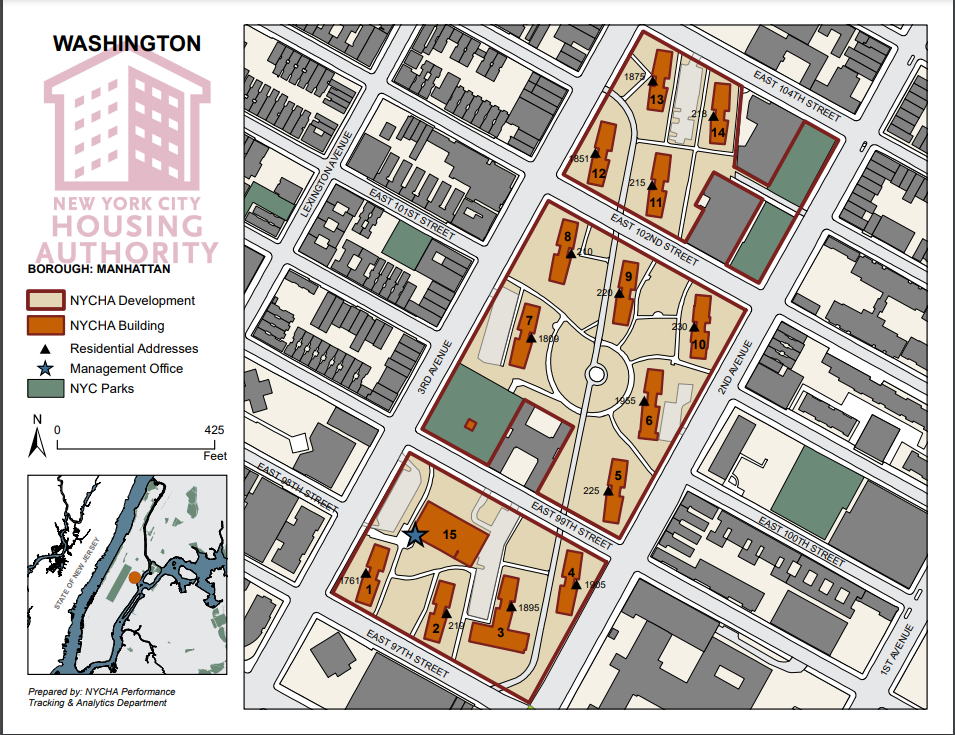 (Washington Houses is 86.3% open space, much of it lawns or surface parking. (NYCHA))

An antique East Harlem NYCHA development like Washington Houses has 1,151 apartments housing only 3,334 residents on 20.82 acres. That is a modest number of potential riders from such a large slice of Manhattan land. In contrast, rebuilding the housing project could house both current NYCHA residents and many times the number of future residents of various income levels.

Washington Houses is just one of many possible NYCHA projects in the area that could benefit from a redesign. Redeveloped projects could include thousands of new apartments, ground-floor retail, and social resources such as new schools and community centers. A selected portion of NYCHA open spaces could be preserved and then redesigned as New York City parks to serve their neighborhoods as community assets. The neighborhood would become much more vibrant with changes like these.

Substantial protections would be required to make sure NYCHA tenants get new apartments. Given the success of NYCHA organizing around RAD/PACT and infill development, it is reasonable to believe such protections could be secured from NYCHA, HUD, and private developers. The redevelopment would also permanently solve the longstanding mold and maintenance issues by leveraging private sector investment to rebuild from the ground up. Hopes for a federal bailout for NYCHA seem more remote by the day–yet conditions in many buildings continue to decline.

As recently proposed but now abandoned at NYCHA’s Fulton Houses, a staged redevelopment could ensure that residents are rehoused respectfully and systematically during the process. NYCHA residents would move into the first new building constructed on-site (on a former parking lot, for instance). Their vacated tower could then be demolished and redeveloped on a mixed-income model for tenants from the next NYCHA tower (and so on). This scenario is practical given the small number of current NYCHA residents compared to the future capacity of much larger buildings that would rise under rezoning.

Redevelopment may have some political capital in the new administration. Mayor Adams has not yet outlined a clear vision for NYCHA or affordable housing but is a fan of big ideas. Jessica Katz, the mayor’s new Chief Housing Officer, has been outspoken in her admiration for  London’s public housing regeneration programs. As Executive Director at Citizens Housing and Planning Council, she published CHPC’s report on “Public Housing Revolution” that highlighted how redevelopment in London created “entirely new neighborhoods . . . out of what were once superblocks of poorly maintained public housing.”

Redevelopment of East Harlem private “tower in the park” developments, most built initially with government aid, could follow a similar regeneration model with city encouragement through new zoning, incentives, and tenant protections. The Franklin Plaza Apartments, for instance, stretching from 106th to 108th Streets, could house many more residents who might like to live near the new subway stop at 106th Street.

The likelihood of planned densification of East Harlem, as proposed here, is remote given the dominant anti-development sentiment. Brave city leaders and activists will need to speak up for the needs of future city residents who could be accommodated under this proposal (or something similar). City leaders must also make sure that New Yorkers get their fair share of social benefits in return for billions in public transit investments. Deeply affordable Mandatory Inclusionary Housing requirements and public housing regeneration are two ways to achieve this goal.

Leaving current zoning/density in advance of the subway extension is a vote for market-driven gentrification. Big money will inevitably follow the subway lines into East Harlem. Left to their own devices, developers will add few affordable units in new buildings permitted under current zoning. Many of the existing tenement apartments will become more expensive. Most affordable housing interests will be priced out of the neighborhood. Fancy new buildings will rise around decaying NYCHA towers, as often happens elsewhere. Yes, these new private buildings will be less bulky than under a major rezoning, but that does not mean social equity will have been achieved.

The East Side Access project is a cautionary tale in failing to integrate transit and density. The $11 billion MTA megaproject bringing Long Island Rail Road riders directly to Grand Central moved ahead without upzoning the suburban towns on Long Island that benefit from this luxurious new asset. The city rezoned East Midtown for massive new office buildings and yet leaders left single-family home zoning dominant in the suburbs. The most expensive transit project in the nation will thus underperform because the potential residential market for new transit services remained artificially restricted by local governments. Without significant changes to land use in East Harlem, transit planning history will repeat itself with the Second Avenue extension.

***
Nicholas Dagen Bloom is Professor of Urban Policy and Planning at Hunter College and author of Public Housing That Worked (2008) and the forthcoming The Great American Transit Disaster (Chicago, 2023). He was a co-curator of the Housing Density show at the Skyscraper  Museum.