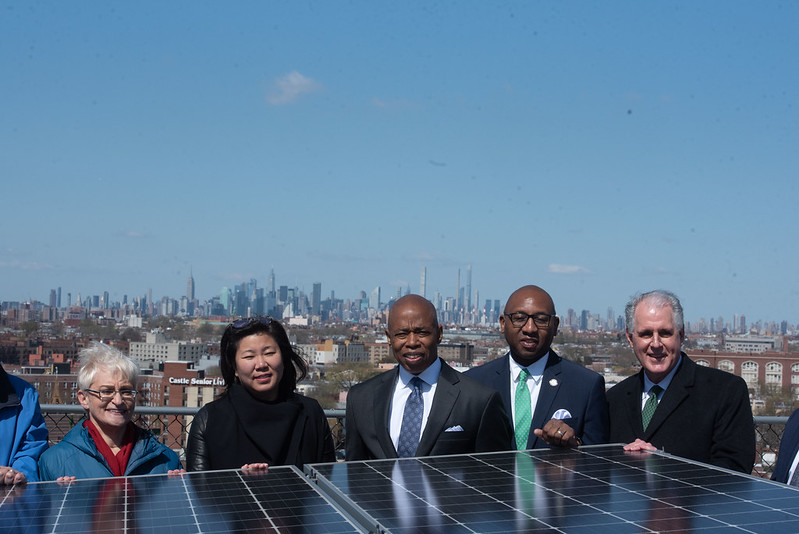 In 1883, Charles Fritts coated selenium with a thin layer of gold on a New York City rooftop to create a current activated by exposure to light, and thus the first solar panel was born. Though it achieved an energy conversion rate of just 1 to 2%, his work spurred the beginning of photovoltaic solar panel innovation across the world.

Since championing the first solar panel in history, New York City has fallen short on a list of solar leaders, ranking 36th in the nation for solar panel installation on a per-capita basis.

In New York City, innovative measures have gone into effect over the last decade that expand access to solar technology. One key measure was the passing of Zone Green in 2012, which allowed solar energy systems up to four feet in height as a permitted obstruction on the roof of a building. For R6 to R10 districts, where multi-family residential buildings are permitted, the systems could potentially go up to 15 feet but are limited by the zoning text to only 25% lot coverage of the roof. Most recently, New York City Comptroller Brad Lander is proposing Public Solar NYC, an initiative that would add at least 600 megawatts of solar capacity to the city's grid over the next eight years using New York's 1.6 billion square feet of rooftop.

Zone Green was impactful - solar panel capacity citywide quadrupled between 2013 and 2016, from 25 megawatts to 92 megawatts in 2016. These numbers contribute to the city’s overall goal of installing 1000 MW of solar technology citywide by 2030, which is estimated to save the city more than $70 million in annual energy costs, and decreasing its yearly carbon dioxide equivalent by over 105,000 metric tons. According to the New York City Comptroller’s Office on its recently published Climate Dashboard, the city is more than 70 MW behind in this year alone to be on track to meet the 2030 goal.

Despite this surge, Zone Green has since proven limiting for complete solar panel coverage on roofs and Public Solar NYC is sure to hit zoning roadblocks, impeding solar energy generation citywide.

Although the zoning text allows solar energy systems on roofs up to four feet high, it is very hard to fit adequate panels on a roof with all the other required uses, from mechanical and plumbing equipment to condensers and bulkheads, and keep to that height limitation. A typical new housing development can only cover about 33% of its roof with solar panels as it competes with these other uses.

Allowing solar energy systems to be elevated up to 15 feet certainly helps with this “competing uses on the roof” problem. A floating trellis for the panels can be elevated above other uses such as the bulkheads, mechanicals, and access in case of a fire. However, the current text only allows panels to cover 25% of the roof if they are elevated above four feet. Updating the zoning to allow 100% lot coverage for solar panels on roofs with 15-foot solar trellises would be an important step in reaching the city’s goal of 1000 megawatts by 2030. A floating trellis for solar panels would allow necessary safety and building systems to remain on roofs untouched while also accommodating solar panels.

The recently passed Special Gowanus Mixed-Use District adopted this change to permit 15-foot solar trellises and 100% lot coverage for solar. Inspired by this amendment, a recent solar study conducted across 15 Quality Housing projects found that increasing roof area coverage to 100% for 15-foot solar panels would increase the amount of wattage generated by solar panels by 290%.

This additional capacity is critical to advancing renewable energy production and to diminishing the load on transmission lines that connect the city to power stations upstate. Beyond adopting the Gowanus Special District text for solar panels citywide, the city should assume a 20-foot solar trellis height allowance. Another five feet would increase flexibility while increasing the efficiency of power generation by allowing greater circulation under the solar panels. Many of New York City’s leaders in green infrastructure, building, and design have signed on to support this change.

Zoning is a powerful tool that can support planning efforts and policy goals. Adapting Zone Green to increase and expand solar energy systems on large buildings would be a transformational step for the city to reach its climate goals and accelerate the city’s renewable energy transition.