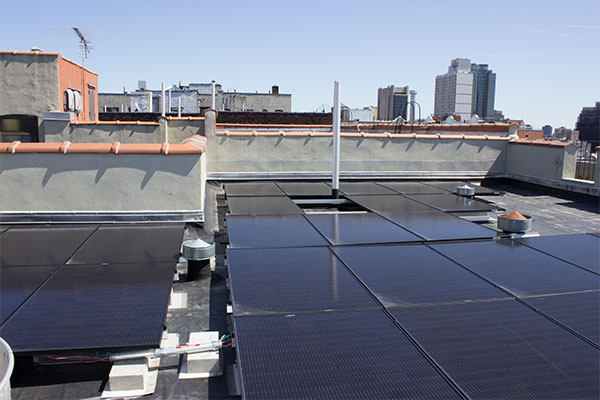 It was a small world on the roof of a five-storey co-op in West Harlem where Michael Anglin, the building’s treasurer, was showing off its solar panels.

New York City Comptroller Brad Lander and a team from his office were touring the configuration to understand what went into installing it in the heavily-regulated city, considered by industry insiders to be one of the hardest markets in the world to erect solar panels. Also there was Rit Aggarwala, Lander's long-time associate who advised his campaign last year, served in the Bloomberg administration, and was named by Mayor Eric Adams as the city’s Chief Climate Officer and Commissioner of the Department of Environmental Protection. So was former City Council Member Stephen Levin in his new capacity as the CEO of Solar One, a nonprofit that helps homeowners like Anglin navigate the permitting, financing, and contracting needed to install solar panels.

"We were committed to being as green as possible," said Anglin, who spearheaded the installation. "It was important to me, and so it became important to the board members."

The 20-unit co-op, which receives funding from the city to keep its apartments affordable, was rehabilitated 12 years ago with some minor environmental upgrades. But solar panels are a more costly endeavor in New York City and it was another decade before Anglin got that project off the ground. "We'd done all the little things that we could do," he told Lander and Aggarwala during the April 20 visit.

In Anglin's case, building the solar array involved state financing for the installers, state and federal tax credits from the co-op owners, and multiple organizations to help navigate the city's bureaucracy of building codes and energy permitting. Those brought the cost down to $49,000 making it possible for the owners to pay out of pocket. The benefits were clear: the panels would contribute to a cleaner electric grid while saving the co-op money in the long run, paying for themselves after three years.

But other building owners, especially of affordable housing, often don't have the resources or expertise to start. While there is some financial support, including a handful of state and federal tax incentives, and technical assistance – like the NYC Accelerator, a city program that provides expert guidance for energy-efficiency retrofitting – most building owners still bear significant costs and many are unaware of their options.

That has been an obstacle to scaling up the city's solar capacity, which is considered essential for reaching goals set by lawmakers to have 100% carbon-neutral electricity by 2050. That goal includes 1,000 megawatts of solar capacity by 2030, enough to power 250,000 homes, according to the Mayor's Office of Climate and Environment Justice, or roughly 7% of the city's housing stock.

The city will need to more than double the rate of solar installation to reach the 1,000 megawatts goal. As of March 31, 2022, only 302 megawatts of solar capacity had been installed in New York City since 2014, according to data from the New York State Energy Research and Development Authority (NYSERDA). Sixty-one percent of that capacity comes from panels placed on residential property.

The rooftop tour was part of an "Earth Week" fact-finding mission in the service of a concept Lander had talked about on the campaign trail and frequently mentions in public remarks: a publicly-owned solar-energy system using private rooftops. Lander believes the model will help increase the rate of solar installation to meet climate goals and boost homeowners' bottom lines at the same time. 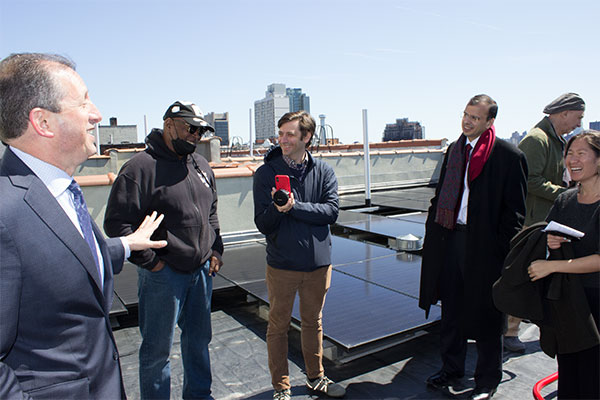 "As we were thinking, 'what does it mean to take a green approach to public finance,' we thought there would be an interesting opportunity to use the city's public finance capacity as part of our rooftop solar strategy," said Lander, standing on the Harlem rooftop.

His proposal, dubbed "Public Solar NYC," is evolving. At its core, it entails adding at least 600 megawatts of solar capacity to the city's grid over the next eight years using New York's 1.6 billion square feet of rooftop. The city would offer a one-stop-shop model to homeowners – owning, installing, and maintaining the solar panels, and paying building-owners rent to use their roofs.

The city would act as "financiers, project developers, construction managers, and permit expediters," said Louise Yeung, Lander's Chief Climate Officer and one of the architects of Public Solar. That will require action from both the mayor and comptroller and buy-in from the New York City Council.

In budget testimony before the City Council's finance committee last month, Lander called for $550 million in city financing over the next five years to seed the project. Under his current vision, the city would establish a local development corporation with the power to issue city-backed bonds and leverage existing tax incentives to spur private investment. The exact business model that could make the short- and long-term funding viable is still being worked out, according to Lander's office.

Mayor Eric Adams and the New York City Council are in the process of negotiating the city's roughly $100 billion budget, which is due by the July 1 start of the city fiscal year. As comptroller, Lander is responsible for monitoring and evaluating the budget. The mayoral administration is supportive of the concept of a public solar initiative but the details remain in the air.

"We're really enthusiastic about the potential of the concept and think it addresses many of the needs you see here," Aggarwala told Gotham Gazette standing over the array on Anglin's roof. "The challenge is, of course, you've got to find the money and we'd have to work together to think creatively about where the financing is going to come from."

On the campaign trail, Adams called for solar panels on city-owned buildings and said he wanted to encourage private investment in solar. As of 2022, the city has reached 16% of its de Blasio-era commitment to build 100 megawatts of solar capacity on publicly-owned rooftops by 2025.

“We are working closely with the Comptroller’s team to explore his Public Solar concept," said Kate Smart, a spokesperson for Adams, in an email. "We completely agree with the need to expand solar rooftops across New York City as we pursue our climate and environmental justice goals."

"For too long, solar has been a luxury only the wealthy can afford and we must ensure that New York’s lower-income homeowners have the chance to improve their planet, their local air quality, and their finances with solar,” Smart wrote.

There are other hurdles. The plan would require coordination among city and state regulators and overcoming the logistical challenges of rooftop installation, battery storage, and distribution. It would also need to flex the city's existing fire codes and zoning rules without sacrificing public safety, Aggarwala said.

"We're going to be taking a close look at what regulatory hurdles have a real reason and which are merely hurdles that maybe they made sense at some point but they've outlived their usefulness," Aggarwala told Gotham Gazette.

"We have seen batteries cause fires around the world and so we can't close our eyes to those risks," he said.

How the city would store power from rooftop solar, how it would connect to the energy grid, and who would be able to use it are all questions that would need to be settled. The answers will likely depend on the building infrastructure and type of housing of each private property under consideration. In the case of Anglin's co-op in Harlem, the solar array powers 90% of the common areas with an expected return on investment in three years, according to Levin of Solar One.

But Lander and Aggarwala agree private rooftops offer one of the city's largest untapped potential to expand solar power. In recent years, city and state lawmakers have each set renewable energy goals that are now up to the new administrations of Adams and Governor Kathy Hochul to pursue.

Lander's proposal also leaves room for community benefits outside of clean energy. It could entail new labor standards for workers on the projects and ensure they receive a prevailing wage, according to Lander's office, which is responsible for setting prevailing wage rates. It could also entail a workforce training component, something that Solar One currently offers.

Private buildings are "the biggest opportunity in terms of rooftops. It's just the inertia, the difficulty of getting, frankly, anything done," Aggarwala said.