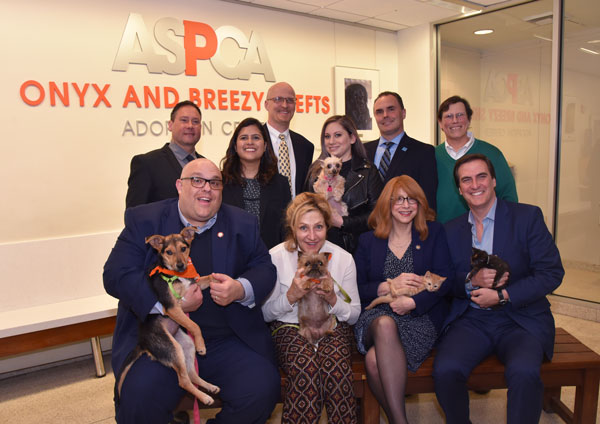 Last year, the ASPCA helped rescue over 500 dogs who were living in horrific conditions at multiple properties across Iowa that were operated by Daniel Gingerich, a USDA-licensed breeder. Despite documenting more than 200 violations of the federal Animal Welfare Act (AWA) at Gingerich’s properties – including dogs he allowed to die without being treated by a veterinarian, and dogs he failed to provide with adequate food and water, or to house them in safe and sanitary facilities – Gingerich continued to operate for months and likely bought and sold thousands of dogs during that time.

Based on documents filed with the state, more than one-third of New York’s puppy-selling pet stores – including stores in the Bronx, Queens, Brooklyn, Westchester, and Long Island – imported puppies from Gingerich to be sold to unsuspecting New Yorkers.

Gingerich was licensed by the USDA in October 2019 to commercially breed dogs and sell puppies wholesale to pet stores across the U.S. and he is not the first to profit from this irreparably broken system. Thousands have gone before him, permitted to operate despite documented – and undocumented – violations of the law.

Why? Because the USDA does not provide meaningful oversight of breeders or any assurance that dogs whose safety and well-being rest under its authority are kept in humane conditions. Daniel Gingerich and scores of other commercial breeders continue to operate despite known chronic violations of the law showing the long-term suffering of animals in their care.

It is up to New York to do more to prevent this cruelty from flourishing within our state. Daniel Gingerich and others like him exist because the retail sale of puppies is still legal in many states – including ours – providing an outlet for puppy mills to continue selling dogs kept or raised in unspeakable conditions, far from the public eye.

The Puppy Mill Pipeline Bill (A.4283/S.1130) – legislation introduced by Senate Deputy Majority Leader Michael Gianaris of Queens and Assemblymember Linda Rosenthal of Manhattan – would stop these cruel businesses from profiting off New Yorkers by ending the retail sale of dogs, cats, and rabbits in pet stores across the state.

The pet industry would like you to believe that it’s unfair to restrict the handful of pet stores that still sell puppies, kittens, and rabbits from buying from “legal” licensed mills. But federal laws intended to protect these animals are so poorly enforced that a licensed facility can violate the law over and over again with virtually zero risk that the USDA will shut them down, so there is no way to assure New Yorkers that the puppies sold in stores were raised humanely.

Of the 1,000 pet businesses in New York State, fewer than 75 still sell puppies. Instead, the overwhelming majority of these stores sell food and other products, offering services such as grooming and boarding, or partnering with local shelters or rescues to host adoption events to drive consumers to their stores. The success of these businesses illustrates that stores can make money without capitalizing on cruelty.

With just a few days left before the New York State Legislature adjourns, time is running out to protect our state’s consumers, public health, and animal welfare. The Senate recently approved the Puppy Mill Pipeline Bill by a wide margin with strong bipartisan support, and we urge the Assembly to swiftly follow suit by passing this legislation to finally end the retail sale of puppies in pet stores.

***
Bill Ketzer is senior director of government relations for the ASPCA. On Twitter @ASPCA.