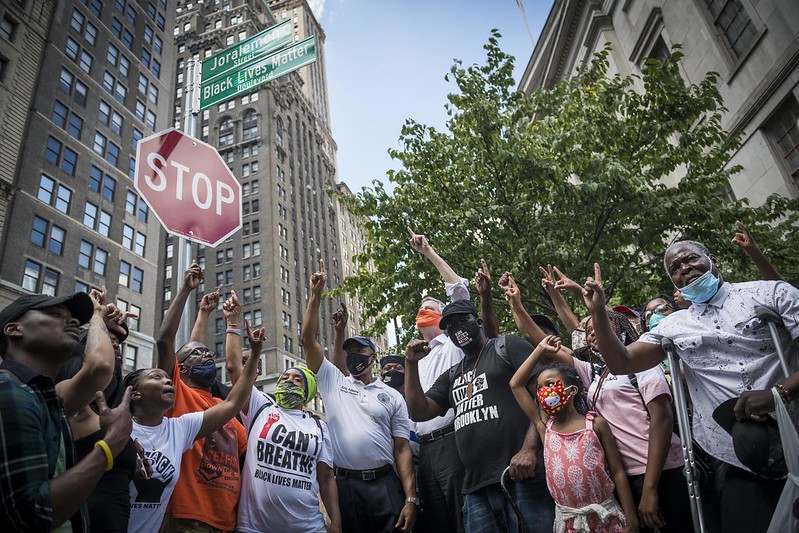 We need new investments in producing safe, healthy, and economically secure communities that will also create thousands of new jobs for New York City residents. We propose the creation of a New Deal for Public Safety that would both invest in new infrastructures for community safety and create thousands of new jobs in professions designed to help lift up individuals and communities rather than criminalizing them.

The newly-adopted fiscal year 2023 New York City budget shows reductions to funding for various essential services while giving police and corrections budgets a pass. Compared to the latest modified budget for the current fiscal year (FY22), Mayor Adams and the City Council have reduced spending on homelessness services by $414.5 million, parks by $11.5 million, education by $215 million, sanitation by $171.8 million, and public hospitals by $1.6 billion, while holding the budgets of the NYPD and Department of Corrections steady at a combined $13 billion.

Part of the support the mayor has received is because many working class families -- including his own -- have come to rely on jobs in policing and corrections as a ticket into the middle class. Police officers make over $40,000 to start and within six years can see earnings as high as $100,000 with overtime and differentials, not to mention excellent benefits and the possibility of retirement after 25 years. These are very high salaries for young people with only two years of college or similar military experience; and correction officers earn even more.

The high salaries and employment stability operate as a kind of “poverty draft,” drawing in young people who see few other options on the job market for those with sometimes minimal qualifications. It also offers the allure of “doing something positive for the community.” Many young people from struggling neighborhoods want careers where they can be part of the solution and since the police and correction departments are often hiring and pay high wages, they are drawn to them.

I, David, have faced these pressures first-hand. I wanted a job that would help my community, had potential for advancement, and that would be able to support my growing family. I worked as a home health aide — a caring profession that the community needs —but that didn’t pay enough, and I had to supplement the income by driving for Uber and Lyft.

My family and friends experienced similar constraints. Loved ones who had initially wanted to work in health care or education found that the low salaries those jobs offered, as well as the expensive education needed, simply squeezed their families too tight, and instead turned to jobs as cops or correction officers — careers that have high wages, security, and good benefits.

The constant availability of policing jobs relative to other professions reinforces the idea that policing is how we produce safe and secure communities. Young people look to criminal justice academic programs because they know there will be jobs in this area. Jobs in libraries, youth services, parks and recreation, public health, and other related professions either require significantly higher educational certification or pay much less, and none of them are as readily available. We need to change that equation.

To start, we need to move away from the idea that policing is the primary way to create safety.

Over the last several decades we have seen that there is inadequate funding for basic social needs. We have closed down recreation centers, defunded mental health services, skewed housing markets to benefit wealthy developers in ways that produced mass homelessness, underfunded schools, and turned a blind eye to predatory lending practices, environmental degradation, stolen wages, and discriminatory and exploitative landlords.

Instead of trying to solve our city’s problems by investing in community programs, we’ve put a huge amount of money into policing and used the police to manage the consequences of disinvestment in communities. We have turned the problems of homelessness, mental health challenges, harmful substance use, youth unemployment, and failed schools into problems of crime and disorder to be managed by policing. There are more NYPD personnel in New York City schools than counselors of all types combined. This is a crisis of priorities that must be addressed.

The solution to our challenges is not more policing and incarceration. It is more community-based mental health services, substance abuse specialists, school counselors and support staff, community-based violence interrupters, construction of supportive housing, and creation of good-paying jobs.

By rethinking the delivery of public safety we can also create new pipelines for employment for young people. We propose that New York City commit to a long-term hiring plan in professions that will create real public safety.

Under our proposed New Deal for Public Safety, we would create 5,000 new positions a year over the next five years for a total of 25,000 permanent new community-based public safety jobs in government agencies and local non-profits.

We could immediately expand the number of jobs that directly contribute to building healthier and safer communities. Many of these jobs would not require any more education or certifications than police officers, including jobs as youth recreation workers, community anti-violence specialists, library support staff, homeless outreach workers, and drug related harm-reduction workers. Wages, benefits, and job security for these jobs should be increased to match what we pay police. We also need new investments in building, rehabilitating, and maintaining public housing, community centers, and schools that could put thousands to work in well paid unionized construction jobs.

In addition, we need to expand hiring in areas that require more education such as mental health outreach workers, school counselors, drug treatment specialists, and trauma counselors. These jobs are essential to any plan to reduce violence and disorder. In order to prepare young people for these careers we need to partner with CUNY to create new programs to train and certify those who are interested in helping foster public safety. Once it is clear that these jobs exist, students will flock to them.

This would need to be baseline funding, not one-time investments and should come from both local and state government. Too often, community-based support services are seen as short-term add-ons or discretionary priorities for a particular City Council member. This leads to inefficiencies due to turnover, start-up time, and lack of consistent support for people in crisis.

I, David, have worked with several community-based family support programs in Brooklyn that were consistently under-funded and ultimately shut down based on the whims of policymakers. The result is a lack of confidence in these types of programs and an inability to produce robust long term positive effects.

Creating a new, permanent community-based public safety infrastructure will not only improve the quality of life of all New Yorkers, it will also create important new pathways for stable careers, allowing us to move away from our reliance on policing and jails.

***
David Alexis is a candidate for New York State Senate in Brooklyn’s 21st District. Alex S. Vitale is professor of sociology and coordinator of the Policing and Social Justice Project at Brooklyn College and the author of The End of Policing. On Twitter @David4BK & @avitale.