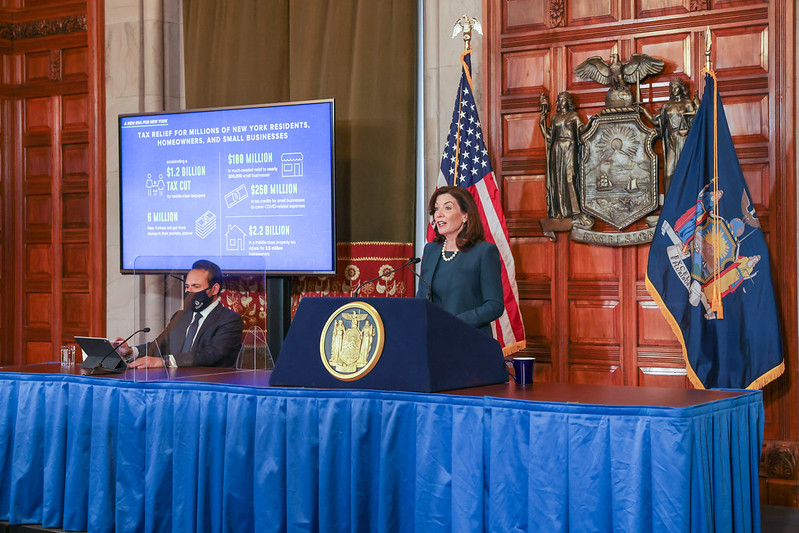 California concluded its state budget with Governor Gavin Newsom’s signature on June 30, choosing a different path than New York to provide its residents a break from inflation.

California chose to provide modest relief to nearly all its residents through an income tax rebate this October. The Governor’s press release described the state’s action by saying, “Global inflation. Rising Costs. It’s hard out there and we know it. So, we’re giving you $9.5 billion back.”

New York State adopted its budget April 9. While there were many similarities in the two states’ budgets — from large school aid, college aid, and health care increases, bonuses for health care workers, and even large set-asides of cash reserves for the future — New York chose to funnel its main upfront benefit overwhelmingly to homeowners, followed by a benefit for car-owners.

The Hochul administration already completed the former in June, despite originally scheduling the benefit for October. The New York homeowner tax rebate, while certainly worthy in and of itself, falls far short as a broad equitable distribution of the state’s resources of the kind that California is undertaking to provide some relief amid rising costs.

Over the course of weeks, about 2.5 million New York State homeowners and cooperators began receiving tax rebate checks worth about $2.2 billion in sum from the state government. A note accompanying every check announces Governor Hochul and the New York State Legislature are providing the money to “help pay your property taxes.” The rebate was authorized in the state budget adopted in April but envisioned distribution in October. Despite the initial billing as help with property taxes, the governor’s office had rising inflation on its mind in this statement about speeding up the rebate.

"Given rising costs and national inflation, the Department of Taxation and Finance has been working to deliver these benefits to eligible homeowners as quickly as practicable and not delay relief,” the state said. Accelerating the rebate also gave Governor Hochul an easy political benefit in her June Democratic primary, which she won handily.

New York’s property tax rebate ranges from a hundred dollars to more than $2,000, depending on a homeowner’s income and their local property tax burden, and the program includes about 480,000 New York City homeowners and cooperators.

The relief is linked to a longstanding New York property tax relief program, called STAR. New York actually has 4 million owner-occupied households, according to recent Census data, but homeowners and cooperators with incomes above $250,000 a year, who I estimate might comprise as much as 15% of those 4 million, are not eligible for the rebate.  Almost 1 million owner-occupied households are not eligible for other reasons, because they never applied for the STAR program in the first place, or the formula in the rebate program excludes homeowners eligible for less than $100.

Still, 46% of New York’s population is tenants and they were not eligible for the rebate. There is a relatively small percentage of tenant households with incomes above $250,000, but not many (Census figures show about 10% of New York tenants have incomes above $150,000). New York’s budget did include other kinds of tax relief, from additional credits under the Earned Income Tax Credit program to the temporary elimination of 16 cents on the gasoline tax (barely noticeable as gas prices have reached $5 a gallon), and an already-planned income tax cut that will mostly phase in next year.

Between the exclusion of renters (almost half the population), and the administrative issues with the STAR program, as much as 60% of the state’s households won’t get the special direct check from the state meant to help people amid rising costs. This does not mean that low- and middle-income homeowners across the state in areas with high property taxes aren’t getting some meaningful relief.

But California’s plan covers homeowners and tenants. And while it is titled the middle-class tax rebate, the benefit is structured around residents who file income taxes, creating a more equitable, broadly-beneficial program amid record inflation.

A married couple filing a joint tax return in California with an income of $150,000 or below with one dependent would qualify for the maximum benefit of $1,050. A resident filing a single return with an income below $75,000 would qualify for $350. A tax filer with a dependent gets an extra $350. Single filers earning between $75,000 and $125,000 get $250 refunds, and households between $150,000 and $250,000 in income that file jointly receive $500, with a dependent getting an extra $250. Single taxpayers earning up to $250,000, and joint filers earning up to $500,000, are also eligible for refunds. Supplemental Security Income recipients would also get some extra money. California’s homeownership rate, at about 55%, is quite similar to New York’s 54%. The 3.9% sales tax on diesel fuel is also suspended in California, with commercial and farm vehicle owners intended as beneficiaries.

Governor Newsom’s original budget plan, submitted in March, proposed that residents get debit cards worth up to $400, based on motor vehicle registrations. The Legislature rejected that plan in favor of the income tax rebate.

In New York, no plan to add further relief from either the governor or the Legislature occurred following the April budget, even as inflation worsened. Inaction persisted all the way to the end of the regular legislative session despite the state budget division presenting its Enacted Budget Financial Plan in late May showing the state sitting on staggering sums of money.

The closing balance for Fiscal Year 2022 (end of March) in the General Fund was $33 billion, with $14.78 billion available, including $2 billion set to be added to the state’s eviction relief program and provide for other emergency needs like foreclosures and utility bills. There is also over $18 billion in two special accounts (Extraordinary Monetary Settlements and Pass-Through Entity Personal Income Tax Credits-PTET/PIT) for which there are special plans. The General Fund balances don’t include another $8 billion in federal funds left from the American Rescue Plan, which was passed by President Biden and Congress and the state seeks to use over the coming three years.

In May I wrote about New York’s budget plans and the significant influx of revenue beyond projections coming into the state treasury, and offered a proposal to provide income tax rebates that bears a rather uncanny resemblance to the deal California has now reached. I also suggested further cuts to gasoline taxes and mass transit discounts for New Yorkers to help drivers and non-drivers.

With several months of additional information on tax receipts and state spending, my projection that there would be about $4 billion above the Enacted Budget remained accurate, including $2 billion in funds beyond both the Executive Budget final updates and the adopted budget (see State Comptroller May 2022 cash report).

Governor Hochul’s decision to pull the trigger on the state’s property tax rebate in June instead of October effectively brought the state’s inflation relief package to a close, along with the gas tax suspension that began in June. It’s unfortunate because there is so much money available the state could still offer more help, even while acknowledging it needs to keep most of its cash stored away in reserve in case of a recession.