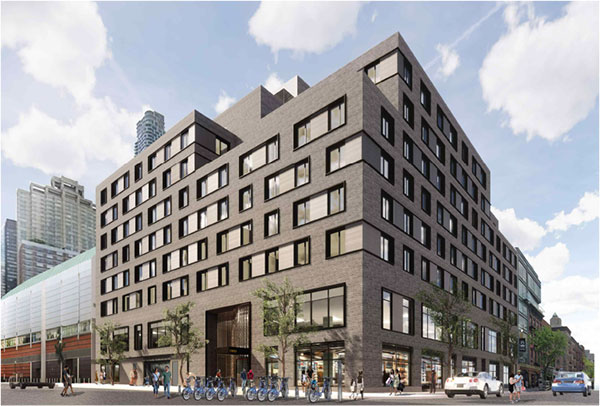 A rendering of The Lirio

The ongoing affordable housing crisis in New York City requires bold solutions. We must house more people, especially in vulnerable populations. In Hell’s Kitchen we have an opportunity to do just that with The Lirio, a newly proposed 112-unit affordable housing development, which will include affordable homes for long-term survivors of HIV/AIDS.

New York City has been in an immense housing crisis for decades. Although our population and job demand have grown, we haven’t built enough housing to keep up. Now we have a substantial deficit of affordable housing, and especially deeply affordable housing. The pandemic exacerbated the need for housing as labor and supply chain constraints have further slowed construction. Many families have been forced to leave their homes due to high rents, and scores more may be set to follow them when eviction protections expire.

This is especially true of more vulnerable populations, such as people living with HIV/AIDS, whose own position in their homes might already be tenuous. To fully recover, the city must build quality affordable housing to provide homes for families of all types who need them. That responsibility extends to all neighborhoods, especially wealthier enclaves in Manhattan like Hell’s Kitchen.

According to the latest data from the New York City Department of Health and Mental Hygiene, Chelsea-Clinton has the highest rate of reported persons living with HIV as a percent of its population of any neighborhood in New York City. It is also the neighborhood with the second-highest rate of HIV diagnoses in the city. As available services and medical care for this population have grown and improved, those afflicted are living longer, better lives, and need more services, including housing. It is our shared responsibility as a city to provide survivors of HIV/AIDS with affordable homes so that they can live full lives.

The Lirio will help combat the city’s housing crisis and serve as a model for the rest of the city. It is a newly-proposed mixed development by the city’s leading real estate development company Hudson Inc., and Housing Works. Located at the corner of 54th Street and 9th Avenue, the 112-unit Hell’s Kitchen project would include 59 units of supportive housing targeted at long-term survivors of HIV/AIDS, along with affordable housing, office space for the MTA, and neighborhood retail.

Housing Works, a well-respected social services organization founded by members of ACT UP focused on fighting AIDS and homelessness, will provide on-site services and access to HIV-specific primary and behavioral healthcare at a new Housing Works medical facility on West 48th Street. With the help of Housing Works, The Lirio is the right solution to bolster Hell’s Kitchen and protect affordability while providing the critical tools needed to fight HIV transmission and protect people living with HIV.

We must act quickly – each month that we delay this new housing is another month during which it doesn’t house the populations it can support.

We have the opportunity to make progress on the goal so many of us have been advocating over the years: to provide affordable housing for our most vulnerable populations in a neighborhood where rising rent makes it harder to live there every year. To make change in this community, we must do everything in our power to support The Lirio development and the people it will benefit.

***
Moses Nakamura is a member of Open New York and a resident of Chelsea. On Twitter @OpenNYForAll.