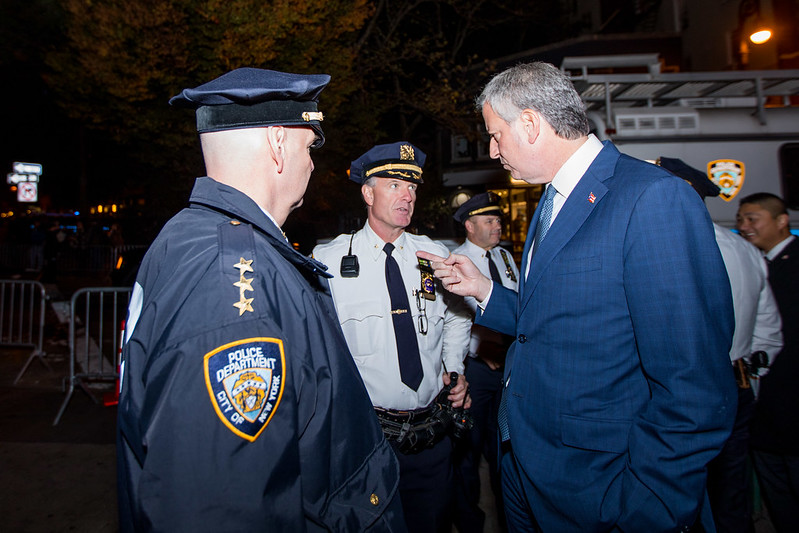 Since the pandemic started, thousands of Black New Yorkers across the state have taken to the streets demanding that government officials treat our lives with dignity. A full year of pandemic grief, loss, and anxiety in places like Brooklyn and Buffalo has deepened our question: What would it look like if city spending truly invested in our everyday problems instead of inflated police department budgets?

Instead of spending on surveillance drones and riot gear, could we redirect public money to what we actually need—laptops for our students, emergency mental health care for our neighbors, support for the back rent so many out-of-work friends owe?

This past June, Governor Cuomo, under pressure to deliver police reform, issued Executive Order 203 (EO 203), requiring local governments to submit police reform plans to New York State by April 1. These plans mandated the leadership of mayors, county executives, police chiefs, sheriffs—local officials who are often targets of police accountability campaigns. Organizers like us and our groups’ members—working class, professional, and low-income Black folks—often don’t make it on their outreach lists.

EO 203 was a move by the governor to step in and moderate change in a time of uprising. By design, the process led by police and municipal leaders was meant to undermine our demands, falsely presenting the voices of a selected few as the will of the many. Using state funding as the means to hold municipalities accountable only exacerbated this issue.

Between our two organizations and decades of organizing in Black communities, we know that the only real way to drastically reduce police violence is to reduce the outsized funding, power, scope, and footprint of police departments and police unions.

The plan passed by the New York City Council last month included nothing that will directly decrease police violence or increase firings of abusive police or accountability – two criteria that should be central to any real police reform plan. Mayor de Blasio’s “community engagement” process to create New York City’s plan was a sham, and the final resolution that the City Council passed, and the mayor supported, lacked many reforms that would directly address policing. Those that do address policing directly are things that were already agreed to or required by law.

New York City’s plan includes moving homeless outreach from the NYPD to the Department of Homeless Services, which was agreed to last year and hasn’t been fully implemented. The NYPD is seemingly continuing its inhumane practice of carrying out homeless sweeps. The portion of the plan that talks about accountability and transparency relies on the NYPD ‘discipline matrix,’ which incentivizes and tolerates a wide range of police violence and codifies that officers will not be fired for many instances of violence.

In Buffalo, Mayor Brown hand-selected the members of Buffalo’s Commission on Police Reform, which released the reform agenda to the public with only 72 hours for public comment via email or voicemail. Like in New York City, the reforms put forth in Buffalo are either reforms the city committed to several years ago, and never implemented, or agenda items that would increase the community’s interaction with police. This plan also backtracks on previous community wins, specifically around police in schools. The four-page plan is one of ideas, with no concrete measures to bring any of them to fruition, leaving the public wondering: is the city actually committed to reform?

Both the Buffalo and New York City plans included provisions that may lead to continued expansion of bloated police budgets and footprints in Black, Latino, and other communities of color, like more training for officers, and failed to remove police from  schools—a long-held demand of the movement.

Governor Cuomo’s mandate was a failed attempt to get ahead of an organized, bold, Black-led movement. EO 203 and the plans that resulted are meant to undermine our demands while claiming to be the answer. But the movement for Black lives and police accountability isn’t going away until our people get what we deserve.

As organizers, our reality is that if police departments could reform themselves, we wouldn’t be fighting at all.

***
Anthonine Pierre is a steering committee member of Communities United for Police Reform (CPR) and Deputy Director of the Brooklyn Movement Center. Phylicia Brown is the Executive Director of Black Love Resists in the Rust (BLRR), based in Buffalo. They serve together on the steering committee of the NYS Black Freedom Project. On Twitter @AnthoninePierre & @BLRRBuffalo.