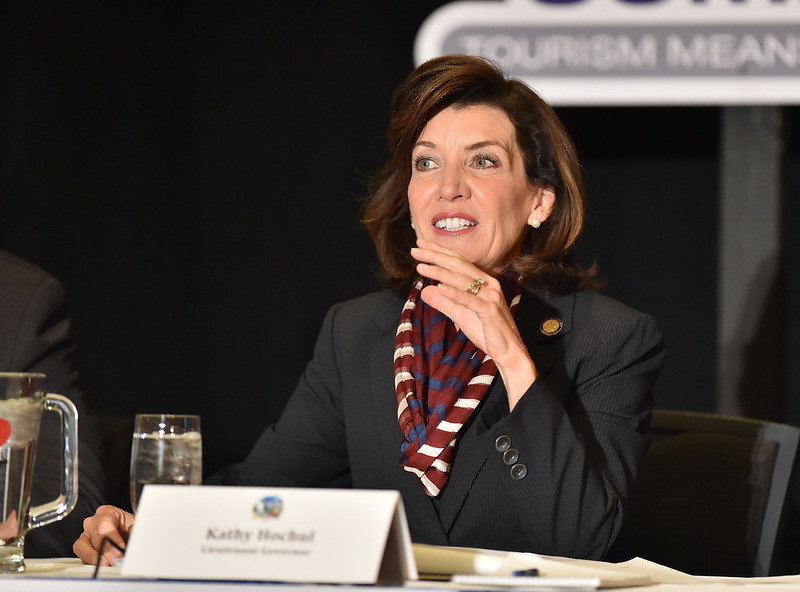 Kathy Hochul is the ninth New York lieutenant governor to become governor through the state constitutional process to fill a vacancy.* But she will be just the second to appoint a successor to the office she herself vacates. David Paterson was the first. This  provides her a unique opportunity to improve New York state government.

Lieutenant Governor Paterson became Governor in 2008 when Eliot Spitzer resigned in disgrace. Notwithstanding the centuries long practice of leaving the lieutenant governorship unfilled when it was vacated in the midst of a term, Paterson appointed respected civic leader Richard Ravitch of New York City to the post.

Unprecedented and unexpected, Paterson’s action ultimately survived a challenge in the state’s high court. It was part of his response to a major state fiscal crisis in a time of chaotic partisan tugging and hauling for control of the State Senate. In contrast, Hochul’s choice will be an integral element of her transition into the governorship. It will therefore surely be placed under a microscope for early indications of her ideas about government structure and reform, her approach to decision-making and her early thinking about the nature of the coalition she envisions she will need to win the full term she has said she will seek in 2022.

The job of lieutenant governor, David Patterson reminisced, was to get up in the morning and check the news to be sure that the governor had survived the night. If so, he could confidently sleep in. In fact, apart from presiding over the State Senate, a largely ceremonial role, the state constitution and statutes give the lieutenant governor virtually no responsibilities – or powers – a fact that has been lamented by almost all who have held the office, and actually has driven some from it.

Candidates for governor routinely say that their first consideration in choosing a running mate is the person’s ability, if called upon, to do the top job. The political reality is, however, that aspirants to the lieutenant governorship are considered first in accord with the long established major party practice of presenting the voters with a demographically and geographically “balanced ticket” in statewide elections. Governor Hochul – an upstater, a woman, a former Congress member – was herself a beneficiary of ticket-balancing. She was selected by Andrew Cuomo as his running mate in 2014 when Lieutenant Governor Bob Duffy declined to run again.

Adhering to the idea of balance, Hochul has said she will appoint someone from New York City and she is widely expected to choose a person of color (Hochul is white). If the experience of another Paterson appointment to statewide office is any precedent – the choice of Kirsten Gillibrand to serve in the U.S. Senate when Hillary Clinton resigned her seat to become Secretary of State – there are numerous prominent Democrats already pushing hard to be selected. Among those mentioned are State Senators Brian Benjamin of Manhattan and Jamaal Bailey of the Bronx and Bronx Borough President Ruben Diaz, Jr.

In reality those running for Governor in New York make no definitive choice of running mate. This is because though New York voters cast a single ballot to fill the two offices, party nominations for Governor and Lieutenant Governor are subject to separate primary elections. This creates the possibility that the preference of the gubernatorial candidate for the lieutenant governor nomination may not end up being his or her running-mate. Hugh Carey did not pick Mary Anne Krupsak. Mario Cuomo did not pick Al Del Bello. Hochul herself had to defeat Tim Wu in a statewide primary to secure her 2014 nomination, and win another primary to survive a challenge in 2018 by Jumaane Williams (a potential candidate for statewide office again) to her renomination.

Yet because the Lieutenant Governor has virtually no formal powers, his or her role in state government is almost entirely dependent upon developing a strong, trusting supportive relationship with the Governor. This can happen. Malcolm Wilson was involved in almost every major decision made by state government during his 15 years as Nelson Rockefeller’s Lieutenant Governor. Stan Lundine played an important role as the Lieutenant Governor for Mario Cuomo’s second and third terms. In contrast, George Pataki’s Lieutenant Governors, Betsy McCaughey Ross and Mary Donohue, were entirely marginalized. Hochul herself, though smart and able, was rarely drawn into the center of decision-making on the Capitol’s second floor during the second and third terms of Andrew Cuomo’s administration. (Notably, all of these marginalized lieutenant governors were women, as was Krupsak, who resigned after a single term to run against Governor Hugh Carey, the governor with whom she was elected.)

The next step: revising the election law to require Governor and Lieutenant Governor be nominated as well as elected as a team.

*A tenth, John Taylor, acted as governor for about four months when Daniel Tompkins resigned to become Vice president, as the state constitution in force in 1817 did not provide for full succession to the office.