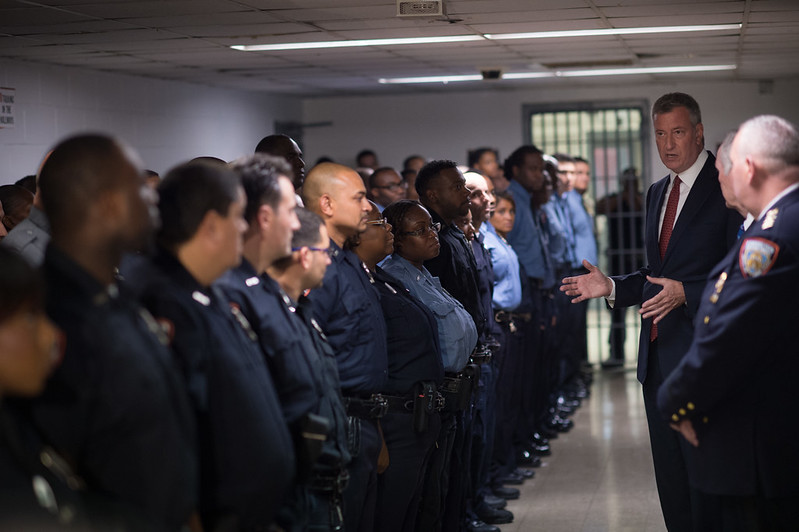 There is a humanitarian crisis unfolding right before our very eyes on Rikers Island. The conditions that incarcerated individuals and staff are subjected to at the city’s jail complex — conditions that have been reported and documented by news accounts and the personal observations of many of my colleagues in government — are on par with, perhaps even worse than, what we expect to read about in countries without a commitment to human rights.

As my colleague Assembly Member Emily Gallagher recently witnessed, “there's garbage everywhere, rotting food with maggots, cockroaches, worms in the showers, human feces and piss. Most of the toilets are broken so men are given plastic bags to relieve themselves in…Because of the lack of security, everyone's scared they're going to be injured or killed. Most people have fashioned some kind of homemade weapon to defend themselves.”

So far this year, ten incarcerated individuals have been killed, including four by suicide.

Exacerbating this crisis is the toll the pandemic has taken on the personnel who work at Rikers Island. To date, more than 2,200 corrections officers have been affected by the coronavirus, resulting in a massive staffing shortage that has continued to spiral, forcing officers to work double, triple, and in some cases, even quadruple shifts without any relief. Many officers resort to sleeping in their cars between shifts, not wanting to drive home for fear of falling asleep at the wheel. Absenteeism is also on the rise, with an estimated 2,000 officers calling in sick on a daily basis. In some cases, prison units have even gone 24 hours without guards.

In addition to the consequences for the workers, the majority of whom are people of color, these conditions inhibit our officers’ ability to conduct important services, such as protecting incarcerated individuals from assault and taking them to their court appearances. As the crisis continues to worsen, officers are less and less able to fully perform their jobs safely. The family of deceased inmate Robert Jackson believes that his death was caused, in part, by the fact that a guard in his 20th consecutive hour of work stepped away from his post. This was an utter tragedy that could have been prevented.

This is the reality currently playing out inside Rikers. Incarcerated individuals and personnel fear for their lives and have been left to fend for themselves by the Mayor and Department of Correction. As one officer I spoke with told me, "Inmate, officer, at this point we’re all on the same side. We all just want to get the hell out of here. People don’t see us so we don’t exist.”

Just this week Mayor de Blasio announced a widely panned five-part plan to address the staffing crisis plaguing the jail facility, but did so without even talking to the union and staff who work there currently about what they need to do their job safely and humanely. Notably, the mayor did not commit to ending triple and quadruple shifts for officers, and instead, the heart of the plan is to punish public workers who call out sick. Placing the blame solely on officers, who did not start this fire, is a poor excuse for a solution.

This is an all-hands-on-deck moment for New York City. We need a comprehensive solution that will take into account the full scope of the atrocities that are happening to workers and incarcerated individuals on Rikers.

There needs to be a substantive dialogue between the Department of Correction and the correction officers union to address ongoing safety and staffing concerns. In addition to that substantive dialogue, there are two key pieces of legislation that could help abate this crisis.

The “Less is More” bill helps facilitate the release of people currently incarcerated on Rikers merely for technical, and not criminal, parole violations by putting them in front of a judge to determine whether they should continue to be in jail, thereby lessening the burden on the rest of the overburdened system. It currently awaits Governor Hochul’s signature.

Additionally, Senator Jessica Ramos has proposed legislation, S6688, that would cap the number of consecutive hours any city employee can work at 17. Frankly, even that number may be too high, but it’s better than 25. I urge all of my colleagues who care about what is happening at Rikers, and care about all workers, to co-sponsor this important bill.

The truth is this: if these workplace conditions existed in any other workplace, and for any other workers, we’d all be out in the streets protesting in outrage. If it’s not OK to work sweatshop hours as an Amazon warehouse employee, why is it OK to work multiple 25-plus-hour days in a week if you are a public servant of color with a uniform and a badge?

It’s time for us to solve this crisis. It’s to engage with everyone with the common purpose to save the lives of everyone on Rikers Island. It’s time for the City of New York to make a clear and unequivocal statement that these public servants and incarcerated individuals should not be subjected to work or live in inhumane and brutal conditions.