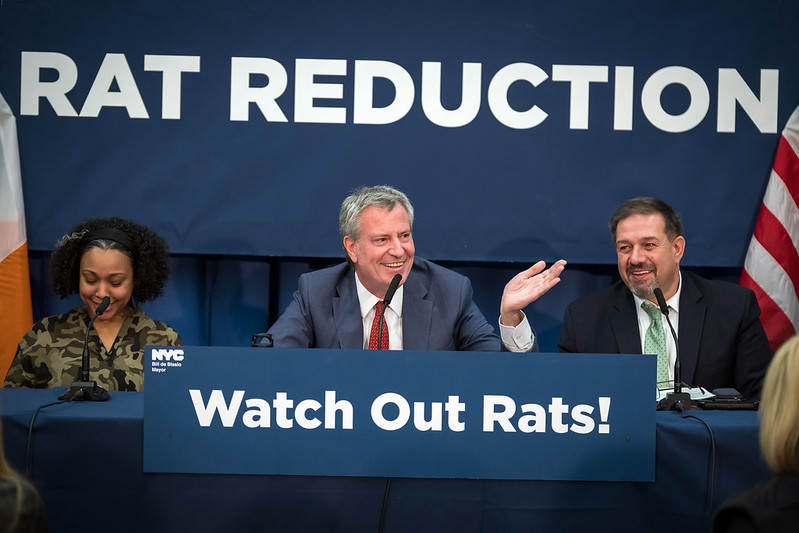 New York City is inundated with rats! Dirty, dangerous, destructive rats that are also very aggressive. The phrase “Brazen as a New York City rat” has a solid foundation in reality. Mostly we tolerate rats because we think there’s nothing much to be done about them. A few traps, some poison, maybe a new garbage can, but, typically, not much beyond such meager efforts..

It seems that Ida, the recent historic storm, did manage to drown a large number of rats. However, such events are rare enough, maybe even still so in this era of climate change, that we may not be able to depend on them as methods of addressing our city’s rat problem.

Also, mayoral candidate and Brooklyn Borough President Eric Adams became infamous for his approach to addressing the rat problem: drowning them in a stew of deadly chemicals. After Adams put his method on full display, some commented on its cruelty. It may be cruel, but it’s also likely ineffective. The rate at which rats reproduce is too fast for drowning them to make much of a dent in their census. What if there’s a more effective way to get rid of all, or almost all, rats in the city? The solution is simple and reasonable, and partly, already exists.

The rats are here for food, and no city feeds rats as often or as well as New York. Three times a week every building in the city places plastic bags full of food waste on the sidewalks, plastic bags that are accessed by rats with ease.

My wife and I -- beginning empty nesters, since our daughter is now away at college -- no longer walk after dinner if it’s a night when garbage bags are put out for collection. Rats darting across the sidewalk and running in and out of bags were more than enough to discourage us. My wife, a social worker in East Harlem who knows several families in public housing, said the rat problem there is much worse than what we see in our Carnegie Hill neighborhood.

Many of the buildings, particularly in public housing high-rises with large numbers of tenants, generate huge quantities of food waste that is easily accessible to rats. As a result, rats are in the garbage areas of the buildings, in the buildings themselves, in individual apartments, and even, horribly, sometimes in children’s beds biting them. It’s that bad!

Yet the solution to this terrible problem is simple: stop feeding the rats.

The city already has in place a pilot program that allows business improvement districts (BIDs) to apply to have their waste and recycling placed in sealed containers before being picked up by sanitation workers. This is a good start, but we need to go much further and fast.

What we should do is pass a city ordinance requiring all residential and commercial buildings to place their food waste on sidewalks in bins that are rat-proof with secure lids. If an ordinance were  passed forbidding anyone from putting food waste on the sidewalk for collection, unless it were in a rat-proof bin with a secure lid, that would go a long way toward solving our rat problem.

Achieving the same end, but even better, would be an ordinance mandating composting: a mandate that food waste must be separated out and disposed of in rat-proof bins. The city had a trial composting program for selected buildings, which was suspended due to fallout from COVID-19, but it’s back up. With that program going again, but mandating composting city-wide, the vast majority of food waste from the entire city would be kept away from rats, while at the same time serving as composting material for the program and accomplishing green goals.

New York lags behind other cities in composting food waste, and rat-proof disposal in general. We must catch up.

It will be necessary to give building owners and managers, business owners, and others time to implement rat-proof disposal of their food waste. It may take a few months or more, but if it is mandated and the right city support is there, before long everyone would be doing it, just like almost everyone separates recyclables now. If we separate recyclables, we can also separate food from other household waste.

If rats' food supply is suddenly cut off, could this cause a desperate reaction leading to them running helter-skelter across the city looking for food? There will be some reaction for certain. But this plan would not be implemented overnight. Before the entire city was composting all food waste, some months would pass. And likely it would be a year before everyone was in compliance. During that time, the rat population would decrease as less food was available and would continue to decrease as the city moved toward complete compliance.

Further, as rats were being denied food waste, various traditional methods for killing them would become more effective than previously because they’d be hungry enough to eat the poison or go for the food in traps. That is not the case now.

Currently, there’s a lot going on in the city. The Delta strain is on many people’s minds. The city is still struggling with around 10% unemployment. And there’s been an uptick in some types of violent crimes. Maybe, some might say, this isn’t the time to focus on the city’s rat problem. But New York City can and must do many things at once, always. Adopting this program to eliminate our rat problem, and make the city more livable and walkable in the process, wouldn’t by any stretch mean it couldn’t still deal with other issues. Quality of life issues, like the current rat invasion, must be addressed -- just ask those who have to share their homes and beds with rats, or those dissuaded from going for a walk due to the piles of trash on the streets and the rats that enjoy them.

It will take a concerted effort by residents, building owners, managers and supers, businesses, city government, and others to make sure there is virtually no food waste accessible to rats anywhere in New York. It’s a goal we can achieve. In fact, we are on the right track with the city’s composting program as well as the pilot program, mentioned earlier, which allows BIDs to place their waste in sealed containers. The idea behind my proposed ordinance is to expand these efforts to include virtually all food waste in the city. That way, there will be little or no food for rats, and the city’s composting program will be a success: a real twofer. Let’s do it!

***
Michael A. Lewis is a professor of statistics and economics at Hunter College’s Silberman School of Social Work and the CUNY Graduate Center. On Twitter @MichaelALewis10.