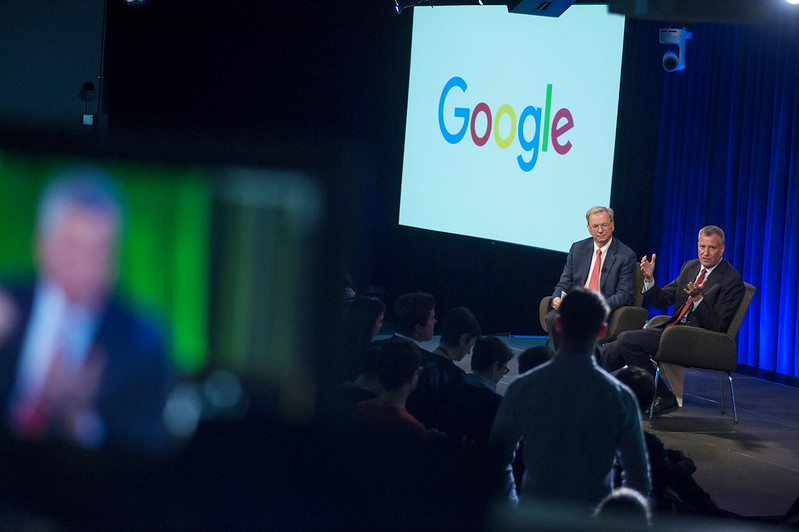 In September, Google announced that it will expand its physical presence on the West side of Manhattan by purchasing St. John’s Terminal. The price tag? $2.1 billion. The new office space will open in 2023, and when it does Google will be one of the largest leaseholders in the city.

In 2023, approximately 46,000 undergraduate students will graduate from the City University of New York (CUNY) system, assuming current enrollment and graduation trends hold. Over 60% will come from families with annual incomes of less than $30,000.

The CUNY system has been touted as an engine of economic mobility in New York City, but it’s critically neglected. New York needs to inject capital investment from large corporations, like Google, into the CUNY system if it is serious about economic growth and sustainability. To do this, the city should raise property taxes on the 50-plus New York City-based Fortune 500 companies and appropriate the money to the CUNY system. This investment should eventually eliminate the burden of tuition for all students.

Tuition dollars account for 40% of CUNY’s funding, the second-largest source behind state dollars. This means the burden of supplying gasoline for the “engine of economic mobility” falls significantly on students and their families. CUNY is a proven driver of social mobility, but this practice— underfunding one of the city’s best educational resources— is dampening the system’s potential impact. This can change, however. We only need to look toward St. John’s Terminal.

By raising property taxes on NYC Fortune 500 companies and investing that money in the CUNY system, the city will see a stronger path-to-college pipeline from underserved public high schools and increased economic development in low-income neighborhoods. The buck can’t stop there, however. These Fortune 500 companies must also invest in internship and mentorship programs with individual CUNY schools, which would benefit all involved as public-private partnerships.

Over 80% of CUNY graduates stay in New York City post-graduation, meaning money invested in CUNY is money invested in the future of New York City’s workforce. With the financial and institutional support of locally-based Fortune 500 companies, low-income communities will reap the benefits of generational economic development as more young people are able to attend college and attain higher-paying jobs as a result. Furthermore, creating these public-private partnerships would give corporations that call New York City home improved access to a diverse network of talented future professionals who can take their companies to the next level.

Until the financial crisis of 1976, CUNY was free for city residents. Now, undergraduate tuition is $6,930 a year for full-time students at four-year colleges and $4,800 annually for full-time community college students. It’s not hard to see how, for a family with a household income of less than $30,000 a year, this is crippling. Eliminating CUNY tuition by taxing large corporations will both lessen the burden for struggling students and open the door of opportunity to students who might not have otherwise been able to afford college at all.

Students and their families aren’t the only ones who stand to gain from these partnerships. Requiring social investment in addition to compulsory financial investment in CUNY institutions will allow NYC-based companies to attract, develop, and tap diverse talent in its incipient stages. Not only that, but they can make good on their promises to recruit and hire more diverse talent in the coming decades. CUNY students are over 65% Black or Hispanic. Partnering CUNY institutions with industries that are predominately white will be one step on the path to desegregating some of the largest corporations in the country.

To be sure, some corporations are already investing in mentorship and internship programs in CUNY schools. In August of 2021, for example, the CUNY “Futures in Finance” program launched in collaboration with Bloomberg LP, Centerbridge and Goldman Sachs. This program aimed to “cultivate a vast pool of untapped talent and enable companies across the finance industry to engage students from first semester through graduation.” While this is surely the right idea, it is currently only available for students at three CUNY campuses and does not address students’ costs of tuition. Pairing an initiative like “Futures in Finance” with a capital injection and implementing it at scale would create the broadest and boldest pathway to development for New York City’s future workforce.

Critics might argue that raising corporate taxes will deter organizations from coming to the city. Raising taxes on corporations, however, is one of the highest polling issues across party lines, supported nationally by nearly two-thirds of Americans. When Amazon announced in 2018 that it would build a new headquarters in Long Island City, Queens,  a broad coalition of opponents protested the fact that the corporation would receive over $3 billion in tax incentives and grants. The backlash ultimately led Amazon to pull out of the deal in February 2019. Now, as the city continues to recuperate from pandemic-related shocks, it’s more important than ever not only to avoid these kinds of missteps, but to ensure private businesses and public enterprises like CUNY experience equitable recoveries.

If private companies like Google can afford billions of dollars in office space, they can surely spare the change for deeper investment in their own backyard. By implementing a capital and social investment system at scale, more students will be able to attend college and businesses will have access to more fresh, diverse talent. Creating public-private partnerships and raising taxes on corporations will move the city closer to making the CUNY system the world-class engine of social mobility New York students deserve.

***
Devynn Barnes is a graduate student at the New York University Wagner School of Public Service studying International Development Policy and Management. She has worked in both elementary and high schools in the Bronx.