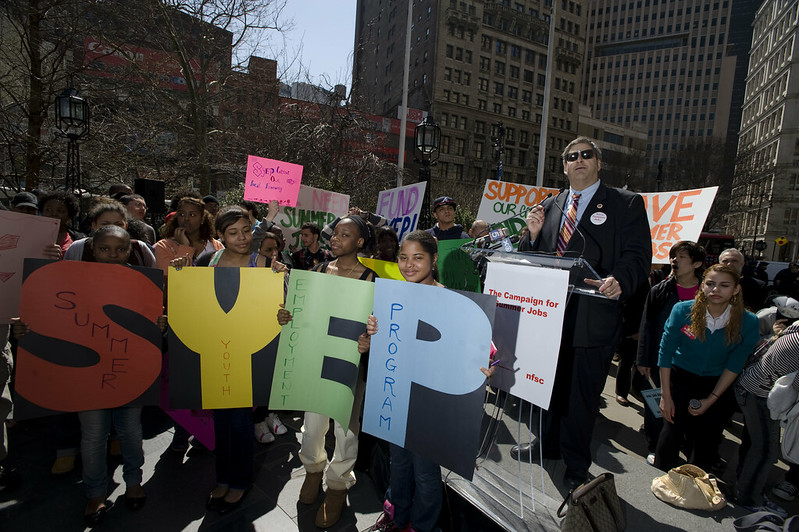 Interventions for Children and Teens
Many kids don’t feel safe going to school each day due to violent crime. As argued by Jane Jacobs, simply having more eyes on the street can deter crime and make streets safer. Chicago's “Safe Passage” program built on this insight by placing civilian guards along pedestrian routes traveled by students to and from schools. Safe Passage not only reduced student absenteeism (which could have beneficial public safety effects in the longer-term), but it also reduced violent crime by up to 20% while the program was underway.

The two studies found that BAM reduced violent-crime arrests during the year of program participation by 45–50%. BAM appears to work by helping teens slow down and reflect on whether their automatic thoughts and behaviors are well-suited to the situation they are in, or whether the situation could be construed differently.

Providing summer jobs to teens reduces violent youth crime not only during the period of employment, but also afterwards. There is now strong evidence from three major cities that summer jobs are an effective intervention.

We could also do more to help families create a safe living environment for their children. For example, when children test positive for high lead exposure, the Centers for Disease Control and Prevention (CDC) recommends they receive a bundle of services, including help with lead remediation and nutritional counseling, to reduce future lead exposure and to mitigate the effects of previous exposure. Using data from Charlotte, North Carolina, researchers found that children who received the CDC-recommended intervention had fewer subsequent arrests for violent crime, as well as other delinquent behavior, when compared to similar children whose blood-lead-levels were just under the threshold and so did not qualify for services.

Economic Stabilization
Economic insecurity can increase crime. When individuals don’t have a safe place to live, it is more difficult to maintain employment, and the likelihood of violent altercations in shelters or on the street increases.

In Los Angeles County, single adults experiencing homelessness are randomly assigned to caseworkers. An evaluation documented that providing housing assistance substantially reduced the number of jail bookings and criminal charges over the following 18 months. These beneficial effects are driven primarily by permanent housing programs. It appears that 80% of program costs are recouped by direct savings to various public agencies (including the criminal justice system) within the first 18 months of housing provision.

Providing short-term financial assistance is also helpful. For example, Chicago's Homelessness Prevention Call Center connects families and individuals who have experienced a negative economic shock with immediate, one-time financial assistance, but the availability of funding varies unpredictably. A study found that when funds were available, callers were 51% less likely to be arrested for a violent crime, relative to similar callers who received no funds. The decline in crime appears to be related, in part, to greater housing stability.

The timing and mode of distribution of short-term financial assistance can matter. For example, providing social benefits electronically rather than via cash may reduce violent crime. And staggering the payment schedule for social benefits over the course of a month also helps reduce crime.

Another study documented that expanding Medicaid eligibility to include more low-income adults led to sizable reductions in rates of robbery and aggravated assault. A similar impact was seen when Medicaid expanded after the Affordable Care Act: states that expanded Medicaid saw annual violent crime rates fall by 5.3% relative to non-expansion states.

When low-income young men in South Carolina lost access to Medicaid at age 19, their likelihood of incarceration in the subsequent two years increased by 15%. This increase spanned multiple categories of criminal behavior, including violent crime. The social cost of this additional crime exceeded the costs savings from reduced Medicaid eligibility. The effects of Medicaid access were primarily driven by men who relied on Medicaid for access to mental health medications.

There is growing evidence that “greening” vacant lots and installing better lighting have important crime-reducing effects. One experiment found that shifting daylight from the morning to the evening via Daylight Saving Time led to a 7% decrease in robberies. A randomized controlled trial that placed temporary street lighting in New York City housing developments found that improved lighting substantially reduced street crimes.

A growing body of evidence shows that pollution increases violent crime. For instance, moderate- to high-levels of lead exposure for kids increases violent and delinquent behavior later, presumably by affecting brain development. In addition, day-to-day variation in exposure to pollution – such as air pollution from factories or cars – increases local violent crime on the days of exposure. Reducing exposure to such pollutants can thus have immediate violence-reduction benefits.

Traditional law enforcement tools such as police and incarceration continue to play an important role in fighting crime. But as we consider what to do about rising violent crime rates in cities across the United States, the evidence suggests that investing in civic goods such as education, health care, and neighborhood improvement can reduce violent crime in the short- to medium-term.

Of course, the crime-reduction benefits are often only a fraction of the overall benefits of the interventions studied; these efforts can also improve educational outcomes, employment, and health as well. But even if we only focus on the crime-reduction effects, it is clear that we are dramatically underinvesting in such programs. New York City and other places would be smart to change this.

***
Anna Harvey researches criminal justice and judicial decision-making and is the President and CEO of the Social Science Research Council. Jennifer Doleac studies crime and racial discrimination as a Professor at Texas A&M University and is the host of the Probable Causation podcast. On Twitter @annalilharvey & @jenniferdoleac.