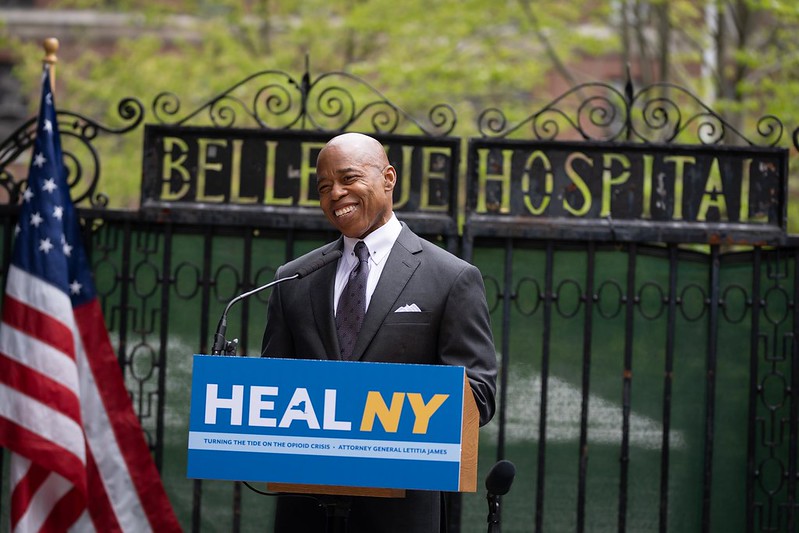 Typically, the scorching hot summer months bring a rise in violence, but there’s much more than temperature at play. Last fall, a Violence Interrupter in Brooklyn shared with us his greatest concerns as we moved to the colder months. He noted that the sunset of extended unemployment benefits would cause more families to be under stress, leading more kids to leave their turbulent home environment in search of solace and kinship in the streets.

It’s not complicated from his perspective.

But this simple and poignant analysis of how poverty leads to violence is rarely reflected in conversations around the city budget.

If we allow public safety to be defined in the context of policing, prosecution, and incarceration, we should not be surprised when we see our jails and courts overwhelmed. Court delays have skyrocketed since the covid pandemic and Rikers Island remains under federal monitoring. Just last month the monitor released another report detailing the mismanagement and violence faced by those detained at Rikers and by the correction officers themselves. We now spend more than half a million dollars annually per client in the Department of Correction – about five times more than in Chicago and Los Angeles – clearly more money for police and jails will not fix this problem.

No Health, No Justice
The Commission on Community Reinvestment and the Closure of Rikers Island released a report last December detailing the root causes of incarceration and the various city agencies empowered to pursue prevention and community-oriented public safety initiatives. From street lights to school nutrition, from youth employment to sanitation, the city’s investments in our residents and our communities pay dividends for decades to come.

Notably, the Mayor is obligated by local law to respond to the recommendations set forth in the report, with oversight from the City Council. The Commission’s Subcommittee on Health laid out a few core principles to frame this conversation. As with our violence interrupter’s story above, the first idea is a simple one: Ensure quality health care is available in the community so the carceral system becomes the last resort for accessing health-care services.

Who could argue with that? Why isn’t this already the case? Regrettably, our reality is far from this ideal.

The Commission report describes health-care deserts, akin to the food deserts we learned about over the past decade. The same communities that are overburdened by the criminal justice system also suffer from worse physical health, mental health, substance use, and social outcomes, mainly due to a lack of access to quality care. Despite the best efforts of the city health department to highlight these disparities, and marshal appropriate resources to respond, this generational inequity persists.

The next section of the report highlights key opportunities to pursue health equity through reforms to the State Medicaid system. The state’s current plan prioritizes individuals and families impacted by the criminal legal system. Most notably, it seeks to activate 30 days of Medicaid coverage prior to release from incarceration, to allow community-based providers to engage clients before they transition back to the community. This will improve the health and stability of some of our most vulnerable residents, and will save taxpayer dollars by preventing emergency room visits and unnecessary hospitalizations.

The state is also planning to roll out hundreds of millions of dollars in opioid settlement funds in the next decade, offering us the chance to build the community substance use treatment and mental health service infrastructure that was promised in the 1970s but never fully materialized. This would mean the ability to access care, same-day, in your own community. No two-month wait list, no travel across the city or county, no wrong door – just quality accessible services including peer supports, safe stabilization spaces, and affordable medications.

These changes will arrive too late for a client we’ll call Stephanie, whose plight is all too common. Stephanie suffers from serious mental illness and when she left prison in 2016 she went to the emergency room for a psychiatric evaluation. Her parole officer threatened to send her back to prison if she did not start taking the $2,000/month prescription medications listed in her release documents. But those documents also listed an incorrect address for Stephanie, preventing her insurance coverage from activating upon her release. With proper insurance coverage, Stephanie could have returned to the same out-patient psychiatric provider she used prior to her incarceration, but she was left without access to this care. The stress of these events further complicated Stephanie’s mental illness, and she was soon admitted to the inpatient psych unit following an incident of self-harm. All because someone listed the wrong address on her paperwork.

We can help future Stephanies and the city can lead the way.

The New York City Council recently held hearings to examine Mayor Adams’ latest budget proposal, hearing from his appointed agency leaders on how they plan to serve the residents of New York City in the year ahead. City budget negotiations are now ongoing before an adopted budget is due by the end of the month.

Let’s take the lead from our sage Violence Interrupter and keep it simple. Protect, support and build up the weakest and most vulnerable among us, and we can all thrive together. That’s the New York Stephanie and the rest of us deserve.