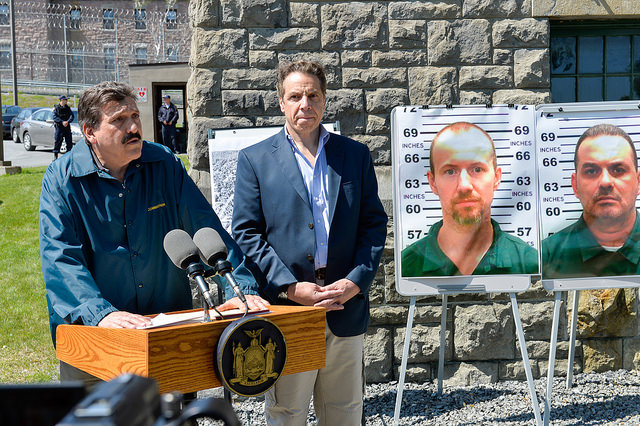 Last week, State Senator Jesse Hamilton mailed a flier to his constituents strongly denouncing broken windows policing. The senator, who represents Crown Heights and surrounding neighborhoods in Brooklyn, called on the city to end arrests for minor quality-of-life offenses that “are often used to police black and brown bodies.”

The week before, during a speech in Manhattan, Governor Cuomo disparaged Mayor de Blasio for failing to close the notorious Rikers Island jail, accusing the mayor of “impotence.”

These criticisms of the city come as the state government, led by Cuomo, struggles to make its own reforms to New York’s criminal justice system. Current state budget negotiations include a push to “raise the age” of criminal responsibility so that 16- and 17-year-olds are largely prosecuted as juveniles, not adults. But the measure, which is seeing new daylight this year, has faced strong opposition from Senate Republicans for years, despite the fact that New York is now one of just two states that tries 16- and 17-year-olds as adults.

Senate Republicans want teenagers charged with violent crimes to be tried as adults and they want all 16- and 17-year-olds tried in criminal, not family, court.

The Republican Conference holds a plurality in the Senate—and the power that comes with it—in part because Senator Hamilton and the seven other members of the Independent Democratic Conference (IDC) do not caucus with the Democrats. Nominal “Democrat” Senator Simcha Felder caucuses with Republicans, giving the GOP a 32-seat bare majority in the 63-seat chamber.

But Senator Hamilton says that far from diluting the “raise the age” effort, his position in the IDC empowers progressive reform like it. “I, along with my colleagues in the IDC, have pushed Raise the Age further than ever before in the New York State Senate,” he said. “My advocacy around broken windows policing is motivated by my support for Raise the Age.”

For their part, city officials are defending their approach and pointing the finger back at the state. At a recent press conference, Mayor de Blasio was asked about Cuomo’s Rikers comments, and said, “Our job is to address this crisis [on Rikers Island]. We’ve been doing it for three straight years…The state’s job is to take care of the state prison system."

City Council Member Carlos Menchaca exchanged sharp words with Senator Hamilton on Twitter, asking him, “What law are you advancing at the state level to curb the impact of Broken Windows policing?”

Since that exchange, Senator Hamilton has introduced a bill to make turnstile jumping -- perhaps the prototypical broken windows offense -- a violation instead of a misdemeanor. Evading the subway fare is a charge the NYPD disproportionately brings against young black and Latino New Yorkers. Since city police enforce state laws, that is one avenue state legislators could use to influence city criminal justice.

Senator Hamilton, who is black, spoke of his son as a motivation for opposing broken windows policing and for supporting raising the age. “He’s at an age where ‘the talk’—about young black men, safety, and interactions with police—is not an abstraction.”

If the state raises the age of criminal responsibility, it will be the first major criminal justice reform legislation since the law ending the shackling of pregnant inmates in 2015. Executive action on prison reform has also slowed recently. After closing 13 prisons in his first term, Governor Cuomo has not closed any since 2013, even while the state prison population has continued to decline.

Last year, the governor also vetoed a bipartisan bill that would have increased funding to public defenders in the state. Cuomo insists he’s open to similar legislation but that it must be done through the budget.

And a New York Times report about rampant racial bias in New York State’s parole system led Cuomo to launch an investigation, but no findings have been made public and the parole system is unchanged.

Parole reform is on the list of criminal justice changes that advocates have long hoped New York State would take up. The list also includes reform to the bail system, ending the use of solitary confinement, and a bill to accelerate trials. Republican control of the Senate, aided by the IDC, makes further reforms less likely.

“The speedy trial bill, Kalief’s Law, should be a no-brainer,” said gabriel sayegh*, the Co-Executive Director of Katal, an organization fighting mass incarceration. “It would reduce pre-trial detention in jails.” The bill passed the Assembly unanimously, but has stalled in the Senate. “Even common sense bills that have bi-partisan support don’t get done,” sayegh said.

“I don’t think it’s a problem when state folks speak out on city issues, or vice versa,” continued sayegh. “We are eager to have the governor support the speedy trial bill, which would help us close Rikers. We want to see Senator Hamilton follow through by advancing legislation at the state level that addresses disparities in policing practices and arrests. They should connect their comments to action.”

***
Brenden Beck is a PhD candidate in sociology at the CUNY Graduate Center researching police, suburbs, inequality, and housing. On Twitter @BrendenBeck.

*sayegh spells his name with all lowercase letters