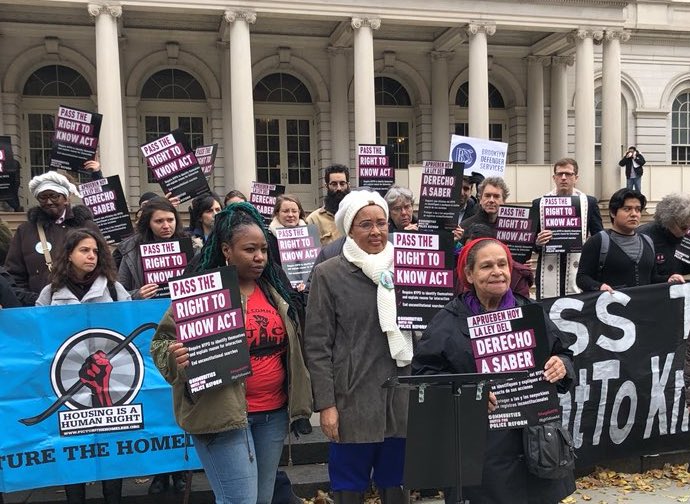 On Tuesday, the New York City Council passed two police reform bills. One marks a vital step toward police reform and accountability. The other takes our city in the wrong direction.

First the good news: a consent to search bill, sponsored by Council Member Antonio Reynoso, passed with support from over 200 community organizations, including the families of New Yorkers killed by police, and organizations led by homeless, LGBTQ, undocumented, and formerly incarcerated New Yorkers, and black and Latino youth. The bill will require the NYPD to create a policy directive that mandates that police officers notify New Yorkers of their right to refuse a search if the officer does not have probable cause to search them.

The NYPD will also have to document proof of consent, and ensure translation if necessary, so all New Yorkers comprehend it is their constitutional right to refuse searches without probable cause. It is a common sense and long overdue reform that will enhance accountability measures and increase protections for New Yorkers during interactions with officers.

The second bill, sponsored by Council Member Ritchie Torres, was opposed by over 200 community organizations, all five public defender offices, 100 Blacks in Law Enforcement Who Care, the National Latino Officers Association, and the Grand Council of Guardians. This legislation, known as the police identification bill, will in some situations require police officers to provide New Yorkers with a business card identifying the officer and an explanation for the stop.

As with consent to search, community members had pushed for such legislation for years. But inexplicably, because of last-minute changes, the final bill intentionally excludes traffic stops as well as the majority of non-arrest street encounters with police officers. It also includes a broad exception that significantly limits the NYPD’s responsibility to provide New Yorkers with an explanation for why they are being stopped.

Here’s what the holes in the final police identification bill mean in practice. If a young person is coming home from school and an officer asks him, “what are you doing?” or “where are you going?” or has his hand on his gun when he commands, “show me your ID,” that officer will not be required to provide a card identifying him- or her-self after the encounter.

If multiple officers corner a young person in front of her building and begin asking similar questions, they will not be required to provide identification after the interaction. If an officer stops a transgender woman and wants to know “why are you on this block,” or “what are you doing tonight,” this law will not ensure they know who is stopping them and why they are being stopped.

These everyday encounters for many young black, Latino, and transgender New Yorkers, which are just as likely as any other police interaction to lead to misconduct, harassment, or even abuse by officers, have been carved out of the bill without sufficient explanation.

President Obama’s 21st Century Task Force On Policing recommended law enforcement agencies require officers to identify themselves by their full name, rank, and command in writing to individuals they have stopped and provide an explanation for the stop. This past summer, the city of Albany, New York passed a bill requiring just that from their police officers.

New York City is not setting a baseline for future police reform. The baseline has already been set. By passing a bill that creates exceptions for thousands of stops and interactions with police officers, New York is merely confirming the NYPD sets police legislation and setting a weak precedent for other localities.

The Right to Know Act originated from the experiences of New Yorkers most impacted by police misconduct and abuse, including the families of those killed by police officers, and black and Latino youth from Bushwick, Bedford-Stuyvesant, and East New York who have led our organizing efforts. No one—not Council Member Torres, Speaker Melissa Mark-Viverito, Mayor Bill de Blasio, or NYPD Commissioner James O’Neill—has offered these young people any explanation for excluding common stops and interactions they are forced to navigate on a daily basis. If New York City is committed to “neighborhood policing,” someone should explain why those neighborhood cops shouldn’t simply hand over a business card and offer an explanation after stopping a New Yorker.

It has been over three years since the world watched an NYPD officer choke the last breath out of Eric Garner’s body on a Staten Island sidewalk. Now, this City Council has passed the only bills since that fateful day that address transparency, accountability, and protections for New Yorkers during interactions with the NYPD. It’s good news for all city residents that the Council passed a strong consent to search bill. But it’s deeply unfortunate that the Council allowed the NYPD to squeeze through a gutted version of police identification legislation that comes up short of the necessary reform that so many New Yorkers have spent the last five years demanding.

***
Kesi Foster is a lead organizer with Make the Road New York, which a member of the Steering Committee of Communities United for Police Reform. On Twitter: @MaketheRoadNY.