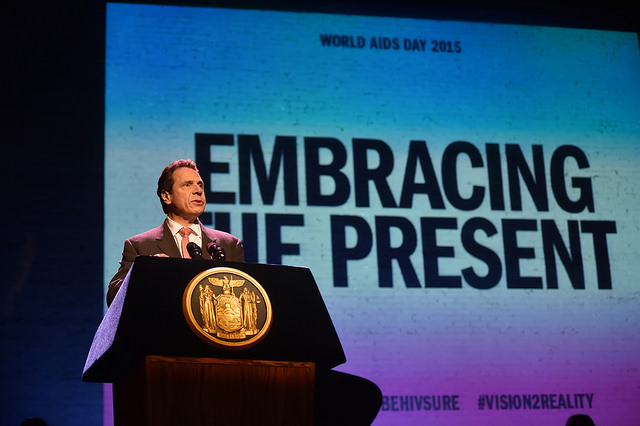 The year 2016 could go down in history as the pivotal year in New York's fight against HIV/AIDS. Nearly 35 years after The New York Times reported the first cases of what would later be recognized as AIDS, New York State is poised to become the first jurisdiction in the world to end its HIV epidemic, even without a cure, by stopping new infections and ending AIDS deaths.

Thanks to Governor Andrew Cuomo's leadership, New York State has developed a viable plan that, if fully funded and implemented, will end our AIDS epidemic by the year 2020, and can become a blueprint for all 50 states and Puerto Rico. Now, for the plan to succeed, every New York community must match Governor Cuomo's commitment with renewed energy, support, and action.

Governor Cuomo launched New York's Ending the Epidemic initiative in 2014 by announcing a three-point plan to expand HIV testing, treatment, and prevention to decrease new HIV infections from 3,000 a year in 2013 to less than 750 by 2020. He pointed out that we have the tools: Current antiretroviral medications can keep HIV-positive persons healthy and stop ongoing transmission of the virus, and, when taken as prevention, they can protect those at highest risk of HIV infection.

We now must work to remove barriers to treatment and prevention so all New Yorkers can benefit equally from these advances. These obstacles are also linked to social disparities, including lack of access to health insurance and linkage to care for mental health and substance use, secure housing, and employment opportunities, making it challenging for those living with HIV to receive and sustain treatment.

In April 2015, Gov. Cuomo endorsed the Ending the Epidemic Blueprint, consisting of 30 recommendations to achieve the governor's goals as well as seven "getting to zero" recommendations to reach zero new HIV infections, stigma, and AIDS deaths by 2020. I was proud to be a member of the task force of experts from around New York State that created the blueprint.

Just last month, the Governor made history again by pledging to include $200 million in additional state funding in his executive budget to fully implement blueprint recommendations.

Gov. Cuomo's budget commitment could go a long way to support our efforts to end HIV/AIDS here in New York City, allowing for expanded housing, transportation, and other critical services for our most vulnerable New Yorkers with HIV, as well as treatment and prevention strategies targeted to reach and retain those most in need. Amida Care serves people with HIV every day, and with stable housing and affordable care, our community members can live long and full lives.

We also know that better access to new prevention tools—including PrEP (pre-exposure prophylaxis), a daily pill that involves the use of anti-retroviral medication to prevent HIV transmission— has been shown to be over 90 percent effective.

Through our specialized model of care, we have already achieved a viral suppression rate approaching 75 percent among our HIV-positive members. Successes like these save lives and produce much-needed long-term health care savings. But we must continue to push further to end the AIDS epidemic.

It is crucial to ensure that Governor Cuomo's new $200 million allocation to end the HIV/AIDS epidemic in New York is fully supported in the final budget passed by the State Assembly and Senate. This wise public investment will improve HIV health outcomes and prevent thousands of new infections, saving both lives and billions of dollars in avoided health care costs.

With the governor's budget commitment, we will have the tools, a blueprint, and the resources needed to end our AIDS epidemic. The rest is up to us.

There is much work to be done in 2016. But together, by following the governor's leadership and continuing to take action, we can achieve an AIDS-free New York by 2020.

***
Doug Wirth is the president and CEO of Amida Care, a not-for-profit health plan that specializes in providing comprehensive health coverage and coordinated care to New Yorkers with chronic conditions, including HIV and behavioral health disorders.