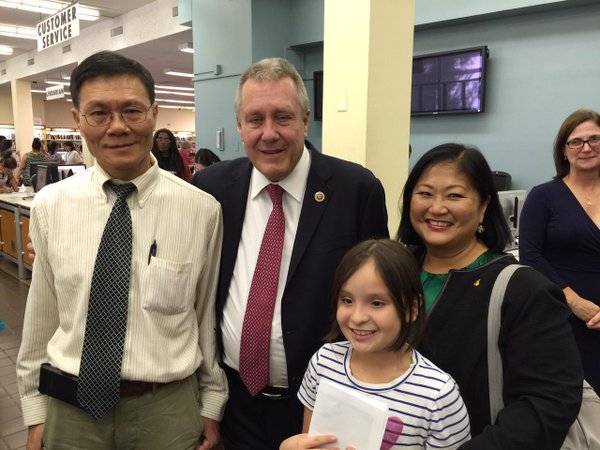 Council Member Dromm (middle), the author, at the Queens Library

Governor Andrew Cuomo's recently proposed budget plan for education is a mixed bag, but represents a major shift from his attacks on public education in years past. Ultimately, however, his plan falls short by allocating less than $1 billion in new education money this year at a time when public schools are still owed more than $4.4 billion in Campaign for Fiscal Equity (CFE) funding.

The CFE was a lawsuit brought by parents against the State of New York over a decade ago. These parents charged the State with failing to provide public school students with an adequate education. In 2006, the New York State Court of Appeals ruled in favor of the plaintiffs, finding the State in violation of a student's constitutional right to a "sound and basic education" by underfunding schools.

Nearly ten years later students have still not received the money due to them. The State still owes New York City a staggering $2 billion, leaving our public schools woefully underfunded.

Even the $1.3 billion school aid increase provided in the 2015-16 budget was not enough to restore the massive cuts our schools suffered earlier in the decade. Public schools in immigrant and low-income communities are particularly affected, most of which are owed over 77% of outstanding CFE dollars.

Just imagine the transformative impact a $4.4 billion dollar investment in public education would have on our children's lives. If adequately funded, schools would have the ability to hire additional teachers and school support personnel. Among other things, these sorely needed dollars would provide our students with a more robust physical education and help expand arts education in our schools. These CFE funds would bring about a dramatic reduction in class sizes in New York's most overcrowded school districts. The possibilities are endless.

Credit where credit is due: I am excited that the Governor sees the value of the community school model and recognizes how successful community schools have been in New York City. Supporting students holistically—by offering support groups and child daycare for parents, access to physical and mental healthcare, mentors for students and other valuable services—will make them successful in many ways.
The $100 million he has allocated for community schools is welcome news, but falls short of the $500 million needed considering that these schools have grown exponentially over the past year.

I am hopeful that the Governor's budget plan signifies a renewed interest in public education. But it's high time he settles this ten-year-old debt. New York State must deliver the entire $4.4 billion in CFE funding it owes in order to truly do right by our children. Their futures deserve no less.

***
Daniel Dromm is a City Council member from Queens and chair of the Council Committee on Education. On Twitter @Dromm25.