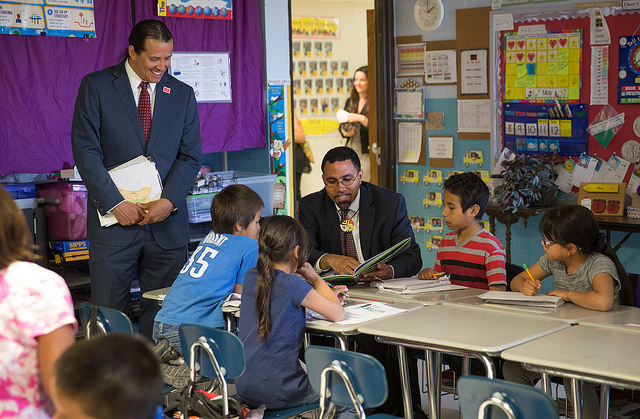 Educational civil rights in New York are once again front and center.

The Civil Rights Project at UCLA calls New York City the most segregated school district in the country.

Journalist Nikole Hannah-Jones in her award winning This American Life podcast, "The Problem We All Live With," documented the toxic racism embedded in Americans’ assumption of school district autonomy, no less a problem here.

All students should have the opportunity to attend integrated, well-resourced schools. Yet, instead of our leaders saying "the buck stops here" and meaning it, today's dime-store impostors continually pass the buck to those least able to tackle this crisis.

Ex-New York State Education Commissioner, now Secretary of Education John King is reported saying "local policymakers are the ones with the real power to integrate schools."

New New York Regents Chancellor Betty Rosa announced last week, regarding desegregation, that “I believe this is one that has to be done at the local level versus being mandated."

Most memorably, New York City Schools Chancellor Carmen Farina argued that desegregation should occur "organically" and more recently said not she, but community district superintendents and principals, should engage local real estate agents to solve the problem. "One of the things I’ve recommended to superintendents is have breakfast with your real estate agent, particularly the real-estate agents in the new developments going up,” she said at a community forum where she also suggested better school public relations might be a useful tool.

That these officials are a black male and two Latinas may mean civil rights don’t matter anymore. But the research cited by UCLA, Hannah-Jones, NPR, and other sources says otherwise. In yet another study on the long term effects of desegregation and school quality announced last Wednesday, researchers found court-ordered school desegregation did not affect outcomes for whites, it significantly improved the adult attainment of blacks born between 1950 and 1975.

King, Rosa, and Farina -- and their respective partners in perpetuating segregation: President Barack Obama, State Education Commissioner MaryEllen Elia, and Mayor Bill de Blasio -- seem to accept this in their statements. Civil rights do matter. They just don't want to tackle it. Too hot to handle.

But we in New York have an urgent need to face this problem and it won't be solved "organically" because it wasn't created organically. Segregation by race and class is baked into our atomized system of over 700 state school districts and the city's community school districts. Our schools are hard-wired for segregation. Our political system then doubles down on this geographic inequity by imposing an educational finance system that rewards haves over have nots.

No less than a complete upheaval of American public education will change these facts and their unacceptable consequences. But an important if partial fix is available to New Yorkers, modeled on the federal Office of Civil Rights. OCR, part of the U.S. Education Department with enforcement ties to the Department of Justice, takes citizen complaints and embarks on its own investigations to remedy individual instances of inequity. New York's State Education Department should create such an office, tied to the enforcement arm of the state Attorney General.

We all need this help.

***
David C. Bloomfield is Professor of Education Leadership, Law, and Policy at Brooklyn College and The CUNY Graduate Center. The third edition of his book, American Public Education Law, will be published this summer. He is on Twitter @BloomfieldDavid.