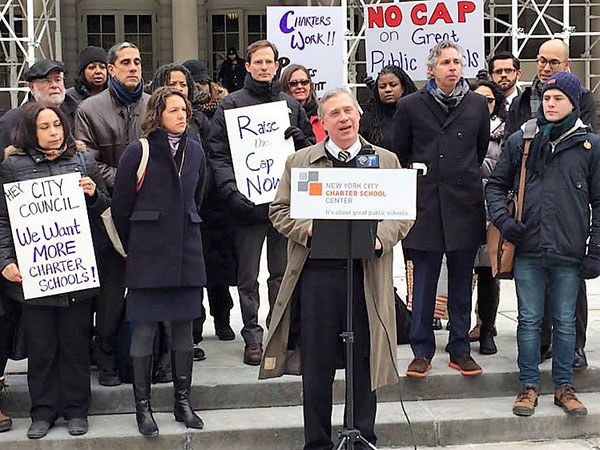 The New York City Independent Budget Office, the nonpartisan government watchdog, recently issued a report with some startling findings: Students in public charter schools will receive a lot less public funding and support this year than students in district schools. How much less? The IBO found that the gap started at $1,100 per student if the charter school is co-located in a public school building and shot up to nearly $5,000 if it isn’t.

And, the IBO found that the future is even grimmer—that gap will grow in 2017-18 and beyond as district expenditures rise by billions more a year.

None of this is a surprise to those in charter schools. For the past several years, they have watched as Mayor de Blasio poured millions into failing Renewal Schools, and increased the district’s budget to pay for raises for teachers. As a result, DOE’s budget has grown by 16% over the last three years while the amount that charter schools receive grew by only 3.7%.

That’s why this year the city’s public charter schools and the families they serve are united around getting more equitable funding. Proposals put forth by Governor Cuomo and the state Senate are a step in the right direction.

Apparently, though, simple fairness in funding between a child in a district school and a child in a charter school is an idea that UFT President Michael Mulgrew cannot stomach. That’s why the UFT is throwing everything it can at the wall to deny charter students more funding, hoping that people will ignore the IBO’s findings.

Unfortunately for the union, the report doesn’t stand up to basic scrutiny.

If you average $325 million across the city’s 216 charter schools, that means each school has roughly $1.5 million in the bank. It’s a pittance when you take into account that charter schools are organized as not-for-profits and best financial practice requires that they maintain three to six months of operating revenue as cash on hand. After all, a public charter school doesn’t have a dedicated tax base, can’t go to the bank (or state) and quickly access credit if they get hit with unexpected expenses like needing to fix a roof or put in a new boiler. That’s why so many schools prudently hold funds to plan for emergencies.

The UFT also ignores the fact that, unlike their district counterparts, charter schools have to find their own buildings where they can create new schools or expand. They don’t have multi-billion dollar capital budgets as does the city for its own schools. At the same time, the UFT has been pressuring Mayor de Blasio to squeeze public charter schools by refusing them space in district-owned buildings.

In other words, the UFT has done its darndest to create conditions that have caused charter schools to plan for a rainy day and then damned them for buying an umbrella.

These inconsistencies don’t surprise us, but they do become a distraction from the real story about New York City’s charter schools – that they are consistently among the best and most popular public schools in the state, particularly for disadvantaged African-American and Hispanic students. Not focusing on that is undoubtedly the UFT’s intention. But in the end we are confident lawmakers will make their budget decision on the merits, and here the facts are clear: charter schools aren’t receiving their fair share of funding. They, and the children they educate, deserve to. It’s that simple.