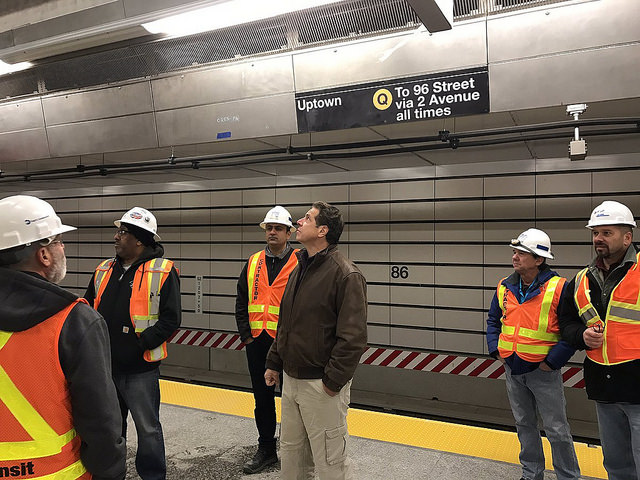 New York’s mass transit riders are experiencing a serious and rapid decline in service. The negatives are palpable and documentable; ever-worsening delays are aggravating and angering the millions of New Yorkers who need the subways, buses, and commuter rail systems to move them around.

Explanations for these serious problems include difficulties in loading and unloading passengers as the trains and platforms become more and more crowded, delays due to emergencies like sick passengers and police actions, the aging of the subway car fleet, and capital and maintenance work being conducted on the rights-of-way even as the trains are running.

The overcrowding is palpable and documentable too; ridership increased 58% between 1996 and 2016. Employment in New York City grew by more than 630,000 between the end of the recession in 2009 and the end of 2016, and is continuing to grow. New York City’s economy is successful, but its infrastructure is choking.

The MTA announced a six-point improvement plan in May, including adding EMS and other personnel directly placed at major stations to address emergencies more rapidly, accelerating subway car replacements, especially on the 8th Avenue Line, and increased track maintenance. These improvements sound hopeful but will take time. In part they are just about adding resources to the operations and maintenance budget.

Governor Cuomo nominated Joe Lhota, the former MTA Chair and Giuliani Deputy Mayor, to the Chair position again on June 21, and the State Senate confirmed him immediately. The Governor is also seeking governance changes. He has asked the Legislature to give him more seats on the MTA board to create an outright appointed majority of the seats for the Governor, as if he did not already have effective control. He is also proposing separating the Board Chair from the CEO to strengthen executive leadership.

The former Chair and CEO, the widely respected Thomas Prendergast, retired several months ago, and the Lhota appointment brings in someone of stature and competence. More than a decade ago, then Governor Pataki and the Legislature had combined the Board Chair and CEO positions for that same purpose, stronger leadership. While Lhota may be a positive choice, the notion that Governor Cuomo has not been in charge is ridiculous.

In a June 8 blog, “Cuomo Gave MTA Chump Change...,” I discussed how the Governor had allocated less than 5% to the MTA of a $9.9 billion windfall to the State from financial settlements with Wall Street bad guys due to pre-recession wrongdoing. Only $278 million is left unallocated; in addition, $1 billion is authorized for cash to the Javits Convention Center expansion. I pointed out that the hotel industry and the giant “New City” being developed in Hudson Yards offered ready-made alternatives for financing Javits, and the money might better be spent to help the straphangers.

Extra cash for critical operations, maintenance, and capital work won’t provide miraculous relief, but ought to help. Even getting these funds assumes Cuomo will step up to the plate but the record is pretty bad so far.

In the current $29.5 billion capital plan the State has committed $1.3 billion in identified resources, with an I.O.U. written in state law that the State will provide another $7 billion by 2025 or whenever the MTA runs out of current resources, meaning many years before the State has to come up with more money. This year Cuomo even reduced the State’s commitment in replacement funds to the MTA, authorized when the MTA lost revenue when its dedicated payroll tax was cut in 2011, by $67 million.

When Cuomo became Governor in 2011, both the State and the MTA were emerging from the financial crises that had confronted them during the recession. The 2010-14 MTA capital program, originally conceived at $32 billion, had been proposed in 2009 at $28 billion but scaled back to $26 billion that fall, with only two years of identified funding. As a last resort the MTA indicated it could borrow heavily.

In July 2011, the MTA, lacking large commitments from outside parties, scaled the capital program back further, to $24 billion, and would borrow $14.8 billion to provide the resources. The State would contribute a meager $770 million. The huge borrowing assured continued substantial fare hikes as the interest on the debts would be paid.

Fortunately, economic growth, improved ridership, and low interest rates allowed the transit system’s finances to stabilize for several years and fare and toll hikes dropped from 7.5% every two years to 4%. By 2014 the review process had begun for the new 2015-19 capital program, which once again was proposed at $32 billion, the same amount as had originally been contemplated for the 2010-14 program. Transit advocates proposed a new Round II version of Congestion Pricing, imposing tolls on the East River bridges and below 60th street in Manhattan, but lowering tolls on other city bridges, as a way to fund the capital program, but Governor Cuomo never supported it. Instead, his appointee to the MTA Capital Program Review Board vetoed the MTA’s $32 billion plan in October 2014.

It was 17 months before a plan would finally be adopted. Legislation submitted by my office to divert a tiny fraction of existing revenues from the personal income tax within the region to fund a large portions of the plan drew no response from the governor, even after Senate Republicans latched onto my proposal by linking funding for roads and bridges that would benefit their districts.

The recession was a financial catastrophe for the MTA, and was a factor in funding setbacks. Hurricane Sandy proved a physical catastrophe, causing major setbacks while repairs were made and are continuing, along with diverting much managerial attention. New York City’s substantial employment growth is a good thing but is straining the mass transit system. On the political front, Governor Cuomo has been a catastrophe for this huge state agency.