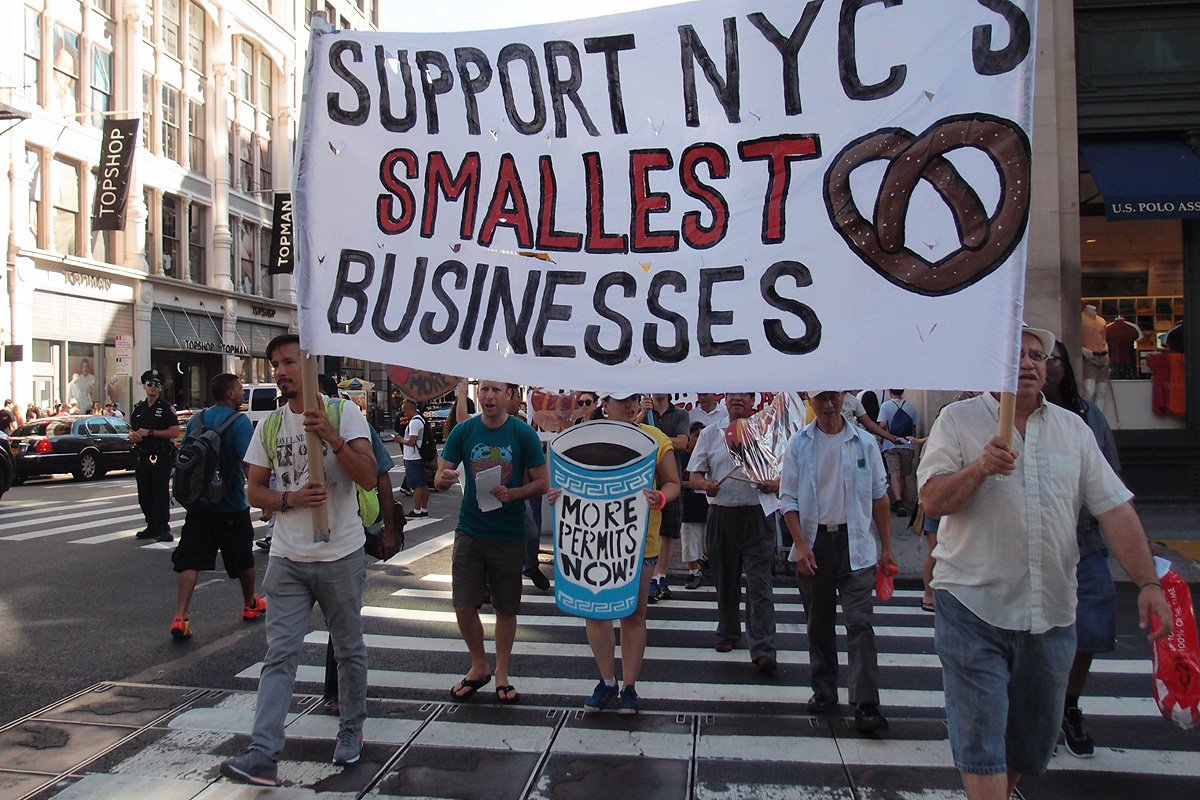 Independent small businesses -- bodegas, pizza joints, shoe repair shops, fruit vendors -- are the heart and soul of New York City. But they are facing a crisis. Every day there is another story about some beloved neighborhood shop closing due to skyrocketing rents. Landlords then warehouse the vacant spaces in hopes of signing a lease with a bank or big chain. WNYC recently counted 17 vacancies on just two blocks of Christopher Street. And a report by the Manhattan Borough President found almost 200 shuttered storefronts on Broadway alone.

What is Mayor de Blasio doing to fix this problem? Nothing.

When asked about it -- and he frequently is -- the mayor claims the government’s hands are tied because the “free enterprise” system alone controls what landlords do with their space. The mayor had no real comment on a package of reforms unveiled last week by USBnyc, a new citywide coalition of small business owners, most of them immigrant-owned. And a couple months ago, speaking to Tony Danza, actor and owner of a 125-year-old cheese shop in Little Italy, the mayor’s only solution to the problem was to “urge the landlords to be less greedy.” Good luck with that!

But, in fact, the city is not a passive observer - it actively supports large landlords to the detriment of small business owners. For years, the main priority of the city’s Department of Small Business Services has not been to help mom and pops, but to organize and support Business Improvement Districts, the somewhat mysterious, quasi-public organizations that exist across the city, from Montague Street in Brooklyn to Melrose in the Bronx, with more being created each year.

SBS spends more of its yearly budget fostering BIDs (what it calls “neighborhood development”) than it does supporting actual small businesses. Just last month, the city doled out $500,000 for BIDs to create mobile technology apps. And all that is apart from the millions in funding that BIDs receive each year from the City Council.

The BIDS have innocuous-sounding names like the 82nd Street Partnership and the Village Alliance. Their glossy annual reports invariably show smiling shopkeepers and kids frolicking in fountains. Usually they are structured to give some minority of votes to local commercial tenants or residents. But make no mistake: by law, BIDs are controlled by commercial real estate landlords. Their mission is to maximize the cash flow they receive from their valuable investments. If that means kicking out a 50-year-old beauty supply shop to replace it with an artisanal gelato chain, too bad. As Mayor de Blasio would say, that’s capitalism at work.

It’s true that New York neighborhoods are always in flux, and too much nostalgia can be dangerous. But it wasn’t always like this. BIDs have only existed in New York for about 30 years, since the Union Square Partnership was founded in 1984. With the city in financial distress, landlords sought permission to tax themselves to provide basic services, like sanitation and security, where the city was falling short. Who could refuse such an offer? Even as the city rebounded during the Giuliani and Bloomberg eras, the city pushed for BID expansion, boosting their number to 44 in 2002 and 73 today. And the trend continues under Mayor de Blasio, who blessed new BIDs in Springfield Gardens, Queens and New Dorp, on Staten Island.

But BIDs don’t just power-wash sidewalks and post security guards on the corner. They play an active role to advance the interests of real estate owners in shaping public policy. They attend Community Board meetings, hire lobbyists, and nurture relationships with elected officials. With a collective budget in the hundreds of millions, they have a powerful voice. For years, together with the Real Estate Board of New York, they have blocked the Small Business Jobs Survival Act, which would require landlords to sit down and talk with their commercial tenants before doubling or tripling their rent.

And, so far, the BIDs have stalled the Street Vendor Modernization Act. In October, no less than a dozen BID managers personally testified against the vending reform package in City Council chambers, while their lobbyists shook hands with officials in the hallway.

Everyone, of course, has a right to testify. But it’s time to have a public discussion about whether, as some have suggested, BIDs have outlived their usefulness. New Yorkers today are concerned about gentrification, not “white flight.” It’s time for a neutral study of whether BIDs lead to unfair distribution of basic services and the privatization of public space. And time to ask Mayor de Blasio why, if he cares about mom and pop small business owners, his administration continues to tip the scales in favor of the very same real estate companies that are driving them out.

***
Sean Basinski is director of the Street Vendor Project at the Urban Justice Center. On Twitter @SeanBasinski.