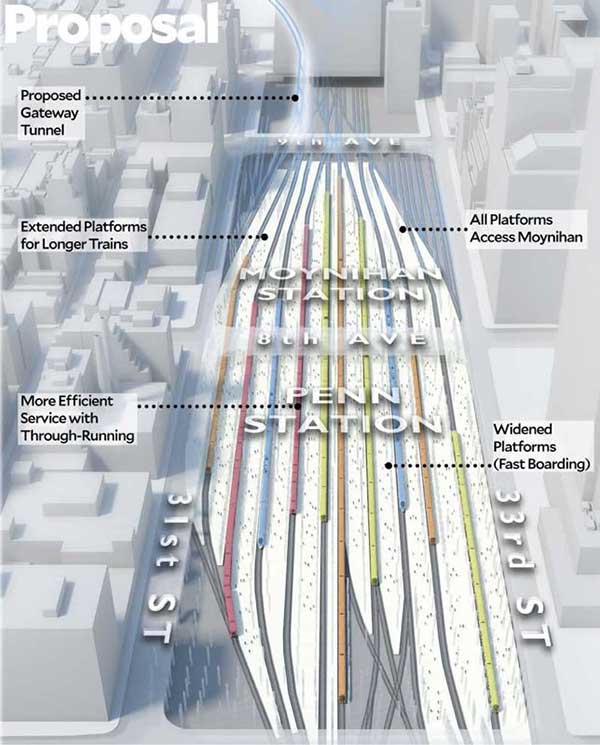 Unfortunately, those flaws are growing more obvious by the day. Narrow, crowded platforms and grossly inadequate stairs and escalators are a constant source of delays, dangerous overcrowding and frustration for commuters. But most importantly, Penn Station is not actually a station for most passengers – it’s a terminal. The difference is not merely semantic; in a terminal, trains must cross each other as they enter and leave, making it far less efficient than a through-running station. Even when this doesn’t cause delays, it severely limits capacity and ensures every train has to travel more slowly in Penn.

Twenty-five years ago, we could tolerate these inefficiencies, but passenger counts from Long Island and New Jersey have skyrocketed. Any major investment plan for Penn Station must be focused on solving the cause of commuters’ misery. Amtrak’s Gateway Program and the new Moynihan Station, if optimized, could do so.

Phase 1 of Gateway would add two new critically-needed tracks between Newark and Penn Station. Phase 2 of Gateway, though, includes a new terminal station—Penn Station South. This would require the demolition of an entire city block at a price tag of $8 billion to build another inefficient terminal, and do nothing to alleviate conditions in the existing station. Those funds are better spent on improving Penn and regional connectivity.

This alternate plan would remove the need for Penn Station South, provide additional economic opportunity for the entire region and the opportunity to invest in projects that create smoother and smarter commutes. Through-running is the key to unlocking the ReThinkNYC vision.   Highlights of that vision include:

New Yorkers once dreamed of, and then built, big projects. Now, in this post-Robert Moses, post-urban renewal era, planners are taught to think “politically” smaller. This approach has prevented us from addressing transportation systemically and holistically. It’s time to think big…again.

***
Jim Venturi is Principal and Founder of ReThink Studio. On Twitter @jimventuri and @RethinkNYCplan.