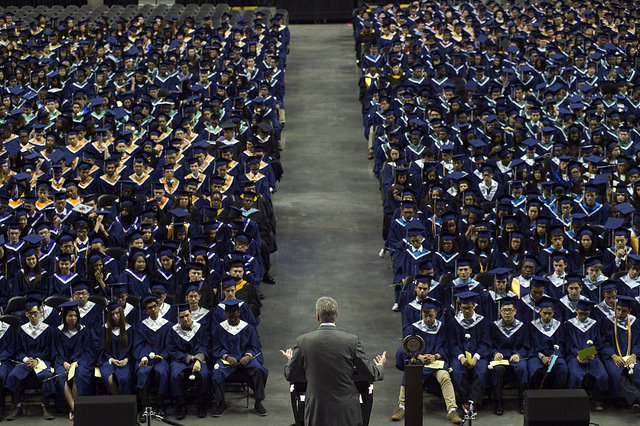 Well-regarded New York City schools are super, and they can do anything. At least that's what they seem to think over at Tweed, home of the Department of Education (DOE). That's why my school, Francis Lewis High School, has 4,683 students at my last count, more than ever, in a building designed for 2,400. We're seen as successful, so a lot of families want their kids to go there. Generally I've agreed, but it's getting to a point where I'm not sure.

I’ll admit outright that I’m partial to our school. I’ve been there 23 years and I’m one of its biggest cheerleaders. Nonetheless, our situation is far from unique. According to DOE data, 550,000 students, fully half of those in the city, are stuffed into overcrowded schools.

How bad is it? Last week I counted 101 oversized classes. That's better than the 268 I counted the first day, but hardly ideal. Ideal, and also mandated by union contract, by the way, is zero overcrowded classes. Every single teacher, as well as basic arithmetic, will tell you that the fewer students there are, the more attention individual teachers can give individual students.

With new students walking in each and every day, and enrolling in the school, I’m not ready to celebrate just yet. The whole process fills me with something not remotely resembling optimism. I’ve counted classes of over 40 students. The city already has the highest class sizes in the state. Thirty-four, becoming the standard rather than the exception these days, is tough. Over 40 borders on impossible for a mere human, and is no help whatsoever for struggling students.

We have two rooms that are converted closets. They have no windows. Inside are indoor air conditioners and HEPA filters designed to make them more bearable. In practice, the A/C units are so loud that they preclude instruction. Some teachers turn them off whenever conversation takes place. Via inertia, they tend to remain off all the time. On sweltering days they must border on torture chambers.

The principal, to his credit, has given up his conference room to be used as a classroom. There are mostly honors classes in there so as not to freak out teachers who have a thin wall with the principal sitting on the other side. It's not quite perfect, though, particularly when the classes are oversized. It’s tough enough handling normal classes in odd spaces.

For my part, I've given up office space as union chapter leader and won't be demanding it back any time soon. But that's a drop in the bucket.

It's tough to get up and down the stairs sometimes. No one pays attention to up and down staircases, no one ever has, and no one ever will. If the movement is up and you want to go down, you have to fight the crowd. Recently, for the first time ever, I had trouble leaving the building. The movement was from the trailers -- did I mention the trailers? -- to the building and I was going the other way. I decided to try to turn around but was too far in to do so. I was fortunate that some students decided to move out of the way and let me through.

We are slated to get an annex in two or three years, assuming the DOE works on schedule. That's a big assumption. After all, Bloomberg was going to get rid of trailers years ago. We'd be pretty much unable to function without them. Ours are going to go when the annex goes up, and there are 20 learning spaces slated for the annex. Assuming we lose the trailers and the two closets as classrooms, we'll have a net gain of 10 classrooms. Given the explosion of students we face, I’m no longer sure that will fix our issue.

One key point: the DOE doesn't cap neighborhood schools like ours. So if people come in from other neighborhoods, other states, or other countries, they can send their kids to our school. In fact, there are two huge Marriott hotels, not yet open, freshly constructed across the street. Anyone staying there long-term could place their kids with us.

Nine years ago the United Federation of Teachers (UFT), with the principals union, the DOE, and our School Leadership Team, was able to come up with a plan to stem enrollment. Over the last few years the city has ignored that plan, with increasingly negative results. Prospective students used to need something like an electric bill to show residency. Now they just need an affidavit, something that basically anyone could write. I don’t want to turn away district families that want to come to our school, but I’d like to maintain our school as a place those families want to come.

Just before we made our agreement with the city, when we were approaching the enrollment we now have, a reporter asked me what the breaking point was. I told her I didn’t know, but I never wanted to find out. Our agreement with the DOE enabled us to help make the number of students more closely suit the space in our building. A few years ago we had closer to 4,200 students with a goal of 3500.

I’m a lowly teacher, and I saw this coming. It’s time for the important folks at Tweed to stop twiddling their thumbs and start earning their hefty salaries. Maybe their offices would be better used as classrooms. Or maybe they could rent space for us in one of the Marriotts.

In fact, I’m told the city has a plan to reduce our enrollment by 100 students a year, beginning next year. That’s fine, but it’s too little too late. I don’t want to begrudge a single student a single place in a single school, but I also don’t want to find out what our breaking point is. I still don’t know what it is, and I still don’t want to know, but it doesn’t feel far off. If the city doesn’t want to know either, they’ll find us alternate space right now. Waiting is the worst idea and not an option.