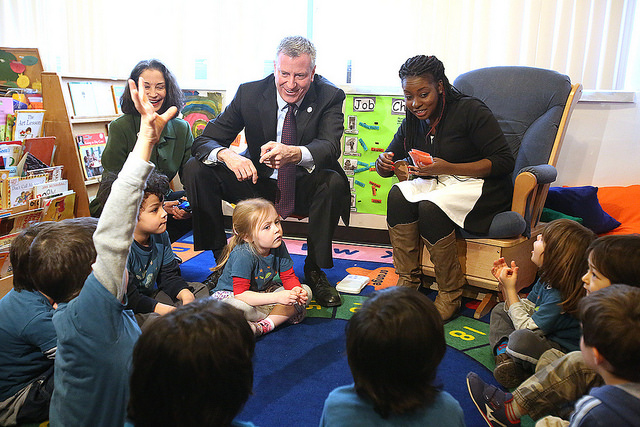 Every work day for the past nine school years, I have taught and learned with young people from stressed economic backgrounds as a New York City public school teacher. Every day, I confront the realities of a system that puts short-term profits over children’s well-being and the long-term health of our city’s families.

I see scars on adolescents whose parents were forced into a bind that Mayor de Blasio has described as “the impossible choice between bonding with their child and paying their bills.”

Scars on students whose parents were unable to take the time to bond with them because of economic pressures. On others whose parents did take time off, but now struggle even more to make ends meet. I see adolescent children fall behind their peers because they have to take on responsibilities at home providing childcare to infant family members so that their parents can rush back to work.

Harvard’s Center on the Developing Child confirms what those of us who work with young people know: “responsive relationships early in life are the most important factor in building sturdy brain architecture,” the neurological foundation for all future learning, behavior, and health. When parents do not have time to bond with new young ones in their lives we all suffer.

For too long, New York denied the children of all city employees access to the benefits that come from paid family leave for parent-child bonding.

Nearly two years ago, Mayor de Blasio publicly recognized the foolishness embedded in this system. He created and imposed on city managers a program that provides up to 12 weeks of paid family leave.

But that program penalized many managers with the loss of promised salary and vacation benefits. According to the city’s Independent Budget Office the program was not a cost to the city budget, rather it actually resulted in a savings to the city of close to $6 million. The mayor used his unilateral power to create a system where he got more than he gave up. That is not my understanding of how a “benefit” works.

In order to extend paid family leave to members of municipal labor unions, the city and unions must collectively bargain a new agreement. Teachers cannot sign on to the kind of one-sided plan that de Blasio instituted with managerial employees.

We know that governments can create family leave without breaking the bank. Cities across the country — including ones in the south and midwest that are not known for progressive social policy — have found ways to fund paid family leave policies for all city employees without going bankrupt. For example, Wake County, North Carolina funds the cost through the city budget.

We also know that negotiation means give and take. All of us understand the benefits of parental leave for children and families, but different teachers will have different understandings of the cost side. I’m a chapter leader in the UFT and I would love to have conversations about the appropriate costs of such a plan. We could have these conversations in our chapters and as a union if the mayor’s team would be up front about their calculations and requirements. But the team has provided none of these details publicly. I’m left to wonder if they are trying to accomplish the Mayor’s lofty goals without expending any resources to do so.

For 21 months, New York City has formally recognized the importance of paid family leave while accepting a policy that denies this benefit to our city’s educators and their children, as well as many thousands of other union employees and their families. Like a decision that restricts mail delivery for postal service workers, this hypocritical policy denies us what we provide to the rest of the city. The people who care for, educate, and support the young people of New York City should have the chance to care for, educate, and support our own children and families.

A good city takes care of the people who take care of it. We do this because it is the right thing to do, the right way to show value for the hard-working folks who make our city run. We also have a self-interest in providing services to city employees — services that make them more effective workers, services that make our city a more appealing place to live. Rather than treating teachers who want family leave like we are asking for a handout, the city should be partnering with us to find ways to support the youngest and most vulnerable of our city’s citizens without sacrificing the work we do. Rather than dragging its feet, the mayor’s team should use the political capital from his re-election to create a family leave policy for all employees.

In the mayor’s own words, “Paid parental leave means healthier and more financially stable families, more effective workplaces, and a stronger and more just city – which everyone can get behind.”

It’s time the administration got behind a real effort to create a parental leave program that works for everyone.