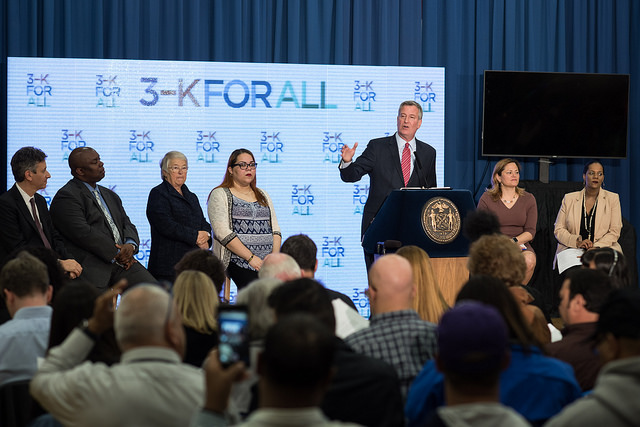 Lame duck chancellors now lead New York’s school and university systems. Governor Cuomo, who controls the CUNY board, and Mayor de Blasio, who appoints the schools chancellor, each show a shocking lack of urgency to fill these critical posts.

This is intolerable. Education is the driver of our information age. Social progress and economic prosperity depend on a vibrant public sector commitment. The city Department of Education enrolls a million children, pre-K through grade 12. CUNY enrolls 275,000 undergraduate and graduate students. Yet our elected leaders allow these essential institutions to remain rudderless.

Our schools and colleges should be brimming with excitement. New technologies, exploding fields of scientific endeavor, novel business opportunities, and a wealth of artistic media make this a particularly fertile time to teach and to learn. A new generation of education leaders is needed to meet this challenge, ready to bring vision and creativity to jobs that have become handmaidens to parochial political interests.

The leadership vacuum holds us back. New York’s position as the World’s Capital is threatened by educational backsliding and neglect. When Mayor de Blasio announced that Carmen Fariña’s successor would be cut from the same mold, my heart sank. Not that she’s been a bad chancellor but because we need a new chancellor, filled with original ideas and vision.

And who beside insiders even know the CUNY Chancellor’s name? James Milliken announced his departure three months ago after just three years on the job. His tenure has been marked by defending repeated charges of long-term fiscal mismanagement. Belated filling of vacancies on the CUNY board by Governor Cuomo and tensions surrounding appointment of City College’s new president added to system-wide stasis, a lost opportunity when Columbia, NYU, and Cornell’s new Roosevelt Island campus are all expanding.

Union leadership has been complicit in this lack of forward motion, settling into predictable cycles of management opposition and compliance for short-term interests. But Michael Mulgrew of the UFT and Barbara Bowen of PSC-CUNY, each safely ensconced in their positions, should do much more. New York labor leaders have historically been national figures, fighting tooth-and-nail for their members and the public good. Innovative contract terms can be an engines for implementing instructional progress if union sights are raised above routine salary demands.

Current belt-tightening by the federal, state, and city governments should not be an excuse for treading water. If anything, the budget picture requires increased institutional agility. Consolidation of organizational structures may be necessary, requiring different operational strategies. Principled reform of antiquated or unneeded functions can be catalyzed by cuts. Public officials’ well-known motto that “no serious crisis should go to waste” requires courage and consensus to implement. This is a challenge that requires new thinking, pointing again to the need for immediate change in the city’s top education posts.

This is a propitious moment for such change. With two ambitious politicians on the cusp of filling these leadership positions, a coordinated approach to New York City’s educational future is possible. Perhaps the Cuomo-de Blasio feud can find a moment of détente or realization that their mutual self-interest dictates summitry. With claims to being The Education Governor and The Education Mayor, the high-visibility appointment of quality chancellors for each of their fiefs will send a message of optimism and renewal that both can use to their advantage. Let us hope this flickering possibility can light our educational future.