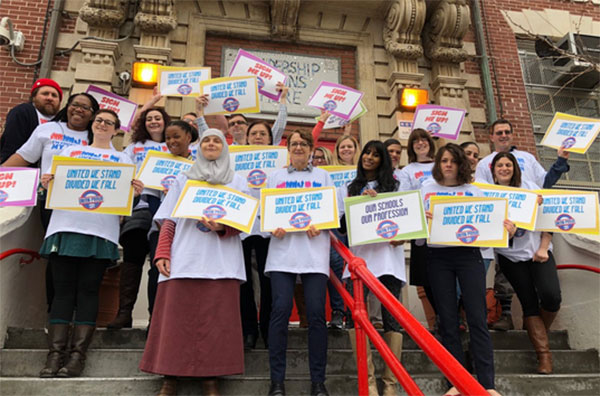 The Supreme Court of the United States will shortly rule on the Janus v. AFSCME case. Janus contends that any and all union activity is inherently political, that no one should have to contribute anything to union activity, and that we should therefore become a “right to work” nation. That’s an interesting concept.

My union, the United Federation of Teachers, has a political fund called COPE, and I contribute. I frequently disagree with UFT candidate endorsements and decisions, but I believe it’s important to empower our union. Not all of my friends believe that, but contributions to the political fund are strictly voluntary.

Union does, however, help press for things like higher pay, better working conditions, and increased benefits. We teachers and our union are frequently criticized for those demands. I see our working conditions as student learning conditions. I see our profession as a pathway to the middle class. At least two of my former students are now my colleagues, something I’m proud of. I think it’s our responsibility to leave our profession better for future generations. Of course, others may disagree with what we strive for.

It’s entirely possible there may be a class of teachers who want more work, less pay, and fewer benefits. A ruling for Janus, which would certainly weaken unions, could help achieve that. I’m UFT chapter leader at the largest school in Queens, and I represent Democrats, Republicans, and independents. I’ve never met a single member who wanted more work, less pay, and fewer benefits, but I don’t doubt they may exist. There are over 200,000 UFT members, and I don’t know them all.

Nonetheless, I’m fascinated by the concept that Americans ought not to be compelled to contribute toward political activity that, at least in theory, benefits them. If SCOTUS rules for Janus (and smart money says it will), then this “freedom” ought not to be limited to union activity. For example, like many Americans, I don’t want to pay for Donald Trump’s golf outings. Why, then, is my money covering those trips?

It’s entirely conceivable that Donald Trump may start a war to divert attention from the ever-rising tide of scandal that perpetually engulfs him. If he does, I’d rather not pay. If he ever builds that wall, I don’t want to pay for that either. I could go on.

I understand that, under the new Trump tax system, New York will be further picking up the tab for states that levy little or no income tax. Why should New Yorkers have to do that? If other states don’t wish to tax their citizens, it shouldn’t be up to us to build their roads or pay for their services. Maybe, like the union members who want more work for less pay, those states have residents who don’t want roads or services.  They should have the absolute right to live without them, and we ought not to get in their way.

Like a state or country, a union is a group of people who share an interest. Together we try to make things better for our group. We work together to advance our interests, and that’s why we have collective bargaining. I understand that, in a large union and in a democracy, I may not always agree with the direction in which we’re moving, but I have to do my part. And more broadly, I understand, as a citizen, that I have to do my part.

I freely acknowledge that our union may not be adequately representing the interests of teachers who want more work for less pay. I can understand that they may wish to opt out of union dues, even if doing so leaves them with more pay in the short run. (Call me cynical, but, if the SCOTUS ruling goes for Janus, I suspect some people who don’t want more work for less pay will also opt out just to save a few bucks.) The fact is that so-called right to work states have lower pay and fewer benefits, and that could become the norm after Janus.

However, if union activity is inherently political, so is government activity. If people are permitted to opt out of union dues, we ought to also be able to opt out of taxes. As soon as we can do that, I will consider supporting Janus.

But until that happens, everyone who benefits from a union should pay their fair share.