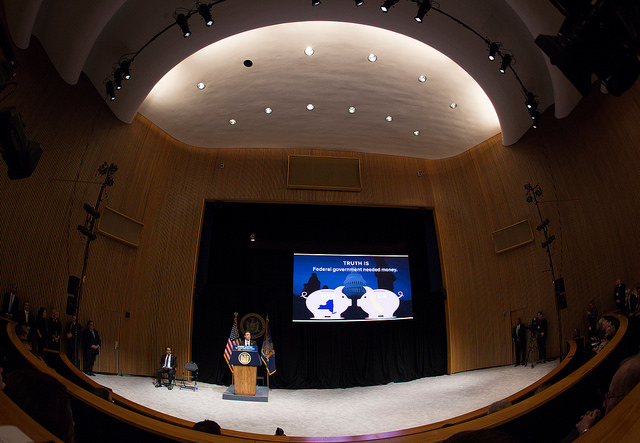 New York City and its economy have been growing at an extraordinary pace in recent years - it is quite clear that the city is generating jobs, development, and wealth. It continues to have major problems - affordable housing and homelessness crises, a deteriorated mass transit system, and nearly 20% of its population still trapped in poverty - but its overall economy has been growing.

This growth is occurring in the context of a set of perennial questions, both during state budget season when the allocation of resources across the state is decided every winter, and during campaign season, when most of the competitive legislative districts, especially for the State Senate this election year, are actually outside New York City.

Those questions are: What is the place of New York City in the state economy? Is the city a drain on the resources of the rest of the state’s residents, or a net contributor to the rest of the state? Should the city be forced to pay more to the state, or less? In the campaigns outside the city, a standard Republican refrain is to persuade voters to stick with the Republicans or lose power to “New York City Democrats,“ which presumably means there is a danger to out-of-city residents that more of their tax dollars will be spent on urban problems.

Ideally, of course, the state’s policies should allocate resources based on meeting the needs of all the people of the state in every region, rather than merely sending back equal amounts of money to the communities the dollars came from on the basis of how much they contributed in taxes. But one thing is true: the idea that New York City is a drain on the resources of the rest of the state’s regions and residents is absolutely not accurate.

The Rockefeller Institute of Government, a research institute affiliated with the State University of New York, in 2011 analyzed the basic question of where the money for New York State comes from by region, and where it is then spent by region, and confirmed that New York City is a net contributor to the state of New York as a whole. The data came from the State 2009-10 Fiscal Year, nine years ago. This article looks at trends since that time, but the evidence only shows that New York City residents and the city economy are providing an ever larger share of the State’s resources.

The City’s Status in 2009
The New York City economy’s strength in providing revenue to the state might seem intuitively obvious these days, but more surprising is that the Rockefeller Institute study showed that the city does not receive in spending its per capita share of the state’s population. As a member of the state Assembly at budget hearings over the years, I would listen to Republican state senators complain about the Medicaid program, and, guess what, they were right! Maybe not about the program’s overall value or burden, but about the fact that a lot of money in that program does go to New York City, which took 62% of the expenditure of the state-funds-only part of the Medicaid program. It was practically everything else that went the other way, with less funding to New York City and more elsewhere.

When you added in the state universities, the state prisons, and psychiatric hospitals, other state hospitals, the road, bridge, and highway spending, and even state aid to elementary and secondary education, the totality of the expenditures brought the city’s share of the state-funds-only budget to 40% of spending, while the city’s share of the population then was 42.9%, as pictured in this table from the study:

“Giving and Getting: Regional Distribution of Revenue & Spending in the NY State Budget, Fiscal Year 2009-10,” Rockefeller Institute of Government 2011

Local Assistance grants in the table above included both the Medicaid program and Aid to Education, revenue sharing, community colleges, and property tax relief spending (where the state gave school districts money in compensation for lost revenue from the STAR property tax exemptions for homeowners, where the districts lost funds). The average of all of the Local Assistance programs came to 49% for the city, but in two other large categories of spending, State agencies and State Capital Projects, the City amounted to less than one quarter of the spending, resulting in the overall 40% share.

The City’s Contribution to State Resources in 2009
The source of the state’s tax and other revenues, even in 2009, exceeded New York City’s per capita share of the state’s population, whether calculated from the residents of the city only, or the city as a place of work (Rockefeller study):

The city economy’s share of the state’s tax and other receipts in 2009 (48.7%) is partly explained by the large number of New Jersey, Connecticut, and other non-residents who work in the City and pay nonresident income taxes. About 14% of the state’s income taxes come from nonresidents. The city residents’ share of state revenues also exceeded its share of the population in 2009 (45.1 vs. 42.9), reflecting a combination of some very high-income and low-income taxpayers and residents. The city’s overall status in the state in terms of income and shares in 2009 is also reflected in this table:

New York City’s Status Today
The city’s economy is now providing a far higher share of state revenue than in 2009, during the national recession. I estimate the share based on residency now reaches 50%, and the share as a place of work reaches 53% or more.

According to the Assembly economic report, the city’s share of the state’s personal income was 46.6% in 2016, higher than the 44.9% in 2009. If the same proportion for resident revenue share and place of work share held from 2009 to 2016, the city share of state revenue rises to 46.8% as a place of residence, and 50.4% as a place of work. Personal income statistics do not include capital gains income, but it is a source of income tax revenue. Capital gains income was severely depressed in 2009 due to the recession. In 2018, several billion more dollars in income tax revenue from capital gains, heavily concentrated among wealthy New York City residents, has significantly increased New York City’s share of state revenue, above and beyond the general growth in jobs and income. The following table from the state Division of the Budget shows the impact of the recession:

The table shows the spectacular $84 billion drop in capital gains in New York between 2007 and 2009 -- from $118 to $33.9 billion -- and the Rockefeller Institute report data reflects the low level of tax revenue from that year.

What does that mean for New York City?

The New York City Economy Share of State Tax & Other Receipts Now Reaches 53% or More
I estimate that when New York’s tax rates on upper-income and super-wealthy taxpayers are applied to the extra $66 billion in capital gains income, the city’s share of total state revenue moves up two-and-a-half percentage points, reflecting about $2.5 billion more paid in income taxes from capital gains out of an additional roughly $4.5 billion in income taxes from capital gains paid statewide -- using $78 billion in receipts in 2009 and $106 billion in 2019 as the bases for the calculations. An extra two-and-a-half points bring the city’s share from 50.4% to about 53% of total revenue payments. The overall concentration of growth in New York City likely also brought in more sales tax, real estate transfer tax, and other revenue, bringing the share to more than 53% of state revenue, ten points higher than the city’s 43% share of the state population. On the resident side the share should be at least 50%.

The State Spending Side Today
On the spending side of the equation I don’t believe there are significant differences from 2009 in terms of percentages. There have been many changes in the ensuing years but they tend to cancel each other out.

New York City’s revenue sharing from the state, which was $246 million in 2009, was eliminated that year. The state enacted a new property tax relief program worth $1 billion a year that provides rebates exclusively outside New York City, in addition to the STAR program. Governor Cuomo and the Legislature agreed in 2012 to a 2% property tax increase cap for municipalities outside New York City, along with an agreement for the state to absorb all additional local government Medicaid expenses above their 2012 spending base, including New York City’s obligation. This freeze on local Medicaid spending had the effect of helping both the city and the counties outside the city in the same proportion as the overall regional expenditure for the Medicaid program. The city’s gain from the Medicaid freeze was offset by the loss of revenue sharing and the added property tax relief spending outside the city on a regional allocation basis.

In 2014 Mayor de Blasio sought and won a universal full-day prekindergarten program, worth $300 million a year from the state. But the money ended up incorporated in the city’s overall share of Aid to Education, which stayed at the same 39% of total aid from the state as it had been for years before that.

In 2016 the state approved a new Capital Spending program for the MTA, but the State Senate insisted on parity for Highway, Road, and Bridge spending, and a capital program of $27 billion for road and bridge work was adopted at the same time, most of which is spent outside the city. The state received more than $10 billion in funds from legal settlements with financial institutions related to recession-era wrongdoing, and applied large portions of the funds to upstate economic development and infrastructure projects.

The state also cut taxes extensively during the Cuomo years, including corporate, estate, and income taxes (a high rate was maintained on incomes now above $2.1 million per year), but these policies tended to concentrate tax payments into the upper income brackets and thus concentrate them in the city, as discussed above.

How these changes will affect future budgets is uncertain, but the facts are that the New York City economy keeps generating a larger share of state resources while the city does not receive an outsize proportion of state spending.