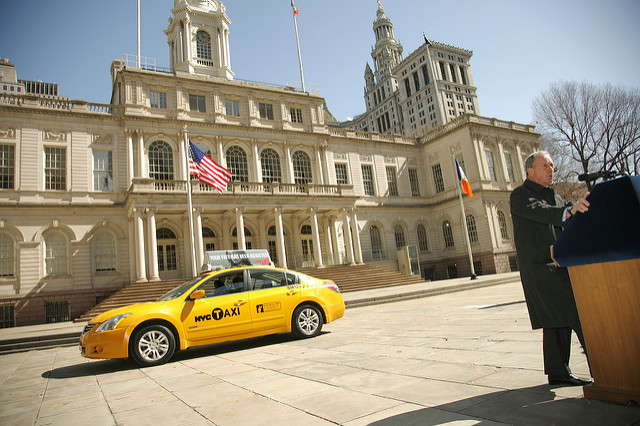 Smartphones are transforming transit in cities all over the world, and city governments are struggling to figure out how to best manage the change. If the world was looking to New York City’s recently enacted legislation affecting for-hire vehicle companies, then there will be disappointment given that, once again, the city’s political establishment decided to impose an outdated regulatory regime on innovative firms, making life harder for thousands of new taxi drivers while raising the price of rides for millions of New Yorkers and visitors to the city. The law, enacted this summer, caps the number of e-hail licenses in the city for a year and also enables the city to impose regulations on the type of compensation structures offered to drivers.

Who benefits? Politicians argue that it’s existing drivers who received their taxi registration before the one-year moratorium on new licenses was implemented, but if you think they’re the primary beneficiary then there’s a bridge in Brooklyn I’d like to sell you.

In reality, politicians got behind this legislation because they want to send a message to Silicon Valley, the startup community and their financiers: If you want access to the 8-plus million person New York City market, you’ll have to go through the local political class first, and that will cost you: in form of taxes, campaign contributions, lobbyists, and more.

True to form, the left and right have staked out their normal positions on this issue. For the left, it’s all about protecting the wages and rights of the less-than-10,000 existing drivers, even if that means higher costs for all New Yorkers and more obstacles for people who want to earn money by driving a car. For the right, it’s about protecting businesses and drivers from regulatory controls that will raise prices for consumers, even if that means facilitating the big business takeover of an industry that has been a source of wealth for independent individuals and small businesses in New York City for a century.

Like many issues involving new technology, we need to look beyond the left-wing or right-wing way to manage these technologies, and instead look to the “open source way.”

What do we want? Safe, convenient rides, with low prices for riders, high income for drivers, positive impacts on traffic, and data protection for everyone involved.

The best way to achieve these ends isn’t complex licensure regimes, quotas on new taxis, or putting more surveillance technologies in our cars or on our streets. Instead, New York City should do for its local cab industry the same thing successful industries do for themselves: standardize how information is formatted and exchanged between systems. This makes it possible for information from one app, like Uber, to be read, understood and interacted with by another app, like Lyft or Google Maps.

Making ride-hailing data more standardized and interoperable will have a number of benefits.

First, it aggregates supply and demand, which increases competition in the taxi market leading to lower prices for riders and more business for drivers.

Second, it gives riders and drivers more options, allowing them to use an app with the mission of benefiting New Yorkers instead of benefiting investors in giant tech corporations.

Third, it mitigates a threat many people fear: that Uber, Lyft, and other venture-backed ride-sharing apps are subsidizing their own cab rides to undermine the legacy taxi industry, and then once the legacy industry is dead, they’ll jack up prices. That strategy won’t work if New York City is committed to maintaining a system of its own.

The idea of establishing a “ride sharing” (or “e-hail”) standard isn’t new. It has been discussed and proposed by a number of people in New York City’s tech community for years, including Ben Kallos, a tech-aware City Council member who proposed it in a 2014 bill, and by Chris Whong, now the lead developer of NYC Planning Labs, who proposed it in a 2013 blog post.

Critics of this approach have claimed that the city doesn’t have the capacity to develop its own e-hailing systems, but that simply isn’t true. Generic apps similar to Lyft and Uber exist in hundreds of markets around the world. Even local cab companies in New York City have developed their own apps.

Creating an e-hailing system for New York City would likely involve a three-step process: (a) develop a “ride sharing data standards” body that would bring riders, drivers, city agencies, and app developers together to create specifications for how all taxi-hailing information should be formatted and exchanged; (b) develop and operate a basic, open source e-hail smartphone application that would use these data standards to, like any one of the dozens of ride-hailing apps available around the world, allow New Yorkers to request rides and drivers to fulfill those requests; and (c) create a city-administered server that not only processes information from the current city taxi app but also allows other ride-sharing apps to exchange their information with the server.

This approach leverages the city’s considerable influence to produce a number of benefits:

By following established best practices from government digital service organizations and open source communities, this system could be produced quickly and inexpensively. And by open-sourcing an app and inviting other cities to use and modify the New York City code, we could join a small but growing community of cities around the world developing and sharing open source software (such as Madrid’s Consul project) that enables them to provide government services faster, better, cheaper, and in a more ethical manner.

The original meaning of “regulation” wasn’t the levying of taxes and fees to penalize innovation -- it was to “make regular” through the implementation of transparent business practices and the adoption of standard operating procedures. That is precisely what New York City should be doing, and it can do so by modelling best practice behavior that challenges Silicon Valley (and its New York-based counterparts) to produce better products, for lower prices, in more responsible ways, with more respect for the rights of their users.

Any municipality can throw rocks at Silicon Valley by imposing taxes and creating obstacles to market entry, but few have the capacity and scale to challenge Silicon Valley by creating innovative products. New York City has that ability. Let’s use it.