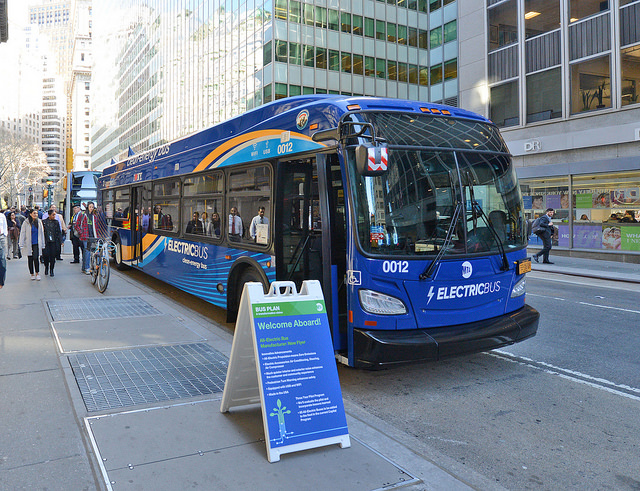 Bus Ridership in New York City is on the decline despite innovations such as Select Bus Service (SBS). Newly appointed New York City Transit (NYCT) President Andy Byford’s Fast Forward plan will not reverse this trend unless its focus is changed to make it more passenger friendly.

The plan states (page 34) that the bus route network will be redesigned within three years “based on customer needs through a process of customer consultation and analysis of travel patterns.” NYCT will also “Rationalize bus stops in consultation with local communities and the NYC Department of Transportation to reduce travel times, including eliminating under-utilized stops and consolidating closely-spaced bus stops” (there is no definition of “closely spaced”).

There are several priorities NYCT must have in undertaking this work, and lessons that can be learned from past planning.

Warning Signs and Inclusive Planning
If the recent elimination of 25 Q22 bus stops in the Rockaways is any indication, walking distances to bus stops will be a half-mile or more in some cases. Also, those changes were opposed by the community, but implemented anyway (and there was massive confusion afterward due to inadequate notice). So, what does Byford mean that changes will involve community consultation?

Bus stop removal does not necessarily speed buses. The Q22 averaged 15 mph west of Beach 116 Street.  There was no need for these buses to travel faster. Further, since the eliminated stops were very lightly used, most of them were usually skipped anyway, so no meaningful time was saved by eliminating them, but total travel time for travelers was increased due to extra walking and a greater likelihood of missing the bus. Saving a few minutes on the bus due to fewer stops is not an improvement when those minutes are instead spent walking extra to and from the bus, and it may even increase trip time.

Longer walking distances disproportionately harm the elderly, handicapped, those with temporary injuries, e.g. those on crutches, or have health issues such as sciatica which makes walking exceedingly painful. Fewer bus stops can also be categorized as a cut in service.

People carrying packages, women accompanied by small children, or lugging shopping carts, pushing baby carriages, or pulling suitcases are also not willing to walk long distances. Weather is also a factor.  Most would not want to walk half a mile in a snowstorm or pouring rain to get to a bus stop. When there is a choice between the bus and train, many choose the bus because they cannot walk stairs.

Bottom line: Planning should not be done by only considering able-bodied riders on good weather days.

Why is Bus Ridership Declining?
There are many reasons. The city Comptroller says its due in part to a fractured management system. Buses are often late, slow, and otherwise unreliable and sometimes overcrowded, and some routes do not take passengers where they want to go. They often involve indirect travel and one or more transfers requiring long waits. Alternatives do exist besides driving, and bus riders are increasingly switching to them. There is walking and cycling, taxis, car services and app-based services like Uber, indirect subways, and of course the decision not to make discretionary trips.

Riders want as much direct service as possible and are willing to tolerate one bus transfer except when service is very infrequent. Two transfers usually involve an extra fare for those without unlimited passes, another system deterrent. Passes do not make sense for those who cannot afford them and those who use the system less than five days a week, such as many college students. Approximately half the passengers do not have unlimited passes. Total trip time, personal safety, and cost are the primary factors determining mode of travel. Yet the MTA does not measure total trip time. It is more concerned with time spent on the bus and increasing average bus speed. Any plan which necessitates additional transfers will fail.

How Do We Reverse the Trend 0f Declining Ridership?
We can look at what has already worked for clues.

November 12, 2018 marks the 40th anniversary of the southwest Brooklyn bus re-routings, which I designed at the Department of City Planning (DCP). We studied eight interlinked bus routes and redesigned them to improve their effectiveness.

Most notably, we proposed a new 86th Street bus route (designated as the B86) replacing four separate routes that covered different portions of the street. The old routings caused unnecessary complexity making the bus system difficult to use. Three transfers and multiple fares were required to travel between Bay Ridge to Manhattan Beach. Four or five buses were required from Bay Ridge to Brighton Beach.

Rather than using such a cumbersome bus system, mass transit travel between those neighborhoods usually involved three indirect subways via downtown Brooklyn. That was replaced by making many more one and two-bus trips possible. A portion of that proposal was accepted and the new route was designated the B1. Today, the B1 has good frequencies and is the seventh most-heavily utilized route in the borough. The routes it replaced were all moderately or lightly used with poor frequencies. Service gaps were filled and connections were vastly improved.

Redesigning the City’s Bus Routes
The Fast Forward plan to redesign the city's bus routes within three years is a necessary and monumental task. Will this redesign result in increased ridership? It is difficult to tell because few details have been released.

We know routes will be straighter, with fewer bus stops. There also will probably be fewer routes since one of the goals is to eliminate what is considered duplicative route segments. What is really duplicative? Are two routes operating on the same street serving different destinations duplicative? Is a bus on the same street as a subway duplicative or do they serve different purposes? Will eliminating one of them increase the number of transfers that are necessary to complete a trip? These questions need answers.

Operating costs appear to be the prime factor in determining the MTA's decision for how to restructure bus routes and bus stops. The single goal appears to be to have buses operate faster to reduce operating costs. In that regard, during the past decade, the MTA has converted many revenue miles into non-revenue miles for partial trips to and from depots because they regard non-revenue miles as more productive and efficient than miles where passengers are carried. Some buses even make entire trips not in service.

Bottom line: If the needs of the passenger are not the primary focus, the bus route redesign will fail to increase ridership and most likely will result greater ridership declines.

That is not to say that every bus stop is needed and no portions of routes can be eliminated successfully. Operating costs must of course be a consideration, but not the primary one. Improving reliability, reducing crowding, passenger total trip times, and transferring must be prime areas of focus.

Increased reliability can be accomplished by maintaining long routes but scheduling more service appropriate to the demand. This can in part be done by having many buses not operating end to end, but serving only the areas of the route with the highest ridership, more closely matching service to demand.

Shorter trips increase reliability because a delay at one end of the route will not affect all buses throughout the entire route. Merely splitting very long routes in half, as the MTA has done, greatly increases the need to transfer and reduces the amount of direct travel. It is better to split very long routes so that there is some overlap.

The personnel in charge of reliability should be adequate and dispatchers need to be properly trained. Bus schedules should also reflect realistic road conditions. Some bus operators have complained that some trips can routinely take them nearly twice the allotted schedule which means that all scheduled trips are not provided.

Creating exclusive bus lanes with little enforcement has not significantly improved bus reliability according to city Comptroller Scott Stringer’s office. These lanes have slowed down other traffic in many cases, increasing trip times for those not in buses, a factor the MTA and the Department of Transportation (DOT) have been ignoring.

The MTA must realize that increased service results in increased ridership and not believe the two are unrelated. The 2010 massive service cuts assumed there are alternatives for every eliminated route and route segment, and that ridership will not decrease. Ridership, of course, did decrease.

Bottom line: The MTA must be willing to invest in service enhancements to reverse the trend of declining bus ridership and not continue to insist that all changes to bus routes be cost neutral with no examination of latent demand.

Service is not planned with latent demand in mind but only for existing riders. The assumption is that increased service will not improve ridership. Operating costs and current patronage should not be the only variables in the decision whether or not to increase service.

Service gaps must be filled with an emphasis on reducing the need for transferring. In order to understand how to do this, in part 2 of this series, I examine the southwest Brooklyn changes more closely and compare them to past MTA studies that have not achieved their desired results. And part 3 of 3 will discuss routing changes that are still needed for Brooklyn and discuss measures to reverse the decline in bus ridership.