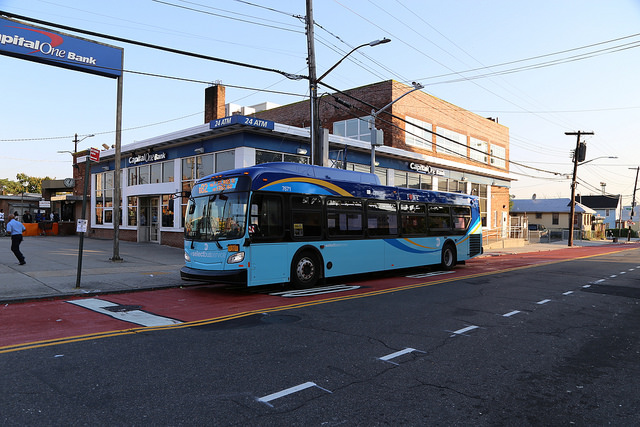 (photo via NYC Department of Transportation)

This is the second part of a 3-part series. Part 1 discussed the causes for bus ridership decline, the Fast Forward Plan as it relates to buses and why its focus needs to be changed to reverse this decline. In this part: measures that have worked in the past.

The Southwest Brooklyn Changes of 1978
No other group of bus route improvements were that comprehensive. The 1978 changes also differed from others in that they were not initiated by the MTA, but by the New York City Department of City Planning (DCP). It was the only time another agency suggested bus route changes to the MTA; all other route changes originated in-house. I authored the DCP route changes and headed the study, which took four years due to the MTA throwing up roadblocks. First, MTA reps suggested we expand the study’s scope; then they claimed the scope was too large, making the changes infeasible.

In the end, about 25 percent of the proposals became reality after a lawsuit by the Natural Resources Defense Council included a provision requiring the MTA to take actions in southern Brooklyn to alter bus routes to improve air quality in Manhattan per the 1970 Clean Air Act.

DCP met with community boards before and during the study to solicit bus problems and to describe both the positives and negatives of the proposal. That approach resulted in approval by three boards with the other three boards, which were least-affected, taking a neutral position. No board objected.

By contrast, all presentations of MTA studies provide limited facts, omit the negatives, and community recommendations are only considered when massive numbers support or oppose a change. That results in opposition to all MTA bus changes. The southwest Brooklyn changes went virtually unnoticed by the media because the last citywide newspaper strike occurred in the autumn of 1978.

What the Southwest Brooklyn Changes Did Not Accomplish
As complex and successful as it was, three-quarters of the proposal was rejected. It also recommended the meandering B16 serving Fort Hamilton Parkway and 13th Avenue be split into two direct routes along each of those streets to better serve Maimonides Medical Center and make bus transferring more direct. This important traffic generator has only one east-west bus route serving it and an elevated line over a quarter-mile away. The B16 would have passed directly in front of the hospital, greatly improving accessibility.

Outdated bus routes are a problem throughout the city.

Some routes were never properly designed when they were created. According to The New York Times, when the U shaped B21 was created in 1946 (then named the 21) from the combination of two other routes, there was a protest outside Coney Island Hospital that the route did not meet the needs of the community. Yet it remained in place for over 30 years until it was discontinued as part of the 1978 southwest Brooklyn changes.

It proved that comprehensive studies can work, something the MTA refuted, because its studies failed, until a few years ago when it undertook a northeastern Queens bus study at the insistence of local elected officials. Recent support of comprehensive studies by the Bus Turnaround Coalition also led the MTA to rethink its piecemeal rerouting approach.

The DCP southwest Brooklyn study cost only $250,000. The MTA spent well over $20 million on its bus route studies and has little to show for them. Only a Bronx study in the mid-1980s and the northeast Queens study resulted in a few meaningful bus route changes. The MTA also mixes good and bad ideas in its plans with too much of a focus on reducing operating costs and too little emphasis on improving service.

Examples are a service extension in Brooklyn around 2001 to the Gateway shopping center, which was combined with a route cutback in Ridgewood in order to save a single bus. Similarly, an improvement combining service on the two portions of Ralph Avenue also was coupled with a cutback in service on St. John's Place to keep costs neutral. That created a new service gap and reduced accessibility. The approach to mix good with bad ensures opposition to MTA plans.

Unwillingness to invest in providing additional bus miles to attract new patronage has partially been the reason for ridership declines. The MTA has long-insisted that bus route changes be cost neutral with the exception of the SBS program. In recent years, service in developing neighborhoods has been addressed by the creation of shuttle routes or extensions operating every 30 minutes without consideration of the rest of the bus system; those routes have not performed well. A B67 extension caused additional routing problems by terminating a few blocks from a major transportation terminal, hindering transferring, also to save a single bus.

In other words, if you make sensible proposals that do not needlessly hurt communities and are honest with them by telling them the entire story — the positives as well as the negatives, as DCP did — they will support your plan. Conflicting and partial information, refusing to compromise as in the northeast Bronx study, and refusing to respond to questions, as with the SBS program, will result in opposition.

This is part 2 of a 3-part series. Read part 1 here. The final part discusses routing changes that are still needed in Brooklyn and what needs to be changed in the Fast Forward plan.