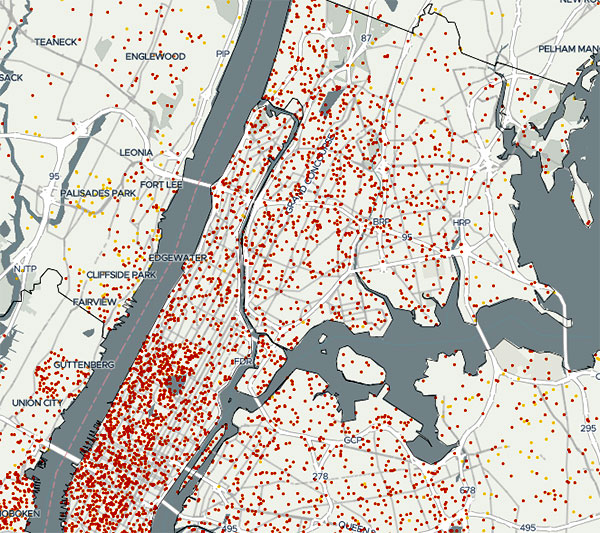 New York City and its neighbors have a problem. Unlike Los Angeles, Chicago, and the other major U.S. metropolitan areas that fit neatly within the standard city, county, and state political boundaries, our metropolitan area of over 22 million people does not. We’re spread out over four states and 26 counties, five of which are called “boroughs” and were integrated together to create our city over 100 years ago.

All these complex boundaries and jurisdictions have resulted in a metropolitan area that has been “divided and conquered” by the politics of patronage, enabling networks of political insiders and special interest groups to dominate New York City’s electorate, advancing their own interests at the expense of ours. This has resulted in our area’s city and state governments passing higher taxes and providing lower quality services, more corruption, and less infrastructure investment than comparable cities and regions around the world.

People living in the New York Metropolitan Area (NYMETA) might live over 100 miles apart, but we still work at the same jobs and in the same industries, go to many of the same universities and hospitals, and root for (or at least have strong opinions about) the same sports teams. We often travel the same roads, ride the same train lines, use the same airports, drink from some of the same aquifers, eat the same foods, and get rained on from the same clouds.

With so much shared environment and infrastructure, you’d think that there would be powerful entities helping us align our shared interests, coordinate our actions, and deliver us results at a regional scale. Unfortunately, that isn’t happening.

There is no single entity or group responsible for systematic coordination within our metropolitan area. Instead, we have a hodgepodge of coordinating bodies spanning different sectors, areas and functions. Sometimes those bodies are prestigious nonprofit entities with relatively meager budgets like the Regional Planning Association, other times they’re multi-state authorities with huge budgets run by political elites like the Port Authority, and often it’s informal coordinating bodies that do little more than network individuals and hold annual meetings, and most commonly, there is just no coordination taking place at all.

What types of opportunities could a better coordinated region be generating? Here are some examples.

We’re experiencing a housing crunch in New York City, and there are a myriad of housing development opportunities in the Hudson River Valley and tons of New Yorkers who’d happily commute from a high rise in Poughkeepsie to a job in Midtown Manhattan if the commute could be done in under two hours and for a reasonable price. A coordinating body -- let’s call it NYMETA -- would be responsible for bringing all the players together: Metro North Railroad, town governments, real estate developers, and New York City to streamline regulatory processes, align incentives, and get deals made and buildings built.

Another example: New York City schools are feeding over a million kids a day, our regions small farms are looking for reliable consumers of their products, and the school system is looking for locally sourced healthy food, but their corporate contractors are trucking in frozen produce from hundreds of miles away. The city is also building programs that expose youth to nature, rural communities, and agricultural-based industries. NYMETA could work with rural counties to help them aggregate and organize food supply, and work with New York City to aggregate and organize school demand, and then build the relationships needed to get our kids eating healthy local food and empowering our regional farmers at the same time.

Beyond managing classic coordination challenges like road and rail linkages, we also need an entity that can represent our region on the national and global stages, where major cities and their regions are playing an increasingly important role in global affairs. Many leaders, including major CEOs, politicians, philanthropists, philosophers, and futurists have predicted that, over the course of the 21st century, nation-states will cede more and more political power to cities and metro-regional governments, and those governments will network together to coordinate policies at global scale.

Evidence of the rise this “municipalist” power structure is everywhere, from the United Nations HABITAT conference that brought cities together through the U.N. structure for the very first time in 2016, to various networks of city governments like the League of Cities and Networks of Cities, and through outcomes like the C40 process to tackle global warming. Places like Paris and Los Angeles have, through the luck of sensible political boundaries, entities that can, to some extent, represent their metro region at these events. NYMETA could perform this function for us, enabling our region to leverage our massive population and other resources when negotiating agreements and deals with other major global regions, not to mention what could be done within the U.S.

An important step towards any political organizing project is collecting and displaying the most basic information about geography and demographics. Who would fall within a metro regional government? What would its boundaries be? The new Metro Region Explorer website from New York City’s premier digital service organization, NYC Planning Labs, answers these questions with an open source software tool that mashes a bunch of datasets about our metro region together to provide data-driven stories about demographics, employment, housing, and other baseline statistics needed to understand our region.

Unlike many GIS tools with lots of confusing check boxes that you need to click off and on to get useful information, Metro Region Explorer does the work for you by giving you some stories you can toggle through and menu items that reveal the most important data. Click around the site and insights will likely pop into your head as they did mine: New Jersey is building tons of housing while western Nassau and eastern Westchester counties aren’t. Lots of jobs are moving out of Connecticut and into New York City and Long Island. Central Jersey has a huge immigrant population. Wow. 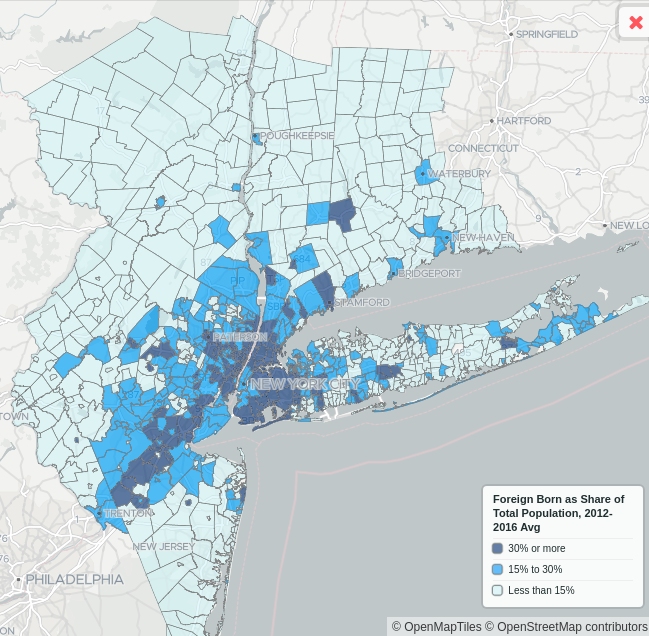 Metro Explorer isn’t just a cool mapping tool for planning nerds. As Gotham Gazette reported in its article “With New Data, City Takes First Step Toward Regional Planning,” its development indicates that the city is getting serious about improving our region’s capacity to understand itself and coordinate between and among jurisdictions.

As the largest government with the most capacity in the region, it’s up to New York City to begin the process of developing a more integrated regional coordinating body. But building a dedicated office to do this work is not enough. We need an entity accountable to the 22 million people, 900 municipalities, and 26 counties of NYMETA. Developing such an entity will produce tangible benefits in the short term and create a whole new set of opportunities over the long term.