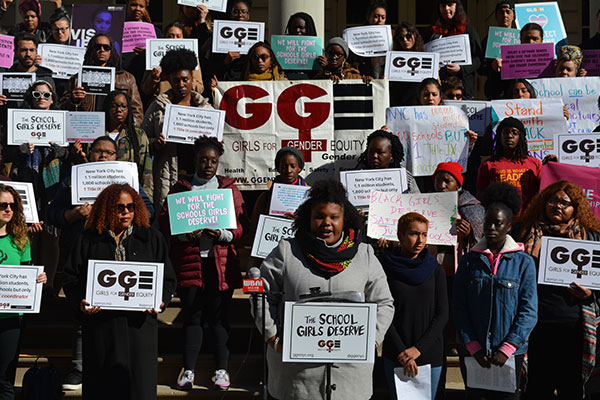 What does the school girls deserve look like? At Girls for Gender Equity (GGE), we know cis and trans girls - and gender non-conforming youth - should go to schools that are safe places to learn, grow, and thrive. Yet, the New York City Department of Education (DOE) continues to let us down, and doing so at a time where the current presidential administration is diligently working against what needs to be done to create those institutions.

In a participatory action research project we conducted in 2017, one in three students in New York City schools reported having experienced some form of sexual harassment. Further, one in two students shared with us that they felt their gender expression and identity was being unfairly restricted by their schools.

Both of these issues can have a tremendous impact on student outcomes, with certain populations being more vulnerable than others. As Dr. Monique Morris documented in Pushout: The Criminalization of Black Girls in Schools, black girls across the country face disproportionate and often overlooked barriers to their education and they “have become the fastest growing population to experience school suspensions and expulsions, establishing them as clear targets of punitive school discipline.”

Among those being punished? Victims of sexual violence at home and/or at school that are disciplined for ‘acting out’ in the classroom instead of receiving the support that they need to heal and young women who are punished for dress code violations due to their body type.

School is far too often a hostile space for youth that so urgently need to be welcomed and affirmed there; hostility that leads to suspensions, expulsions, arrests, and even imprisonment for some of our most vulnerable young people.

In 2016, GGE organizers, youth development experts, and young people themselves contributed to a participatory action research project focused on the disproportionate impact of gender and racially biased policies on cis and trans girls and gender non-conforming youth of color in the DOE, which is the country’s largest school district.

This work resulted in The School Girls Deserve (SGD) report, depicting the unique ways school pushout and discipline disproportionately impacts girls and TGNC youth of color. This report included 45 recommendations for New York City to improve its policies, addressing gender-specific realities that young people experience rooted in a racial and gender justice lens. We are calling on the city to take action on two of those recommendations.

First, we’re looking to the DOE to ensure equal protection for young people in public schools through the enhancement of Title IX, the civil rights law designed to prohibit sex discrimination in educational institutions that receive federal funding. The New York City DOE operates 1,800 public schools with a total student population of 1.1 million -- but employs just one Title IX Coordinator to support them. GGE is calling for trained Title IX Coordinators in each of the 7 DOE Field Support Offices.

Second, we’re calling for a citywide dress code that celebrates diverse cultures, body diversity, and gender expression. Girls of color and TGNC youth are disproportionately disciplined for what they wear to school. Yet, the DOE does not currently have a universal dress code policy. Girls and TGNC youth report missing out on class time because of discriminatory dress codes and unfair enforcement. Both informal and formal classroom removals cause girls and TGNC youth to lose out on opportunity to learn. GGE will work with the DOE to develop an affirming, inclusive school dress code, ensuring that schools are supportive and welcoming for all young people.

As we are fighting to see Title IX used more effectively, federal Education Secretary Betsy DeVos is looking to limit its ability to protect survivors of sexual violence. She recently unveiled a series of devastating proposed regulations that would remove Title IX protections from off-campus and online sexual harassment, as well as incidents of harassment that do not result in a student missing classes or dropping out entirely, give schools the ability to claim religious exemption from adhering to anti-sex discrimination policy, and limit investigations of abuse or harassment to cases that are reported to a Title IX official -- again, remember that New York City has just one person in such a position serving 1.1 million students and their families. Earlier this year, DeVos announced plans to remove protections for transgender students from Title IX.

This isn’t the first time - at the federal level, this administration has repeatedly demonstrated its blatant disregard for girls, women, and TGNC people. The leader of the U.S. Department of Education’s Office of Civil Rights, Candace Jackson, has said that in her view, “[90% of accusations] fall into the category of ‘we were both drunk,’ we broke up, six months later, I found myself under Title IX investigation because she decided our last sleeping together was not quite right.”

When leadership of an agency designed to protect students’ civil rights tries to discredit the courageous people that come forward with their experiences of sexual assault, it sends a message to young people that they shouldn’t come forward and get the support that they need.

While we are lucky to have strong protections for women and TGNC folks in New York City, our schools do not reflect that. We must make it clear to our youth that there are adults who are committed to believing and supporting students who experience sexual violence in schools. We need staff and leadership in the DOE who have the skills to shift school climate, and to ensure that schools are not reinforcing harmful messaging that is now, sadly, coming from the highest office in the land.