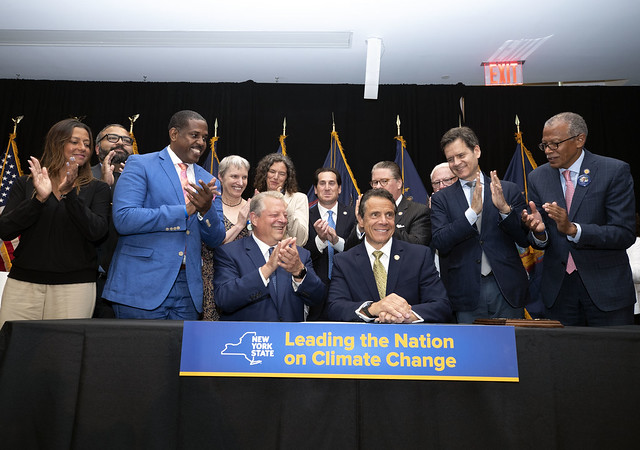 New York State has just enacted a plan to bring its planet-warming greenhouse gas emissions to 15% of its 1990 levels by 2050 and provide enough “carbon-emission offsets“ like forestation and wetlands reclamation to bring total carbon-emissions to “net-zero“ by that same year. These goals put New York at the forefront of the United States in addressing climate change.

Governor Cuomo had submitted a similar proposal in his executive budget in January of this year, entitled the Climate Leadership Act, but the Legislature did not adopt it in the April budget. Instead, it reformulated the proposal to provide a more highly developed and detailed planning process to implement the transition to a carbon-neutral society and economy by the goal year of 2050.

To be sure, the governor deserves great credit for already moving New York in this direction, using the state’s powers to usher in substantial increases in wind and solar power over the past several years and repeatedly enunciate and affirm goals of increasing renewable energy and setting a policy of achieving 80% reduction in greenhouse gas emissions by 2050.

In June, the state Legislature passed a bill -- The New York State Climate Leadership and Community Protection Act -- at the end of its 2019 legislative session, which Governor Cuomo just signed into law, creating a broadly inclusive public participation process along with a step-by-step planning and regulatory decision-making structure for the energy transformation.

A Climate Action Council is created consisting of 12 New York State agency heads and 10 non-governmental individuals who will spend several years scoping out a plan to implement the transition and vote to present their recommendations to state government leadership by 2022.

In 2023 the state agencies will then incorporate the recommendations into ongoing regulatory actions to bring the residential, commercial, industrial, transportation, and electricity-generation sectors of New York’s economy toward the greenhouse gas emission reductions needed to reach the goals.

The legislation also mandates that disadvantaged communities, which have borne the brunt of pollution and climate change, share in the benefits of the transformation in a major way, to receive a goal of 40% of the benefits and a legal minimum of 35% of the benefits.

By 2030 New York’s goal will be to reduce greenhouse gas emissions 40% below its 1990 levels, including achieving electricity generation from 70% renewable sources of energy, and a carbon-neutral electricity-generation sector by 2040. The State Public Service Commission (PSC), regulator of the state’s electric utilities, is directed to a more expedited schedule for the electric generation renewable goals since 2030 is in fact not really so far away for this important sector of the state’s economy.

The goals are far from unrealistic, because in part we are much closer to them than many people realize. New York’s greenhouse gas emissions are already nearly 20% below its 1990 levels, according to the 2019 State Energy Patterns and Trends published by the New York State Energy Research and Development Authority.

New York’s electricity-generation system is already in an advanced stage of transformation from a fossil-fuel based system. Coal is nearly gone; only 1% of New York’s electric generation came from coal in 2018, and the last coal-fired plants will be deactivated in 2020.

The Transmission System Needs Extra Capacity
Although New York’s electricity grid has made major progress shifting from fossil fuels, its transmission infrastructure needs upgrades and new investments to keep up the pace of bringing in more renewable power, according to the Independent System Operator (ISO), manager of the state’s electric grid.

Some wind power produced in Upstate New York has to be curtailed off the grid now because it can’t be economically transmitted downstate due to capacity limitations; the same goes for some Canadian power generation and even some of New York’s own hydroelectric generation. The ISO and the PSC have moved to permit several new transmission-line upgrades to bring power around the state more effectively, from Canada, from western New York to Eastern New York, and from Upstate to Downstate.

The Cuomo administration foresees offshore wind power around New York City and Long Island as major new sources of renewable power, and, once again, the transmission systems need to be upgraded to absorb that wind energy production. When he signed the bill on Thursday, the governor also announced the two winners of a procurement process to add 1,700 MegaWatts of offshore wind power, which may eventually produce about 5% of New York's electric power. It may realistically be 2035 before New York can get to 70% renewable power, but the Public Service Commission is authorized to modify the timetable in the CLCPA to get there.

Several of New York’s nuclear power plants will be deactivated by that time, but several nuclear plants will still be in operation in 2040 and the legislation permits that power to be counted as part of the carbon-neutral goal for the electricity-generation system.

The Independent System Operators’ most recent analysis of New York’s electric grid, Power Trends 2019, even forecasts New York will have the ability to absorb increasing use of the grid by electric vehicles, and that energy storage systems, energy efficiency measures, and demand control systems can manage the electric system’s gradual transition to renewables, along with the investments in new transmission capacity.

New York Energy Use and Renewable Transition
Although there is plenty of attention, and credit for the environmentally-beneficial progress of New York’s electric grid, greater challenges will remain for transportation, industrial, and building energy use. That’s because fossil fuel use in New York’s electricity-generation system is now only 20% of the state’s greenhouse gas emissions. The non-electricity-generation sectors, namely transportation, industry, and buildings in the commercial and residential sectors, emit 80% of New York’s greenhouse gas emissions.

Even if New York eliminated fossil fuel use from its electric generation and electricity import sectors, its greenhouse gas emissions would still be at 66% of its 1990 levels. According to its energy profiles from the United States Energy Information Administration, New York’s current baseline already has the lowest greenhouse gas emissions per capita in the nation among the 50 states, at only 50% of  the national average! New York has the second lowest energy consumption per capita of the 50 states already (Rhode Island is first).

New York’s efficiencies in large measure predate the big renewable push of recent years and are merely the general characteristics of New York’s economy. Transportation accounts for 44% of New York’s greenhouse gas emissions but it is still cleaner than the rest of the country. The New York City metropolitan area mass transit system carries millions to their destinations using much less energy per capita than the rest of America. New York is 6.1% of the U.S. population but uses only 4% of the energy consumed in the transportation sector of the U.S. (per USEIA, State Energy Data 2016).

One of President Trump’s chief environmental lunacies is the rollback of President Obama’s fuel efficiency standards for the American automobile industry. But the industry itself is highly resistant to the rollback, as are many states and foreign markets, as well as foreign producers, and progress will continue there.

As the vehicle fleet in New York turns over, efficiency improvements will continue and greenhouse gas emissions will decline. The state government and municipalities will need to promote the transition to electric vehicles and powering them from renewable energy, continue to invest in public transportation -- not just in the New York City metropolitan area but the state’s other communities as well -- and promote alternative methods of transportation.

New York has little in the way of heavy industry and its industrial sector uses only 1% of the energy used in the industrial sector in the United States. But its commercial and residential sectors use energy in closer proportions to New York’s share of the U.S. population. The residential sector uses less electricity than normal because of the high proportion of small apartments in New York City, but overall household energy use is still 15% greater than the average household because of New York’s colder weather and the fuel needed for space heating and hot water.

Improving energy efficiency in New York’s commercial and residential buildings presents serious challenges. Conservation investments for many homeowners may be too costly because they are of modest means and they will need help and subsidies to improve efficiencies. Commercial and apartment building owners may also find energy investments costly and may need tax incentives to stimulate those investments. But there is time for the residential and commercial building sectors to change.

New York’s new law directs the Climate Action Council to hold public hearings for several years throughout the state as it develops its plans, and the Council must establish advisory panels from different sectors of society, including labor and industry, to examine how to go forward. It must also work with environmental justice and just transition groups with plans for fair treatment and beneficial participation of disadvantaged communities.

New York’s state and local governments will need these inclusive processes to establish buy-in from sectors of society that may be fearful or skeptical of what a transition will look like or how they could be affected. The goals can be achieved, or New York can come very close, with the collaborative process the state has outlined for carbon-neutrality by 2050.