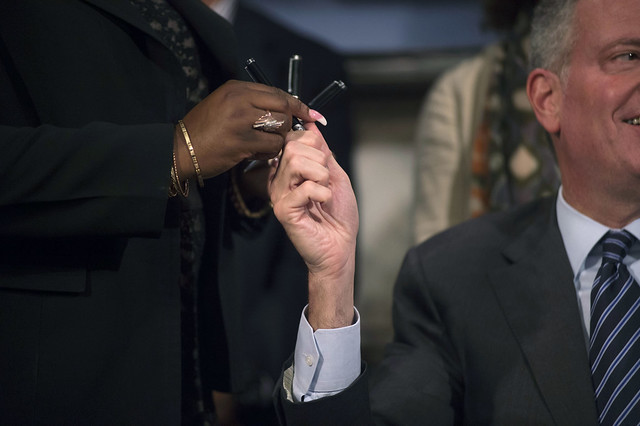 Many New Yorkers are expressing frustration at Mayor Bill de Blasio’s lack of attention to his job as he travels around the country campaigning for president. But his laid-back attitude toward the mayoralty manifested itself long before he announced his presidential candidacy.

One particularly illustrative and significant aspect of the job that he has neglected is his role in the legislative process.

First, a quick refresher on how, pursuant to the City Charter, a bill becomes a law in New York City:

-If passed by a majority of the City Council, it is sent to the mayor, who signs the bill into law.

-If the mayor takes no action within 30 days of receipt, the bill automatically becomes law without a mayoral signature (“lapses” into law).

-If during the requisite period the mayor vetoes a bill, the veto can be overridden by a vote of two-thirds of the Council and it then becomes law without further action by the mayor. (City Charter Section 37)

The potential of a mayoral veto, even if it can be overridden, creates a healthy tension that serves as a check on overreach by the Council.  By the same token, the potential of a veto override by the Council restrains the mayor from excessive use of the veto pen to block legislation that has widespread support. Thus, the process established in the City Charter creates a checks-and-balances relationship between the executive and legislative branches and requires a level of engagement by both branches in the adoption of new laws.

But in his more than five-and-a-half years as mayor, de Blasio has not vetoed a single bill of the more than 1,000 adopted by the City Council during his time in office. He has not even publicly threatened to veto a bill as an expression of his dissatisfaction with any single one of the barrage of bills that have been introduced (and enacted) during that time.

In contrast, during his three terms in office, Michael Bloomberg vetoed and was overridden on 70 bills out of the total of 987 passed by the Council.

When asked about not vetoing any bills the mayor’s response has been that his team negotiates and helps craft virtually all the adopted bills. There are some high-profile examples, especially related to the NYPD, e.g. the Criminal Justice Reform Act. He would probably also argue that the administration has been able to deter certain legislation, such as the bill to criminalize police chokeholds and the Small Business Jobs Act, though it's not clear if it's the administration or the Council speaker’s office that has been most responsible for sidetracking certain bills. But even in the Bloomberg years, when the mayor and Council speaker were clearly working hand in glove, there were still some vetoes.

Moreover, if de Blasio has played a key role in shaping so much legislation, it is difficult to explain why he has allowed the vast majority of bills passed during his terms to become law without his signature by letting the 30-day time period expire with no action on his part. Wouldn’t he want to associate himself with and take credit for all of the bills he helped shape by signing them into law?

Of the 156 bills passed by the Council so far in 2019 (as of August 23) the mayor signed only four! By comparison, Bloomberg signed all but 40 of the bills passed during his three terms.

Meanwhile, it is important to ask: haven’t there been cases in which city commissioners hired by the mayor have been opposed to Council bills (whether or not they’ve been allowed to state their dissatisfaction publicly) that they feel are unduly intrusive, costly or burdensome?

For example, surely some of the 845 reports required of city government entities, many through Council legislation, are regarded as inappropriate or unnecessary by agency heads, yet there has been no pushback by the mayor against these requirements when new ones have been added during his tenure.

Not only is this laissez-faire approach bad for morale among agency leaders, but it encourages Council members to introduce legislation on anything and everything because, well, why not? From 2014-2017, during 40 months of legislative session, 1,540 bills were introduced in the City Council; it has taken only 16 months since the 2018 session began to hit the same number of new bills. This volume of legislation is unprecedented.

Is it the case that there is a much more pressing need for City Council legislation now than there has ever been before? Or has the hands-off approach to the legislative process by this mayor led to an aggressive and “anything goes” spirit among Council members?

Let us hope that after the mayor drops out of the presidential race he will give more time and attention to exerting a restraining influence on the proliferation of proposed bills and local laws.